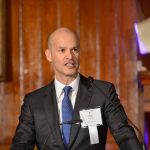 Three young scientists, including one from Harvard, are being recognized for discovering novel ways to fight the most challenging human diseases and explore the depths of space with today’s announcement of the winners of the 2016 Blavatnik National Awards for Young Scientists.

The awards, given annually by the Blavatnik Family Foundation and administered by the New York Academy of Sciences, honor the nation’s most exceptional young scientists and engineers, celebrating their achievements and recognizing their outstanding promise. Each laureate receives $250,000, the largest unrestricted cash award given to early career scientists.

This year’s Blavatnik National laureates are:

The three laureates were selected from a pool of nominations submitted by 148 of the nation’s leading universities and research institutions.

Growing up in a family of scientists, Charbonneau’s interest in science was encouraged from a young age. As a Scout, he used to take a star chart with him on canoe trips in Ontario. At the end of high school, he read “A Brief History of Time” by Stephen Hawking, and many of the ideas — relativity, quantum mechanics — seemed magical at the time, and compelled him to study further.

When he arrived at Harvard to begin graduate school in astronomy, Charbonneau was certain that he would work on theoretical astrophysics and cosmology. However, in 1995, the first exoplanet (a planet outside the solar system) orbiting a sun-like star had just been discovered. This discovery posed so many simple but unanswered questions that Charbonneau was encouraged by his mentor, Robert Noyes, to try his first project in planets. He never looked back.

“For generations, humans have looked up at the stars and wondered if there existed inhabited worlds other than our own. We are the first generation in human history with the technological ability to answer that question,” said Charbonneau, when asked about the inspiration behind his work.

At 41, Charbonneau is considered very senior in exoplanet research, a field that has gone through a remarkable transformation from its infancy 20 years ago to one of the most active and competitive directions in astrophysics.

Charbonneau’s discoveries have opened the floodgates for search and discovery outside our cosmic neighborhood. In 1999, while still a graduate student, Charbonneau was the first to observe a transiting exoplanet.

The transit method proved to be extremely fruitful in discovering exoplanets and granted new access to characterizing their properties — their atmospheres, weather, and the degrees to which they are similar to Earth. Throughout his career, Charbonneau’s unifying purpose has been to develop new methods to answer key questions about exoplanets, and a number of his methods have become standards of the field.

With more than 3,000 exoplanets discovered thus far, a major question remains unanswered: Is there life elsewhere in space? To determine this, Earth-like planets and their atmospheres need to be studied for the presence of elements that indicate life. Ever the celestial detective, one of Charbonneau’s latest projects is MEarth, a network of eight robotic telescopes in Arizona and Chile that search for candidate planets orbiting the closest and smallest stars to undertake more detailed studies.

The big question Charbonneau is working on now is the detection of atmospheric biomarkers, such as oxygen, the molecules that we can detect in the atmosphere of a distant world that might permit us to infer the presence of life.