White and male and seen all over 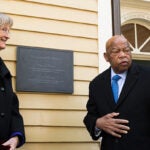 Institutions from corporations to colleges often boast a “wall of fame” of portraits or photographs of their founders or famous members. But when those walls are almost exclusively white and male, it sends a message that can have psychological and performance effects, two researchers said at a recent public discussion put on by the Faculty of Arts and Sciences.

“Part of one’s personal identity … comes from our group memberships and the social categories to which we belong,” such as age, gender, ethnicity, religion, ethnicity, and sexual identity, Mary Murphy of Indiana University told a Harvard audience at “Identity Threat at Work,” the third and final Diversity Dialogue for the academic year.

The dialogue also focused on how “situational cues influence interracial interactions and friendship in real-world academic environments,” according to program organizers. Katherine Emerson, a research associate at Mills College, co-hosted the discussion with Murphy.

“Our identity becomes differentially salient based on the different contexts we find ourselves in,” Murphy said. When the environment provides cues that the people of importance are those with whom we do not identify, it constitutes a threat of “being devalued and disrespected because of our social identities,” she added.

Tina Bowen, production manager at the Memorial Hall/Lowell Hall Complex, who was one of more than 165 people taking part in the discussion on March 31, said it “changed the way I view my environment.” 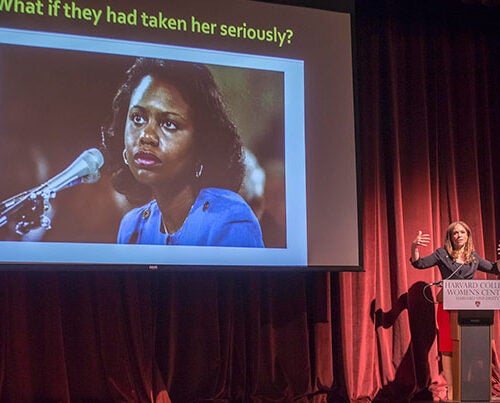 “What looked like mere homages to Harvard’s past now represent the reinforcement of our segregated history. When as influential a room as Annenberg Hall is filled with statues, portraits, busts, and stained glass of predominantly white men, does that signal to women and minorities a message they don’t belong?” she asked.

In a PowerPoint presentation, the researchers noted that another element of social identity threat is the risk of confirming, or being seen to confirm, a negative stereotype about one’s own group. It requires knowledge of societal stereotypes, but not personal belief in them.

Murphy likened it to “a snake loose in the house. It’s a thing that feels uncomfortable. Stereotype threat interferes with intellectual performance.”

She cited studies that illustrate how social identity threat can negatively impact almost anyone. The damaging stereotypes include assumptions that women and girls perform worse than men and boys in STEM fields; African-American and Latino do worse than white students; white men are worse than Asian men in math, and cannot jump as well as black men in basketball games; women do not drive well; men test poorly on emotion recognition and sensitivity; women in leadership positions sacrifice warmth for competence; and racial and ethnic minorities are less-effective leaders.

Stereotypes and situational cues shape people’s experiences and performance in the workplace, Murphy and Emerson said.

“They include numerical underrepresentation, hierarchical representations and physical environment, symbols we use to say what we value (walls of fame), diversity philosophies, informal and subjective hiring and promotion policies, organizational mindsets,” said Murphy.

The researchers said that institutions can take steps to reduce identity threat, and cited an incident at Facebook when employees were asked to write comments and thoughts on a wall. After one employee wrote “Black Lives Matter,” another crossed out the word “Black” and replaced it with “All.” CEO Mark Zuckerberg called the action malicious, and urged employees to participate in a town hall meeting to “educate themselves about what the ‘Black Lives Matter’ movement is all about.”

Murphy said Zuckerberg’s response was significant because it came from the very top of the organization, and opened the door to discussion. She and Emerson urged other organizations to make their messages and cues more inclusive without reducing standards, and to think about structure and cues in their environments. They said workplace environments should minimize threats to belonging and potential, without “institutional signs that you don’t belong and can’t cut it.”

The program was offered by the FAS Dean’s Office, FAS Human Resources, and the FAS Office of Diversity Relations and Communications.