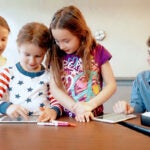 Black holes have long been painted as eternal prisons, regions of space so dense that nothing — not even light — can escape them. But the truth, Stephen Hawking told a packed Sanders Theatre this afternoon, is that the holes aren’t as black as you might think.

In a session that was the hottest ticket on campus in some time, the renowned Cambridge theoretical physicist and cosmologist spoke to more than 1,000 faculty, students, and staff at Sanders, with dozens more watching at simulcast sites in the Science Center and at Jefferson Lab.

Hawking’s lecture focused on his research into black holes and the information paradox, which suggests that physical information is permanently lost in such holes, a controversial notion that violates the scientific tenet that information about a system from one time can be used to understand its state at any other time.

“It is said that fact is sometimes stranger than fiction, and nowhere is that more true than in the case of black holes,” Hawking said. “Black holes are stranger than anything dreamed up by science fiction writers, but they are clearly matters of science fact.”

Over the years, Hawking said, the murky nature of black holes has forced scientists to grapple with theories that can contradict each other and — in some cases — our basic understanding of the universe. Early theories argued that black holes retain virtually no information about the stars from which they formed, he said. Instead, only their mass, angular momentum, and electrical charge were preserved.

“Apart from these three properties, the black hole preserves no other details of the object that collapsed,” he said, describing the theory. “For example, the final black hole state is independent of whether the body that collapsed was composed of matter or antimatter, or whether it was spherical or highly irregular.”

“This created a paradox about the nature of black holes. One theory suggested that black holes with identical qualities could be formed from an infinite number of different types of stars; another suggested that the number could be finite,” Hawking said. “This is a problem of information.”

If the information about the bodies that form black holes is not lost, Hawking said, then “black holes contain a lot of information that is hidden from the outside world.

“If the amount of hidden information inside a black hole depends on the size of the hole, one would expect, on general principles, that a black hole would have a temperature and would glow like a piece of hot metal,” he continued. “But that was impossible because, as everyone knew, nothing could get out of a black hole — or so it was thought.” 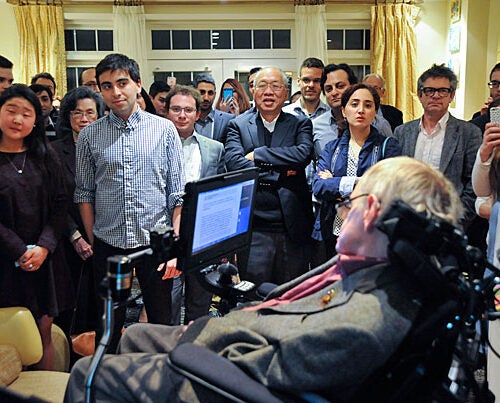 In early 1974, Hawking began to challenge that axiom when he discovered particles emitting from a black hole at a steady rate.

“Like everyone else at that time, I accepted the dictum that a black hole could not emit anything,” he said. “What finally convinced me that it was a real physical process was that the outgoing particles had a spectrum that was precisely thermal.”

That outflow, later dubbed Hawking radiation, was among the key ideas that revolutionized science’s understanding of black holes by suggesting that at least some energy could be emitted by the mysterious phenomena.

Currently the Dennis Stanton Avery and Sally Tsui Wong-Avery Director of Research at the Department of Applied Mathematics and Theoretical Physics and founder of the Centre for Theoretical Cosmology at Cambridge, Hawking is arguably best known as the author of the best-selling book on cosmology “A Brief History of Time.”

In 1963, Hawking was diagnosed with a rare, slow-progressing form of Amyotrophic Lateral Sclerosis, and was given two years to live. Despite that diagnosis, he went to Cambridge University, where he would serve as the Lucasian Professor at Cambridge — a post once held by Isaac Newton — for three decades.

Hawking’s contributions to understanding the universe have been called the most significant since Einstein. Hawking theorized correctly that black holes emit radiation. He was also the first to describe a theory of cosmology that united general relativity and quantum mechanics, and is an ardent supporter of the “many worlds” interpretation of quantum mechanics.

As black holes emit particles, they will eventually lose mass, shrink, and disappear, but the question of what happens to the information they held remains.

If that information is truly lost, Hawking said, that strikes at the heart of our understanding of science.

“For more than 200 years, we have believed in the science of determinism, that is that the laws of science determine the evolution of the universe,” he said. “If information were lost in black holes, we wouldn’t be able to predict the future because the black hole could emit any collection of particles.

“It might seem that it wouldn’t matter very much if we couldn’t predict what comes out of black holes — there aren’t any black holes near us,” he continued. “But it’s a matter of principle. If determinism — the predictability of the universe — breaks down in black holes, it could break down in other situations. Even worse, if determinism breaks down, we can’t be sure of our past history either. The history books and our memories could just be illusions. It is the past that tells us who we are. Without it, we lose our identity.”

To understand whether that information is in fact lost, or whether it can be recovered, Hawking and colleagues, including Andrew Strominger, the Gwill E. York Professor of Physics at Harvard, are currently working to understand “supertranslations” to explain the mechanism by which information is returned from a black hole and encoded on the hole’s “event horizon.”

Following the lecture, Hawking answered three questions from audience members, including one about his recently announced Breakthrough Starshot project, which aims to send probes to the nearest star system, Alpha Centauri.

“The solar system contains nowhere” that is “as favorable to human life as the Earth,” Hawking said. “The moon is small and has no atmosphere. Mars is also smaller than the Earth. It has a thin atmosphere, but it is not enough to breathe or protect us from cosmic radiation, so astronauts will have to live underground. To find somewhere like the Earth, we have to boldly go to the stars.”