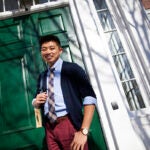 At the time, I thought managing to score a ticket to Stephen Hawking’s talk at Sanders Theatre was likely the high point of my science-writing career at Harvard — after all, I’d be seeing in the flesh the man some consider the most important physicist since Einstein.

But that was before I talked with Cumrun Vafa.

The day after Hawking’s talk, as I was still feeling the afterglow of the event, the Donner Professor of Science called with an offer that nearly made me drop the phone. Would I be interested in attending a dinner party in Hawking’s honor?

My brain screeched to a halt before I managed to stammer my answer. “Yeeeessss?”

A little more than 24 hours later, I found myself knocking on Vafa’s front door, ready to enjoy a Persian feast in the company of Hawking and a good portion of Harvard’s Physics Department. The night would include a sumptuous dinner of kebabs and other Persian delicacies, traditional folk songs, and a “black hole cake.”

When it came time for Hawking to speak, before a group of 70 crowded into Vafa’s living room, he delivered a story not about science, but about a trip he took to Iran in 1962, shortly before he was diagnosed with amyotrophic lateral sclerosis.

After completing his bachelor’s degree at University College, Oxford, Hawking set out to travel with the support of a small grant, having chosen Iran based on the theory, he said, that “my chances of getting one would be greater the further I proposed to go.”

Hawking and his companion, a fellow Oxford student, traveled to Istanbul and then through Turkey by rail. After boarding a bus to cross the border into Iran, they made a circuitous journey from Tabriz to Tehran and across the nation’s central desert.

“On the way home, we were caught in the Buin Zahra earthquake, a massive 7.1 Richter quake that killed over 12,000 people,” Hawking said. “I must have been near the epicenter, but I was unaware of it because I was ill and in a bus that was bouncing around on the uneven Iranian roads.”

Over the next several days, Hawking worked to recover from a severe bout of dysentery and a broken rib he suffered after he was thrown against a seat on the bus. He didn’t know about the disaster because he didn’t speak Farsi. 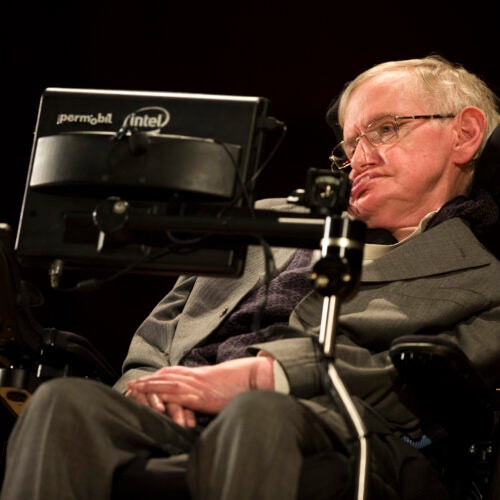 “It was not until we reached Istanbul that we learned what had happened,” he said. “I sent a postcard to my parents, who had been anxiously waiting for 10 days, because the last they had heard, I was leaving Tehran for the disaster region on the day of the quake.

“Despite the earthquake, I have many fond memories of my time in Iran, and would like to return one day. I am happy to be here with you all tonight. Now, as they say in Iran, ‘Nooshe jan!’”

While it’s natural to think of Hawking as one of the most celebrated scientists in the world, it wasn’t until I saw accomplished physicists snapping photos of him that I fully appreciated what that meant.

Evan Brown, a Kirkland House junior and one of the handful of lucky undergrads at the dinner, summed it up best: “It’s amazing to see people who are very smart and accomplished be intimidated.”