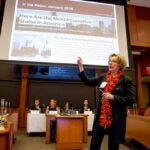 Kennedy School project sheds light on who is giving, where and how

Read this story in Chinese: “中国最慷慨的百名慈善家”

China has emerged in recent decades as a global economic powerhouse, so important that any slowdown in its economic growth or increase in its stock exchange volatility, as in recent weeks, can rock international markets. During China’s rapid rise, many of its citizens became fabulously rich. Yet little is known publicly about this first generation of self-made billionaires and how they are sharing their newfound wealth.

Now, researchers at the Ash Center for Democratic Governance and Innovation at Harvard Kennedy School (HKS) for the first time have mapped the philanthropic activities of mainland China’s top 100 largest donors in 2015, examining not just who they are and how much they have, but in what sectors they made their fortunes, how much they give, which causes they support, and which areas of the country benefit from their giving.

“People are now paying so much attention to the habits of China’s richest citizens. Thirty years ago, everybody was equally poor,” said Peiran Wei, M.C./M.P.A. ’15, an Ash Center fellow who led the project’s data collection and site design. “In the context of philanthropy — where they donate, who they give it to, things like that — the data becomes a very important tool, not just to ordinary people, but also to the government and to business and to people who want to do good things. It’s their influence and their financial might that matters.”

The goal of the newly launched “China Philanthropy Project” and related website is to provide valuable interactive data for ongoing research into Chinese philanthropic patterns and trends and to become a repository for nonprofit organizations, governments, academia, and the media. The researchers hope that by quantifying detailed annual philanthropic data, it will help future donors to make better-informed decisions about where to give and where support is needed, and perhaps even to prompt some healthy competition among donors to see who is “most generous” each year.

How to give in smart and meaningful ways is a primary concern of the newly rich, Wei suggested, since “they’re the first generation to be rich, so they have no idea what’s the best way to give back to society.”

“It’s the Gilded Age, but it’s the Gilded Age without a lot of the religious underpinnings and architecture in the United States … so you don’t have that code of conduct in terms of how and why you give,” noted Edward Cunningham, director of the China Public Policy and Globalization Program at HKS. “That’s why there’s a casting about to kind of figure out … what should be informing the giving.”

According to the research, the vast majority of the top 100 are men, 54 years old on average, and hail from wealthier provinces like Guangdong, Beijing and Fujian, where commercial and governmental activity is high. They tend to give back to organizations in their home provinces, which means that poorer areas such as Tibet, Xinjiang, and Yunnan rarely benefit.

Many on the list made their fortunes in real estate development, as the country’s rapid urbanization has prompted an urgent need for housing. Most donate to educational causes, making major gifts to top universities for scholarships and buildings. Surprisingly few gave to environmental charities despite China’s poor air quality. Wei speculates that the high social value and the immediate impact of educational giving are more attractive to donors than tackling deeply challenging, long-term projects like trying to safeguard air or water.

“No doubt, the philanthropists themselves will be interested in looking at their ranking and what the other people are doing and what they can do better next year. I think the government will be interested because nobody has seen such a full picture before in terms of the geography,” said Wei. “One of the reasons we wanted to [map the elite] is for the NGOs, so they know who is the most generous individual in their region each year.”

Because China’s charitable world is still relatively new, recordkeeping of giving is scattered and there is little independently reported data, such as donor databases or IRS 990 forms to easily dive into. The researchers undertook a complicated verification process of the data using a mix of publicly available data, press reports, interviews, and other governmental sources.

More broadly, philanthropy in China is still relatively small. In 2014, giving as a percentage of China’s gross domestic product (GDP) was 0.1 percent. By comparison, in the United States, it was 2.0 percent of U.S. GDP. India gave a percentage four times greater than China, while Russia gave one-tenth of what China gave. “So there’s a long way to go for the Chinese,” as the second-largest economy in the world, said Wei.

With so much economic and social upheaval in the past 10 to 15 years, the members of China’s economic elite aren’t motivated by tax breaks, of which there are very few, but apparently by a desire to cement their individual and family legacies.

“I think part of the motivation is that they’re trying to create a road map for their own children and future generations in terms of not just giving back, but trying to ground the younger generation in terms of priorities,” said Cunningham. “There’s a deep concern that the second generation, let alone the third generation, will not be as successful, not only because they didn’t have to go through the same economic hardship and trauma like what occurred during the Cultural Revolution, but also because they lack the benefits that came from the dense social ties of traditional Chinese society.”

Wei said many of China’s billionaires are curious about their American counterparts, such as the Rockefeller family, and about what the best practices are in the United States. A number have established their own foundations, but even as they look to models like philanthropists Andrew Carnegie and Cornelius Vanderbilt for guidance, “what works in the U.S. probably doesn’t work in China, so they have to come up with their own solutions for Chinese society,” Wei said.

Creating a generation of people who have privatized much of the economic gains in a formally communist system has important social implications, said Cunningham, such as how the new rich interact with state authority. “One big question is what role will these individuals play in China’s broader political, social and economic debates moving forward?” he said.

Because the concentration of wealth is so narrow, an ongoing worry for the state and the party in China is how easily that money can be moved out of the country. Chinese banks have been scrambling to create private wealth products to serve the rich and keep them from turning to U.S. and European banks eager for their business. “For quite some time, people have been focused on the needs and the aspirations and the motivations of these people because the impact economically is significant,” said Cunningham.

Now that they’ve made their fortunes, some Chinese philanthropists are still trying to figure out how they as individuals might redress the provincial disparity through the creation of their own foundations, “but they’re trying to do it and negotiate with a state that hasn’t yet set up rules to allow that professionalization to happen,” said Cunningham.

“They’re operating in a changing and difficult regulatory environment, and so it’s not clear how they can grow sustainably,” said Cunningham. “That’s why there’s a long way to go.”