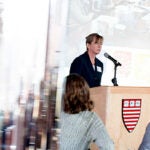 Harvard analysts behind a new book on air quality in China see in its polluted clouds a possible silver lining, one that would address both pollution and rising emissions of climate-warming carbon dioxide: a tax on carbon.

Reports from the world’s most populous nation regularly detail the horrid air quality afflicting many of its urban areas — including the virtual shutdown of Harbin, a northeast city of 6 million, in October. There has also been ample coverage of China’s ascendancy to the top of the ranks of carbon dioxide emitters.

But what’s less well known, the analysts say, is that China in recent years has taken aggressive actions to try to improve air quality and cut greenhouse gas emissions.

In the last 10 years, China has developed the world’s largest capacity for wind power, with plans to triple that capacity by 2020. The plans also call for a threefold increase in the country’s hydropower, already the most substantial in the world, between 2005 and 2020, and a major increase in its nuclear capacity over the same period.

China is increasing imports of natural gas, which burns cleaner than coal. And it has mounted some pollution-control measures, which have disappointed against overall pollution but, through strongly enforced controls enacted between 2006 and 2010, managed to significantly reduce one pollutant — sulfate fine particles.

Mostly, though, China’s roaring growth, mainly fueled by coal, has outmatched controls. Other factors include the complex nature of the country’s pollution, and the fact that scientific understanding of the processes involved is incomplete.

“The government must take responsibility … but it’s a much more complex challenge than most realize,” said Chris Nielsen, executive director of the Harvard China Project. “The nature of the air pollution problem is changing and has more diverse causes than is portrayed in the popular media. … We want to inform that discussion and help people understand that there’s a lot the government can do, but the science needs to keep advancing too.”

A “command and control” approach can work for single pollutants — in fact it has worked in the United States — but China is so large and complex that picking off threats one at a time through regulations may not be the best approach, said Mun Ho, an economist and visiting scholar at Harvard’s Institute for Quantitative Social Science.

Instead, Nielsen and Ho, editors of “Clearer Skies Over China: Reconciling Air Quality, Climate, and Economic Goals,” released in November, propose market-based solutions — in particular a carbon tax — as part of an incentives-based antipollution strategy that would penetrate the entire economy. As for the common concern that such a tax might hurt industry and growth, the analysts say that if the measure were designed to be revenue-neutral and offset by rebates to consumers, by business tax reductions, or by subsidies to the hardest-hit industries, its impact on the economy would be muted.

The book, Nielsen and Ho said in an interview, is intended to provide a detailed review of the air pollution situation in China today, using both government statistics and independent scientific measurements, as well as a thorough assessment of the impact a carbon tax might have.

Published by the MIT Press, “Clearer Skies” is divided into two main sections. The first provides an overview of the issues and summaries of the book’s policy assessments, written for policymakers and others who don’t have the rigorous economic or scientific background that defines their mechanics. It examines the state of China’s air quality, and explores both the successful sulfur dioxide reduction campaign from 2006 to 2010 — estimated to have prevented as many as 74,000 premature deaths in 2010 alone — and the effects of a hypothetical carbon tax between 2013 and 2020.

The second section is a series of in-depth studies underlying the findings, several by collaborators from China’s Tsinghua University, with which the Harvard China Project runs an atmospheric monitoring station north of Beijing. The studies bridge economic and scientific dimensions.