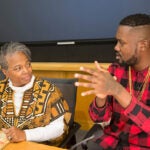 Civil rights, then and now

Last year, Winifred White Neisser was thinking about a career change when the longtime television executive heard about a Harvard program that could help her chart a new path.

Neisser enrolled in the Advanced Leadership Initiative (ALI), a fellowship that helps professionals transition to new careers aimed at solving societal problems. Starting with 13 fellows in 2009, ALI has grown steadily, with 43 in the current crop and 48 in the cohort that starts later this month.

“I’ve always had a real love for the University,” said Neisser ’74, a former member of the Board of Overseers. “So the idea of coming back to Cambridge and spending time trying to figure out my next chapter was very appealing.”

‘ALI is an open window on the world, a journey to widen our horizon and address issues with new eyes.’ — Nouzha Chekrouni, ALI fellow

The fellowship offers access to courses across Harvard, in business, education, government, law, public health, and medicine. Fellows range from corporate executives to heads of nonprofits.

Participants each identify a challenging societal issue and develop a plan to help solve it. They also take a leadership course, attend “think tank” sessions, and have full access to other University resources, including the opportunity to audit classes. Final plans are presented at a November symposium.

Neisser, who spent 34 years as an executive with NBC and Sony Pictures Television, said she selected arts education for her project because of discussion she heard during the fellowship about “21st-century skills and the need to provide opportunities for kids to be creative and innovative.”

“We saw the opportunity to help the University engage with society, and with big societal problems, which Harvard increasingly wanted to do as One Harvard,” said Kanter, who is the chair and director of the program. “The problems themselves seemed to be more abundant, or at least more visible, and tended to have a cross-disciplinary character.”

The idea, she said, was to enlist “a whole new population of people with leadership skills and experience … who could work on those problems and start by engaging with Harvard.”

Charles M. Fleischman ’80, another member of this year’s group, co-founded and served for 16 years as president of Digene Corp., the biotechnology company that established the link between the HPV virus and cervical cancer.

“I thought it was the kind of thing I would find challenging and fulfilling,” he said.

His wife, Lisa Claudy Fleischman ’80, joined him as an Advanced Leadership Partner, a designation offered to partners who want to access University resources during the fellowship year.

For his project, Fleischman this fall helped forge a coalition among Native American tribes and other groups opposing a proposed development project that includes a tramway from the rim of the Grand Canyon to the bottom. A longtime river-rafting enthusiast, Fleischman has led rafting trips at the Grand Canyon for 20 years.

When the interested groups gathered at the Grand Canyon in September, “I guided a 14-foot raft through the rapids of the Colorado River and when we were not on the river used my formal ALI leadership skills and moderated discussions among the multiple stakeholders in the coalition.”

Nouzha Chekrouni came to ALI from service in Moroccan government that included posts as a cabinet minister and as ambassador to Canada. During her fellowship year, she laid the groundwork for a Morocco-based institute that will work to expand entrepreneurial opportunities in African nations.

“ALI is an open window on the world, a journey to widen our horizon and address issues with new eyes,” Chekrouni said by email. “I discovered new ways to frame issues, build a critical mass, and orchestrate complex socio-economic change.”

For Mario A. Porto Fonseca, the fellowship was a chance to forge a new path after 20 years as a steel industry executive in his native Brazil. Fonseca, who is also a farm owner, plans to work with Brazilian agricultural cooperatives to promote sustainable agriculture as a way of reducing migration from the countryside to cities.

“My experience was incredibly rich, both personally and professionally,” he said by email. “I am bringing back to my country a handful of ideas and experience that will help me work to counter urban social pressures and promote rural economic growth by making farms more sustainable.”