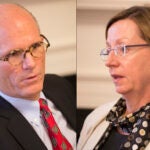 In annual report, a slight surplus

Tiq Milan and Van Bailey bring their stories to light

For Tiq Milan, being a man was intentional. “I had a girlhood. I did identify as a girl, then there was a shift.” Milan said he was not born in the wrong body; he just grew away from it.

“I remember crying to my mother, ‘Why am I not a boy?’ It wasn’t because of gender, it was because boys could do anything they wanted — climb trees, get dirty. I wanted to get dirty. As a girl, I had to sit on the porch and watch, and I did not want to do that. There were limitations being placed on me that I did not deserve,” he told an Emerson Hall audience on Oct. 28.

Milan, a writer and journalist who carved a niche for himself as a media advocate and one of the leading voices for transgender equality, shared his thoughts and life story during a panel discussion, “Transgender in America.” The panel included Van Bailey, director of the Harvard College Office of BGLTQ Student Life, and was moderated by Vincent Harris, an administrative fellow for the Harvard College Women’s Center.

Bailey said his trans journey was very different from Milan’s. “Do I think that I personally had a girlhood? No,” he said. “But do I think I was wrestling with labels that were being placed on me? Sure. But, it’s very complicated. I grew up with parents who allowed me to be genderless, until I reached puberty. My family seemed to have more problems with the notion that I might be attracted to women than they did with the gender identity. An attraction to women is something that they really struggle with.” 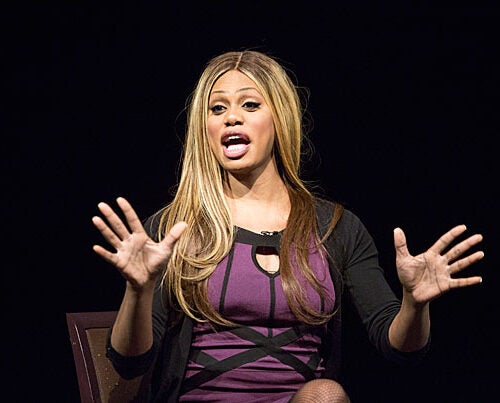 There was a great deal of discussion about manhood and what it means to be a man. “For me, on becoming a man, I felt I was sold the biggest dream” Milan said. “I was told that masculinity was supposed to be this place of strength and rationale and it was supposed to be this place of stoicism; it is not. It is fragile, and it’s easily broken and easily toxic,” he said. “All men need to have a difficult conversation with themselves, and interrogate how you perpetuate misogyny and sexism in your life and in the system.”

Both Milan and Bailey agreed that transgender people face a life of constant danger and violence. “The number one reason for bullying is about gender,” Bailey said. “A lot of folks think it’s around sexuality, but it’s around gender.” Milan added that many transgender women, if not attacked by other people, frequently get arrested when just walking down the street because police think they are prostitutes. And, he added, “Trans women of color are the most susceptible to violence.”

What responsibility do schools have to educate students about trans and other gender issues, Harris asked the panel? Children are sexual beings and start experimenting and exploring and playing around with their gender when they are very young, Milan said. They need to have a good foundation for how to negotiate their own desires. They don’t need to be shamed for that, but they may not have had the information needed to negotiate their own desires by the time they get to college.

“I didn’t learn about sexuality, desire, and consent,” said Bailey said. “That language wasn’t there. I didn’t learn about it from a classroom, I learned about it from cis-straight men. If young people are not going to get it from folks who have the background and the education and the language” to understand gender and sexuality issues, they are going to get it elsewhere, he said.

The panel agreed that students are not coming to college with the language and the tools to negotiate these issues, and schools must be prepared to educate them. Bailey said that conversations like last week’s are great, but they must be ongoing and continuous.

“Transgender in America” was sponsored by the Faculty of Arts and Sciences Office of Diversity Relations and Communications, and the Harvard College Office of BGLTQ Student Life.