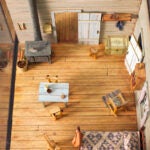 “There’s a lot to Laverne Cox,” said the actress Monday afternoon when asked to describe her upbringing.

In an interview with Brianna Suslovic ’16 and Maddie Studt ’16, Cox, one of the breakout stars of the acclaimed Netflix series “Orange Is the New Black,” spoke about everything from her Southern roots to her activism and rise to fame as a transgender African-American actress.

“Growing up in Alabama, I didn’t have the language, but I knew I was feminine,” she said. “I was bullied as a kid from preschool on, chased home from school everyday.”

Being transgender and black has made her work harder to be taken seriously in her craft, Cox said.

“I’ve sometimes overcompensated out of insecurity, or fear that I’ve not been good enough, or people are going to make these assumptions about me anyway,” she said. “Now I’m learning that I am enough as I am. When we hustle for worthiness, we don’t believe inherently that we deserve that worthiness. I’m trying to be authentically myself, while remaining teachable in the process.”

On “Orange Is the New Black,” Cox portrays Sophia Burset, an imprisoned transgender woman. The show has been lauded for showcasing marginalized voices and bringing transgender issues to the forefront of popular culture.

“Our characters are written with such depth and humanity and such multidimensionality,” said Cox.

Before joining the show, Cox produced and starred in VH1’s “TRANSForm Me” and was a contestant on VH1’s “I Wanna Work for Diddy.” But with the popularity of “Orange Is the New Black,” said Cox, “everything has changed.”

“I can’t walk through the airport now,” she said. “And I love all of you, but if you see me in the airport, I am not ready to talk!”

The biggest life change, she divulged, is having a broader platform to be an activist for transgender people. “I’ve been talking about this for years, and now people are listening,” she said. Cox has been an outspoken supporter of CeCe McDonald, an African-American transgender woman who was jailed in 2012 for stabbing and killing an attacker, and regularly speaks about violence against transgender people of color.

Delving into life on the set of “Orange Is the New Black,” Cox said that while filming season two, the cast bonded more than during season one. “We sing a lot on set,” she said. “Mostly Beyoncé!” The new season premieres on Netflix on June 6.

As far as plot spoilers go, Cox was mum, allowing only that Lorraine Toussaint comes onboard to play a character named Vee, and that viewers are in for a shakeup. “It’s major,” she promised.

When asked whether she believed Hollywood would ever cast transgender actors in nontrans roles, Cox was positive. “I do believe that,” she said.

In her own career, Cox said she wants to keep acting, work with great directors on great projects, and “continue to be challenged.” In discussing the “sensationalized, trivialized” ways that transgender stories are presented in the media, Cox said, “There’s a focus on transition and surgery, and I believe that objectifies trans folks, and that becomes the only takeaway.”

Discussing how to combat ignorance about transgender people, Cox said, “It’s up to each and every one of us to have those conversations and spark those conversations. You can even use ‘Orange Is the New Black’ as a jump-off. I believe if we approach people with love and empathy, I think that can be the beginning of a wonderful revolution.”

At the end of the conversation — which was sponsored by the Harvard Foundation, Office for the Arts at Harvard, Harvard College Women’s Center, Harvard Gay and Lesbian Caucus, Queer Students and Allies, and Office of BGLTQ Student Life — Cox was overwhelmed by an impromptu Harvard Veritones performance of the show’s theme song, “You’ve Got Time” by Regina Spektor.