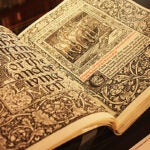 On a recent Monday afternoon, students drifted into the studio classroom on the third floor of Farkas Hall, the home for Harvard’s new concentration in Theater, Dance & Media.

The usual chorus of hellos was soon eclipsed by a type of quirky applause. Students gathered in a circle and one began clapping out a beat; the next student had to clap that beat, then add to it. The next student in the circle clapped both those beats, then added another, and so on. It was feverish and frenetic and typically broke down around the seventh or eighth clapper.

“Look at the person next to you,” encouraged Professor David Chambers, who led the warm-up exercises. “It can help you connect to them.”

Later, one by one, students left the room, and then re-entered and quickly revealed something about themselves. One tall man with a British accent backed into the class, turned and quietly said, “My brother is an ocean away from me.”

“What I am trying to get them used to is the idea of what I call private secrets in public places,” said Chambers, “where you are able to reveal something about yourself, which is a risk … to create an artistic truth.”

That type of creative risk is the operating ethos behind Theater, Dance & Media. Announced in the spring, the concentration builds on Harvard’s thriving creative spirit and its drive to merge the arts more fully with campus life and the curriculum.

Though studies will draw mainly from the wide range of courses already available to Harvard undergrads, as well as existing resources such as Harvard’s Dance Program, the Office for the Arts, and the American Repertory Theater (A.R.T.), there are some new offerings and requirements. Students will take a sophomore and junior tutorial, and this fall, a number of students signed up for a new class with Chambers, a longtime professor of directing at the Yale University School of Drama and a visiting professor whose Harvard class explores the Russian method of converting the written word into stage action.

Chambers was familiar with Harvard’s longstanding desire to establish a formal concentration involving theater. He tells the story of English Professor George Pierce Baker, who, frustrated with Harvard’s lack of support, departed for Yale in 1925 taking with him his course Workshop 47. Baker would go on to found Yale’s famous drama school. 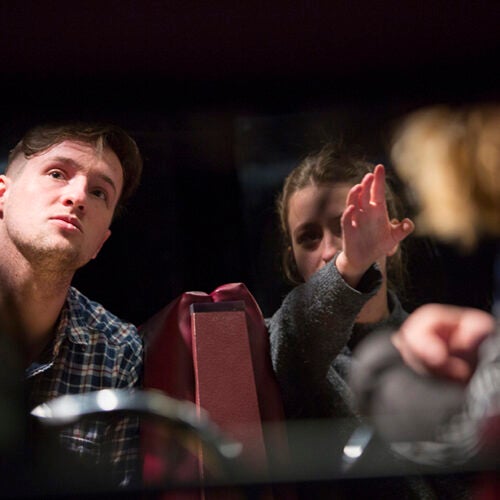 FAS approves a new concentration in the arts

According to Chambers, when Baker left, a Harvard Crimson headline read “Yale 47 Harvard 0.” A friend told Chambers before he departed for Cambridge that the score line had been reversed. “They said, ‘Now it’s Harvard 47 and Yale zero.’” And for many, including Chambers, the new concentration offers students a winning recipe. Too often theater and dance programs end up in arguments over real estate, he said.

“There’s no synchronicity, academically or artistically; they are just stuck in the same room or the same building and they end up having border wars. … This felt much wiser than that.” The “cross-fertilization” of the Harvard concentration was “thrilling,” he said.

“That’s important, that’s significant. That is a huge change in perspective. That those three areas should live under the same tent, happily so, and coordinately so, and progressively so … [it’s] what you might call a lateral or horizontal major, the idea that the student could move through, and maybe even should move through, all three of those disciplines.”

In Chambers’ class there are a range of students: several freshmen and sophomores, one junior, a group of seniors. Many of the younger undergrads plan to declare Theater, Dance & Media as their concentration; others have added it to their curriculum as a secondary field.

One of the concentrators is sophomore Julia Belanoff, who opted for Harvard over a conservatory program because of its strong extracurricular theater scene and the swirling rumors of a concentration — a signal ????that people at Harvard wanted to commit to theater in a big way.”

Belanoff, an actor since she was 13, said she’s excited to take courses in the concentration’s different fields, and to take advantage of Harvard’s “many excellent course offerings that are only expanding.”

“People have been pursuing theater at Harvard for so many years even though there hadn’t been a formal concentration,” said Belanoff, “so I knew that there was groundwork available to me … it’s an exciting time to be here.”

No less excited is senior David Sheynberg. Though the concentration arrived a little too late for him to declare it as his official field, the human and evolutionary biology concentrator is taking advantage of it as a secondary program.

He was thrilled when the concentration was announced. “I thought, ‘Oh my goodness, I get a full year to revel in it.’” Active on the campus scene since his freshman year, Sheynberg said his theater experience at Harvard has led him to consider pursuing a master’s in fine arts.

Last Thursday, faculty, staff, and students gathered at Farkas Hall to welcome Harvard’s 49th official concentration. It was no secret that many in the crowd had wondered if it would ever actually happen. Though there had long been strong support for the idea across the University, action stalled for years.

Even Martin Puchner, the chair of Theater, Dance & Media, was skeptical — so skeptical, in fact, that when an email confirming the funding for the concentration arrived from Harvard President Drew Faust, he thought it was a joke.

“I couldn’t believe it. People had been talking about a theater concentration for 100 years and now it was going to happen just like that?” Puchner, the Byron and Anita Wien Professor of Drama and of English and Comparative Literature, told the crowded auditorium.

Fortunately, Dean of the Arts and Humanities Diana Sorensen, like Faust a longtime supporter of the new concentration, followed up with a call to convince him it was real.

Students began taking classes this fall in the concentration, whose requirements include 11 half-courses that explore areas such as the history of theater and critical and scholarly approaches to its various genres and forms. Students will also take several practice-based courses, including labs that focus on technical aspects of theater, and participate in two department productions.

Faust thanked contributors across the University who helped bring the concentration to fruition. And many thanked her. She was key in its creation, they said; the 2008 recommendations from her Presidential Arts Task Force and the resulting Harvard University Committee on the Arts both called for an enhanced arts presence in the curriculum and backed the new concentration.

Faust acknowledged that Theater, Dance & Media was long awaited and said it will play a critical role in making the arts “an integral part of the cognitive life of the University.”

“We are here because we understand how the arts are essential to Harvard’s purposes. They enable us to create and communicate meaning and values. They challenge us to question, to broaden our expression, to deepen our understanding of ourselves and of others, of what it is to be human. And they nurture within us a willingness to engage with new ideas and new people … to take risks. They nurture a kind of curiosity and openness that is at the heart of everything that we seek to do.”

The concentration will extend to collaborations between students and campus arts organizations such as the A.R.T.

Diane Paulus, the A.R.T.’s artistic director, who first arrived at Harvard more than 20 years ago as an undergraduate, called the Farkas event a “pinch-me moment.” She said she came to Cambridge in her teens planning to be a politician or a lawyer so she could help make lasting change. But her days spent shaping plays in the basement of Cabot House and haunting the halls of the A.R.T. convinced her she could change the world with her art instead. She hopes the new concentration will inspire students to the same mind-set.

“I believe the new concentration will produce the next generation of artists, who, I know, will make a significant contribution to how we understand and interpret the complexities and challenges of life in the 21st century,” said Paulus. “And I know that these students will also go on, taking the skills that they’ve learned in this concentration … collaboration, risk-taking, imagination, creative problem-solving, and they will not only become leaders in the arts, but also leaders in political spheres, in journalism, in the business world, in the realm of social justice. They will be the leaders who will take empathy and understanding of the human experience into our lives and teach us about what it means to be citizens alive today.”

Sophomore Eliza Mantz, who wasted no time declaring the concentration when the opportunity came, hopes to inspire from the stage.

“What has kept all of us going has been how great the extracurricular theater community is here and the breadth of classes that already exist,” said Mantz. “The transition into the concentration is essentially seamless for us because we already have so many wonderful opportunities available.”

She is certain her studies will help make her dreams a reality.

“Since I was a little girl I have been fully on track to be an actor and I am so excited that I can now make that my college experience, one focused on helping me get there.”