Faust: Step up on climate change 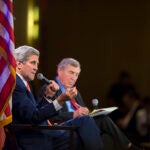 Facing ‘the challenge of our generation’

WASHINGTON, D.C. — Speaking at a State Department forum on Tuesday, Harvard President Drew Faust said that universities can and must play a key role in developing solutions to climate change, citing the research, teaching, and convening strengths of research institutions.

Opening the two-day Climate and Clean Energy Investment Forum, Secretary of State John Kerry called confronting climate change “perhaps the defining issue of our generation,” setting the stage for a series of discussions among investors, corporations, philanthropies, universities, and policymakers only weeks before the United Nations Conference on Climate Change, which kicks off in Paris on Nov. 30.

Faust set out some important ways in which universities will contribute to efforts to deal with climate change, as part of a panel on “Innovative Models for Climate Solutions.” Citing research efforts to develop new and more-efficient batteries and to convert solar energy into hydrogen with help from a bionic leaf, she highlighted a focus on discovery.

“Universities contribute an extraordinary depth and breadth of expertise, a commitment to driving discovery and innovation, and a conviction that the world can be changed by ideas and discoveries,” said Faust.

As conveners and collaborators, said Faust, universities also bring people together and spawn new ideas on the issue, “across national borders, across disciplines, and across generations.”

She also reinforced the central role of universities as educators, “preparing new generations of leaders to ask and answer the big questions, better equipped to grapple with the complex disruption of climate change, and a world more interdependent than ever before as we seek solutions.”

At Harvard, 243 courses are offered on energy, sustainability, or the environment.

Harvard’s president appeared on the panel a week after the announcement of a new, multiyear, $3.75 million grant to support research efforts on climate change and China’s issues with it. Harvard also launched the University-wide Climate Change Solutions Fund in 2014, and in January 2015 issued its first seven awards.

Throughout her remarks, Faust noted the complexity of the issue, and the importance of a multifaceted approach to tackling it.

“Universities, perhaps more than any other institutions, have the remarkable power to convene individuals and institutions around issues that transcend boundaries — boundaries that have shaped, and in some ways limited, our ways of thinking,” she said. “Climate change is a business issue, a policy issue, and a public health issue. It is a challenge for engineers and scientists, innovators and investors, for architects, designers, economists, and historians. It is vast and consequential — and, in its stunning diversity, demands our best effort to work together in new ways.”

Pfund and Beschloss noted the importance of anticipating and planning for the effects of climate change, especially among investors and businesses. Prickett highlighted the role of nature itself as a solution to climate change.

The climate-change discussion was the culmination of Faust’s two-day trip to Washington, where she met congressional and administration leaders to advocate for increases in federal research funding.

Amid budget debates in Washington, Harvard has made the case that federal funding for basic research has stagnated over the past decade, even as investments in science are widely recognized as a major driver of long-term economic growth.

While in the capital, Faust also participated in a discussion on trends and the future of the humanities at the American Association of Universities. She joined William “Bro” Adams, chairman of the National Endowment for the Humanities, on the panel.