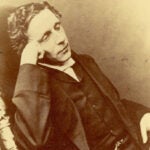 Down the rabbit hole at Houghton

Vijay Iyer keeps his ear to the moment

Surgeon Terry Buchmiller and windsurfer Gonzalo Giribet have also been featured in Practice, a series of profiles zeroing in on the makings of performance.

The paradox comes in handy on the road. On tour with his trio, in an unfamiliar city, after a long flight, operating on two hours of sleep and about to go onstage, “You can’t really rely on the mind,” said Iyer, a pianist and composer and the Franklin D. and Florence Rosenblatt Professor of the Arts.

“At that point, there’s another kind of thing that takes over that I find is actually more important in making music, which is being vulnerable to the moment and the forces that might be surrounding you at that moment.”

The art of Iyer

The Vijay Iyer Trio performed at Holden Chapel in April.

Iyer, whose résumé includes a 2013 MacArthur Fellowship, describes the precepts behind his playing in a deep, measured voice. Be open to the moment. Hear what others don’t. Listen to learn.

“I work hard on music, but I also find that at some point it’s not about excellence or perfection or being great, it’s just about being connected.” Tapping into that connection, he added, is “about revealing yourself, about staying tuned in to what’s happening.”

That deep understanding of the nature of a song, as well as a sense of where your band-mates might choose to take it and how to follow them, requires an equally deep work ethic. As for any serious-minded musician, the building blocks for a jazz player are rigorous study of the canon, patient and thorough repetition, and a highly focused, highly trained ear.

For Iyer, 43, staying connected to the music means, above all, listening. It’s something he tries to impart to his students, and a skill he developed in himself by roaming the history of the genre. Growing up in Fairport, N.Y., he spent his afternoons with records, listening endlessly to John Coltrane, Miles Davis, Duke Ellington, Herbie Hancock, Thelonious Monk, and others.

“I’ve always played the piano as a listener, that’s how it started for me. It started with the ear.”

He was 3. On one hand were formal violin lessons, on the other an informal urge to bang on the piano “to just make some noise.” Both his drilling for the violin and his “slow, trial-and-error, exploratory” process with the keyboard drove his development. Still, devoting so much time to lessons could sometimes be isolating. Joining the school orchestra, in fifth grade, proved transformational.

“I realized music is also social. That it’s not just this solitary, lonely and kind of neurotic pursuit. That it’s actually something you do in relation to, with, among, and for others. That sort of reactivated my interest in it and saved it for me.”

Iyer practiced the violin by the book. When he wanted to experiment, he turned to the piano. In high school, he took a handful of classes with a jazz piano instructor who helped him “hear things at a higher level,” like the extensions of chords and the importance of “being fluid” with the music, the jumping-off point for inventing and improvising. For the most part, though, he figured it out alone: “Things just sort of developed by doing.”

The mind of a polymath veers easily. For a time, Iyer seemed destined for a life in research. He studied math and physics at Yale and then followed his interest in the latter to the University of California, Berkeley, where he earned instead a Ph.D. in the cognitive science of music. But he never stepped away from the piano, and in the end, the decision to devote his life to composing, playing, and teaching was an easy one.

“What helped initiate that transformation was that realization that I didn’t love physics and I actually loved music. There’s no other word for it, because it was really a matter of the heart. I don’t know what else to say, other than that’s why I’m here.”

Right now, “here” is Harvard, where Iyer is working to instill in students his commitment to both old-fashioned practice and in-the-moment experiments in form. And, above all, stressing the primacy of simple (or not so simple) listening.

His own talent for listening became more crucial and more exciting when Iyer began playing with other musicians and with the music itself, deepening his improvisational skills. But what exactly does the practice of reacting spontaneously to other players and changing up time signatures, melodies, or harmonies on the fly involve?

“Part of improvising is knowing how to recover from when things sort of get beyond what you hoped, or when something acquires a certain energy that you didn’t foresee and then you have to respond to that energy. That’s what you’re preparing for all that time, being able to choose as the need arises.”

Such preparation takes countless hours of playing, to master a work so completely that it becomes second nature. “You just live with the music long enough that it ceases to be an issue.” For Iyer, conquering a complex, polyrhythmic piece, for example, means internalizing its multiple beats. “You have to be able produce all of them simultaneously, tapping out one rhythm on the table while singing the other.”

Once it’s internalized, he said, it’s a question of where else you can take it.

“I practice being spontaneous, which is to say it’s not just about playing the details of the song, it’s about playing with them.”

In sessions with his trio when he first moved to New York several years ago, “We really would just sit on one rhythm of a piece, just observing it as we cycled through it,” Iyer said. “It was about just trying to make yourself execute it to the point where it’s fluid, but it was also partly about noticing what it’s possible to do with it.”

Sitting on a rhythm

Vijay Iyer remembers practicing with bandmates in his New York apartment, where they would often work on a single rhythm for hours.

Iyer reaches for the art of the possible when composing, as well — challenging himself to create something he “can’t immediately play.” As an example he offered up Coltrane’s “Giant Steps,” which is built around a rapid series of tricky chord changes that make it awkward to perform and give it an atonal sound. Coltrane himself struggled with the piece, never truly satisfied with his recordings of it. But his frustration, said Iyer, proved transcendent.

“It led to a transformation in his playing that you can then hear for the rest of his life in all of his recordings.”

That spirit of inventiveness is at the heart of Iyer’s advice to musicians and composers, young and old: “Be creating from the first moment.”