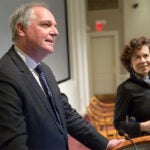 Making sustainability part of the business

There is hope in global action to fight climate change, in the slow adoption of wind and solar power, in moves by the U.S. government to cut emissions from vehicles and power plants, in the lead taken by some businesses to clean up operations and draw attention to the problem.

But it’s too late to avoid several more degrees of warming by the turn of the next century, too late to completely stave off dramatic melting, and too late to avoid the slow swamping of Pacific island nations, whose thousands of years of history and culture seem certain to be swallowed by rising seas.

A panel of experts in science, politics, business, economics, and history shared their views of the massive challenges presented by climate change Monday in a talk at Sanders Theatre that was by turns hopeful and gloomy.

Worries about political intransigence, massive energy-system inertia, and an active campaign to sow doubt that the problem even exists sparred for 90 minutes with heartened references to clean-energy innovation, an increasing acceptance that adaptation and mitigation are wise, and, perhaps most importantly, the passion exhibited by tomorrow’s leaders, who today fill classrooms at Harvard and other colleges and universities.

“The challenge of climate change is profound. The risks it poses are dire. Confronting those dangers is among the paramount tasks of our time,” Harvard President Drew Faust said in introducing the discussion. “We owe it to one another and to future generations to meet the challenge with the intensity, the creativity, and the cooperative effort that the situation demands. … Universities have a crucial role to play: We act through our research, our educational programs, our embrace of sustainability on our campus, our engagement with the wider world.”

The Obama administration has worked through congressional gridlock to take several meaningful steps to address the problem, Holdren said. U.S. greenhouse-gas emissions, he said, have decreased 10 percent since 2005. The recent agreement with China on greenhouse-gas reductions, seen as a landmark because it included commitments from the world’s two largest emitters, would see emissions fall further, to between 26 and 28 percent by 2025.

Panelists acknowledged that greenhouse gases already emitted and expected to be released, even under optimistic scenarios of a clean-energy transition, are enough to affect climate. Their effects, Schrag said, will be felt for thousands of years. He said we are perilously close to the threshold for irreversible melting of the Greenland and West Antarctica ice sheets. Their collapse, occurring over centuries, would irreversibly raise sea level, inundating coastal cities and swamping low-lying Pacific islands.

“I don’t think people understand the momentum in this system,” Schrag said. “We are deeply addicted to fossil fuels in all sectors of the economy and moving too slow.”

Aldy said that political inaction may be due to politicians being asked to make potentially painful moves without a clear return in sight. That problem is exacerbated, he said, by the fact that action on climate change provides a global rather than a local benefit, which gives nations a reason to wait to see what others are doing before acting themselves.

Though some business leaders have embraced the challenge, many remain unconvinced by the threat of warming, Henderson said. For that community, she said, it would be helpful to move away from the all-too-often-used tactic of framing the issue as a “religious war,” and instead present it as a way of managing risk. Were more businesses to see the problem as presenting a level of risk to operations, they would be likelier to take steps against it.

Getting the message across to the public presents a communication challenge to scientists who are used to being able to make their cases by presenting facts, Oreskes said. Because of efforts to create doubt that the problem exists ― financed by fossil-fuel interests — and a philosophical concern that the issue is being used to grow government, a different kind of conversation is needed, she said.

Co-panelists responded by saying they didn’t think that vilifying fossil fuel companies, on whose products we still depend every day, would make a difference. Newell questioned the effectiveness of divestment as a strategy, saying it polarizes the issue at a time when what’s needed is to bring people to the middle. Perhaps more helpful, Aldy said, would be for students to work for action in their home states, particularly those whose governors have said they’ll fight the Obama administration’s proposed reduction of emissions from power plants.

The panel is just the latest Harvard action on climate change. In a March speech at China’s Tsinghua University, Faust addressed the roles universities play in the search for climate solutions, both in faculty members’ research and in training the next generation of scientists, policymakers, and business leaders. The president’s office also recently announced the first grants from the Climate Change Solutions Fund.

The panel came after a series of Harvard events around Climate Week, including discussions among climate scientists, lectures by experts in various fields, and social and literary events.

In summing up the problem, Holdren said people can expect a complex web of effects, including floods, storms, and drought, whose harm will be felt for centuries to come. Though it is too late to avoid at least some warming, strong action today could have a tremendous influence on the magnitude of the effects, he said.

“This is not just a problem for future generations. Climate change is causing harm now.”