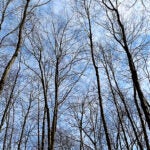 Taking to the woods

Seven research projects aimed at confronting the challenge of climate change using the levers of law, policy, and economics, as well as public health and science, have been awarded grants in the inaugural year of President Drew Faust’s Climate Change Solutions Fund.

“Climate change poses a serious threat to the future of our planet,” Faust said. “Universities have a critical role to play in generating innovations that will lead the transition to clean, affordable, and renewable energy sources, and Harvard is committed to advancing such efforts as we continue to serve as a model of sustainability for institutions around the world.”

Last year, Faust announced the creation of the $20 million Climate Change Solutions Fund in order to hasten the transition from carbon-based energy systems to those that rely on renewable energy sources, and to propel innovations needed to accelerate progress toward cleaner energy and a greener world. The inaugural round of awardees reflects the University’s longstanding commitment to supporting collaborative solutions to the climate challenge across a wide range of disciplines.

“Harvard has the capacity and responsibility to address the challenge of climate change boldly and with conviction,” said Vice Provost for Research Richard McCullough, whose office administers the fund. “Shaping a more sustainable future, both on and off our campus, will depend on the insights of our scientists and engineers, as well as our experts across a wide range of disciplines from public policy, law, business, economics, and health.”

The seven winners and their projects are:

As a result of rapid economic growth, India’s greenhouse-gas emissions now rank third in the world, and the country is increasingly seen as an integral player in upcoming discussions for a global pact on climate change. A collaborative research project in three Indian states led by Professor Rohini Pande and colleagues at the University of Chicago and Yale University is laying the foundation for improved monitoring and the possibility of tradable markets for particulate matter emissions from the industrial sector, which can have key climate co-benefits.

For her project, Pande, the Mohammed Kamal Professor of Public Policy and co-director of the Evidence for Policy Design Initiative at the Kennedy School, is partnering with central and state government environmental regulators to provide “proof of concept” for continuous emissions monitoring of industrial plants that would provide the baseline data necessary for the design of a market for emissions trading of climate pollutants. The key, she says, is to confront the problem at the local level.

“Countries where growth is an important objective care about the impact of local air pollution on public health,” Pande explained. “The productivity losses and associated impact on the economy can be very high if countries like India are not accounting for pollution.”

Pande’s research builds on the success of a pilot project in the state of Gujarat, where her team collaborated with regulators to rigorously evaluate the benefits of changing the system for emissions auditing by having auditors randomly assigned to industrial plants by regulators, rather than directly hired and paid by the firms on which they report. The reform resulted in more accurate data being collected and an eventual reduction in pollution from smokestacks.

In addition to Pande’s research in India, the Fund will support an ongoing research program led by Professor Michael McElroy to partner with China, the world’s second-largest emitter of carbon emissions, in developing a low-carbon energy policy. The award will strengthen work across four Schools to investigate options for renewable energy, reducing carbon emissions, and reducing air pollution to improve public health.

Jisung Park, a Ph.D. candidate in economics in the Graduate School of Arts and Sciences, will use his award to deepen the understanding of how climate-related weather events impact economic growth on a local and regional level in the United States. He plans to build an economic model that can evaluate the social and economic impact of short-term weather events versus long-term climatic shifts. Park’s research could have broader implications for policymakers assessing adaptation measures for and risk related to climate-related events.

The development of simple, scalable clean-energy resources for a rapidly increasing world population is a problem Professor Daniel Nocera is addressing by building upon the discovery of the artificial leaf with a plan for low-cost and scalable methods of production. Nocera’s goal is to bring this technology to the developing world and move from centralized production of electricity to a distributed model that provides people with the power to create their own energy.

Professor James Stock will use his award to achieve a better understanding of market failures that are hindering the expansion of first-generation biofuels within the United States. Stock plans to identify barriers to the adoptions of ethanol biofuels, those fuels produced from the sugars found in grains such as corn and sorghum, by assembling and analyzing a unique data set of Minnesota gas stations and flex-fuel vehicles to inform his work.

Forty percent of food produced in the United States goes uneaten, according to Emily Broad Leib, the director of Harvard Law School’s Food Law and Policy Clinic (FLPC). Broad Leib and her team will use their award to continue addressing the global problem of food waste. The HLS team is identifying key legal and policy levers to reduce the emissions associated with food waste by investigating, amending, and enacting new polices ― such as tax incentives and liability protection ― that remove the barriers to food donation. They will also continue to raise awareness of the billions of pounds of food wasted because of confusion from misleading food expiration-date labeling, an issue first brought to light in a 2013 report FLPC released with the Natural Resources Defense Council.

“I’m thrilled that through this support we will have the opportunity to expand our work looking at creative ways that we can use law and policy changes to significantly reduce food waste and its harmful environmental impacts, while at the same time increasing food donations and improving food access,” Broad Leib said.

T.H. Chan School of Public Health research fellow Jose Guillermo Cedeno Laurent will study the effects of extreme temperature events on human health, focusing on the elderly and the University’s student population. The project’s use of Harvard’s campus as a “living laboratory” to test research and apply it to on-campus challenges was particularly attractive to the committee.

Cedeno Laurent hypothesizes that the impact of extreme heat waves on physical activity and cognitive function can be mediated by sleep quality. Through the support of the Fund he hopes to identify adaptation opportunities that provide thermal comfort at night for occupants during heat waves and also result in more efficient energy use within residential settings. The research is being conducted within the undergraduate Houses and in partnership with Cambridge Housing.

Harvard continues to build on its well-established climate-related research and teaching initiatives. In 2014, the Harvard University Center for the Environment announced a new secondary field in energy and environment, and the Harvard Graduate School of Design launched the Center for Green Buildings and Cities to drive the development of higher-performance buildings and new design strategies for sustainable building and planning.

In addition to academics, Harvard maintains a strong commitment to institutional sustainability. In 2008, President Faust established an aggressive science-based greenhouse-gas reduction goal and in 2014 the Office for Sustainability launched a holistic Sustainability Plan to align Harvard’s Schools around a common roadmap for building and operating a healthier, more sustainable campus.

Proposals to receive support from the Climate Change Solutions Fund will be solicited again later this year and may be submitted by Harvard faculty and students with Harvard faculty mentors via the Fund website.