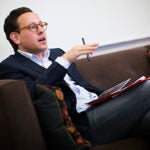 Rothko murals, ‘restored’ by digital lighting, are focus of two days of discussions

Time hasn’t always been kind to Mark Rothko’s Harvard murals. Painted in 1962 and installed in 1964 at the Holyoke Center (now the Smith Campus Center), the murals were exposed to high levels of natural light, which prompted the colors to fade significantly and unevenly. It didn’t help that some of the pigments in Rothko’s self-mixed paints were (unbeknownst to him) prone to fading.

By the 1970s, the damage was all too evident, and the works were stored away. It wasn’t until recently that Harvard’s conservation scientists and curators, with the help of experts from the Massachusetts Institute of Technology and the University of Basel, began developing a method to restore the works’ original hues, using an experimental digital light-projection system.

Today, the murals are not only a popular draw at the newly reopened Harvard Art Museums, they were recently the focus of two days of Rothko-centered programming for scholars, students, and the public. A keynote address on March 12 featured a conversation about the murals between contemporary American artist Terry Winters and Carol Mancusi-Ungaro, director of the museums’ Center for the Technical Study of Modern Art.

The events highlighted both the Harvard murals’ return to public discourse and their role as models for a new method of treating damaged art. The introduction of light-based technology in conservation is the primary proposition behind the special exhibition, which raises complex questions.

“What happens when great works of art change with time?” asked Mary Schneider Enriquez, the museums’ Houghton Associate Curator of Modern and Contemporary Art, as she introduced the keynote address. “What are the right steps to take to preserve, care for, and allow a work of art to be what it should be, based on what the artist wants, and based on history? The Harvard murals give us a way to think about that.”

The passage of time — and our comfort (and discomfort) with its effects — was prominent in many of the discussions. As some participants observed, the light projection applied to Rothko’s canvases has essentially created two versions of the mural series: the color-corrected works that transport viewers back to the 1960s, and the non-lit “originals,” bearing all the damage and muted hues from the past, which make an appearance each day when the projectors are shut off at 4 p.m. (This event, incidentally, often draws large crowds.) Comparisons of the two versions, and assessments of their respective authenticity and validity, emerged frequently at the events, a testament to the exhibition’s effectiveness in prompting debate.

Winters surprised himself, as well as many at his lecture, when he admitted that his initial preference was for the unrestored version of the murals — despite his admiration of their conservation.

“I was kind of shocked, actually, that once the lights went off, I felt as if Rothko had entered the room,” Winters said. “Somehow, the transformation just revealed another aspect of the paintings, and of Rothko’s presence. …  I was happy seeing the restored paintings … but [the unrestored murals] give another feeling, which I found very moving: the loss of color, the loss of time.”

Conservators who worked on the project noted that they had created the light-projection system in keeping with what they believed approximated the artist’s original ideas. Restoring the original colors was deemed critical because Rothko wanted all five panels to be viewed as a whole.

The discussions called into question whether any conservation approach should change an object’s appearance, particularly when that object shows signs of age or loss. “Perhaps,” Mancusi-Ungaro observed at the end of the study day, “there is no one state for a work of art.”

Christopher Rothko said that he could appreciate the murals both before and after the restoration, and his sister agreed. However, she added that the murals’ prematurely aged appearance would be unacceptable to their father. Prizel also said she believes the sort of digital augmentation that was applied to the murals will soon become more acceptable and commonplace in the art world. Already, many contemporary artists, including Lucas Blalock and Matt Saunders, who were other speakers at the study day, are embracing digital means to explore questions of originality and materiality.

Even though he doesn’t fully embrace the conservation method applied to the Harvard murals, speaker Jeffrey Weiss, a senior curator at the Guggenheim Museum in New York, called the project “world-historical” and a crossroads for the field. “We need to be able to understand [the new technology] and engage with it in a critical way,” he said.

With Harvard at the forefront of this continued exploration, it seems time is finally on the murals’ side.