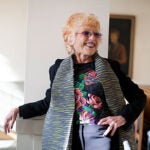 A century ago this July, construction began on a new building for Harvard’s Germanic Museum. It was to be housed in Adolphus Busch Hall, named after the main donor, a St. Louis beer baron.

In one way, the museum’s venue on Kirkland Street arrived at a good time. Since 1903, its collection of monumental plaster casts — then America’s most impressive representations of medieval sculpture from northern and central Europe — had languished in cramped Rogers Hall, a former gymnasium.

In another way, it came at a very bad time. Less than a month after construction started, so did World War I, sending a tsunami of anti-German sentiment across America. Busch Hall was finished in 1917, and the casts were moved in. But the Germanic Museum’s new venue did not officially open until 1921, purportedly delayed by a lack of coal. (“The odium that attaches to it will, of course, wear off in time,” the Crimson wrote of the new museum.) For the next decade, it remained a sleepy destination compared with the ascendant Fogg Museum, which in 1927 moved to grand new space on Quincy Street.

The Germanic — closed again during World War II and renamed the Busch-Reisinger in 1950 — was the subject of a recent daylong discussion of the museum’s identity by way of its history. This “study day,” the third in three years, was intended to mine the past now that the future is so close. By the end of this year, all three of Harvard’s art museums (the Fogg, the Busch-Reisinger, and the Arthur M. Sackler) will share space at 32 Quincy St., dramatically renovated under the direction of the celebrated Italian architect Renzo Piano.

“We are at a tremendous moment” as the museums get ready to occupy a common space for the first time, said study-day speaker Joseph Koerner, the author of several books on German art and the Victor S. Thomas Professor of the History of Art and Architecture. He foresaw the sky-lit museum, more accessible than ever, as “a thoroughfare, a piazza, an agora. … It will be possible to see the history of art as not a series of enclaves but as a river.”

“This study day comes at an appropriate moment,” said Thomas W. Lentz, A.M. ’81, Ph.D. ’85, the Elizabeth and John Moors Cabot Director of the Harvard Art Museums. He introduced the official program, which will include seven lectures followed by discussions, on Feb. 28.

“We actively embrace our three separate identities,” Lentz said. “Like a kind of multi-armed Hindu goddess, these three museums … actually give us special abilities and capacities.”

The refurbished museums will invite creative dialogue and provide greater access to Harvard collections, he said, as well as encourage continual examination of important issues, including the “evolving nature of the museum identity, the renegotiation with the past, [and] the fundamental nature of the art museum, whether it’s civic, academic, or private.”

Discussions also will center on “possible futures for the Busch-Reisinger,” said Lentz, “an institution with an unusually complex history.”

That complexity was evident to the study-day audience in Busch Hall. All around was monumental statuary. Behind each speaker loomed the hall’s dramatic replica of the 13th-century Golden Portal from the Church of Our Lady in Freiberg, Germany. The reproduction of the gorgeous medieval art carried a hint of the fateful grandiosity that underlay some 20th-century misinterpretations of the Germanic spirit. Jeffrey F. Hamburger, a study-day lecturer, called such invocations of the medieval past “ideological fantasies.”

Hamburger is Harvard’s Kuno Francke Professor of German Art and Culture. His title honors the man credited with conceiving, founding, and directing the Germanic Museum in its earliest years, as a means of introducing America to German culture. After all, said the famed philosopher William James at the 1903 dedication, Harvard, “like most American universities, is Teutomaniac,” owing its ideals of scholarship to German rather than “French or English models.”

As for any “ideological fantasies” such as those promoted by Nazi Germany, to the close observer the hall itself offers a sly counterpoint. In the foyer are frescos painted by Lewis W. Rubenstein between 1935 and 1937. They depict scenes from old legends, including the “Song of the Nibelungs” from medieval Germania. The intent was to parody Nazi Germany, as the artist admitted decades later (and as was seen, but ignored, by Harvard in the 1930s). In one panel, a horn-helmeted dwarf, a stand-in for Hitler, lashes a whip at cowering slaves.

The Rubenstein murals were among the first modern artworks acquired by the Germanic Museum, a swing away from a focus on the medieval, said study-day organizer Lynette Roth, the Daimler-Benz Associate Curator of the Busch-Reisinger Museum. Today, she added, the virtual public face of the museum is Max Beckmann’s “Self Portrait in Tuxedo” (1927), which in 1937 was removed from Germany’s Berlin National Gallery by the Nazis as “degenerate art” and sold abroad. (It was purchased by Harvard in 1941, the Germanic’s last acquisition before the World War II.)

Behind much of this pivot toward modern art was then-Germanic Museum curator Charles L. Kuhn, according to his daughter, Sally J. Kuhn, Radcliffe ’59. (The elder Kuhn was at the helm from 1930 to 1968; during World War II was part of the “Monuments Men” unit that rescued art stolen by the Nazis; and after the war initiated the museum’s name change.) During the 1930s, he enlisted Rubenstein to do the murals and negotiated the purchase of Beckmann’s iconic self-portrait, along with other works deaccessioned by the Nazis. “Curators can make things happen,” wrote Sally Kuhn in an email, “and students should know this.”

By the 1930s, the museum had become “a place of exile from Germany,” said Koerner, “a cosmopolitan Germany [instead of] a Germany of nativism, blood, and soil.”

Roth said that Beckmann’s austere painting illustrates the museum’s tortuous history, as well as its struggles with identity over time. She pointed out an earlier work that represented the more imperial sense the museum once had: a 1908 portrait of a sneering, militant Kaiser Wilhelm II by Arthur Kampf, who later became a Nazi functionary. This donation from Hugo Reisinger was the first painting acquired by the Germanic. The museum still retained its teaching role, but the new portrait also explicitly invited Americans to understand German art and its imperial underpinnings.

Another study-day speaker was Megan McCarthy, an art history graduate student at Columbia University who is writing a dissertation titled “The Empire on Display: Exhibitions of Germanic Art and Design in America, 1890-1914.” The Germanic is one of her case studies, she said, and its changing identity shows that art museums are “barometers of larger cultural shifts.”

Museums are also “a means of cultural diplomacy,” said McCarthy. Study-day speaker Heidi Gearhart, the Stefan Engelhorn Curatorial Fellow at the Busch-Reisinger and an assistant professor of art history at Assumption College, agreed, calling the pre-war Germanic an example of how  museums provide “space of discourse” on a world stage. “From its earliest days,” she said, “Busch-Reisinger was a site for international exchange.”

Franke used the museum’s plaster casts as “a visual medium to supplement his classes,” according to a scholar in a 2005 study. But out of the eight German art historians who took part in academic exchanges with Harvard before World War I, said McCarthy, only one of them used the casts for teaching.

Still, Busch Hall and its remnant of the old Germanic Museum has pedagogic utility, said Hamburger. He and his classes regularly visit the hall’s plaster-cast portals, sculptures, and other artifacts. (This semester he is offering “Casts, Construction, and Commemoration: German Gothic in America and Abroad.”) “Teaching this collection opens a world of possibilities,” said Hamburger. “They have the power to make the dead come alive.”

The plaster casts, although reproductions, awaken students to the now largely mysterious “basic tenets of Christianity” required to understand art from the European Middle Ages, said Hamburger. The casts are also “a very valuable record of what these original sculptures looked like,” he added. (Many of the real ones have been blurred by a century of air pollution.) The casts also show the modern era’s “newfound interest in materiality,” said Hamburger, and provide a 3-D counterpoint to computer learning. “A collection of reproductions,” he said, “can help students understand what it means to escape the flatness of the screen.”

Hamburger is plainly enamored of cavernous and solemn Adolphus Busch Hall and its medieval resonance. Before his lecture there, he looked over the audience and said, “It’s always wonderful to see this space populated as it deserves to be.”

The venerable hall is valued for its interpretive materials, agreed Roth, and will again have public hours in the fall, once the renovated main museum is open. The Busch-Reisinger program — “completely new,” she said — will rely on both old Adolphus Busch Hall and on new 32 Quincy St. One will house those plaster casts. The other will display Harvard’s impressive collection of expressionist, Bauhaus, and contemporary art, as well as a range of work dating back to medieval times. Combined, said Roth, the result will be “enlivening and enlightening.”