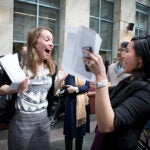 Experts from the worlds of science, government, economics, business, and history will gather in Sanders Theatre on April 13 at 4 p.m. for a wide-ranging panel discussion on how society in general and universities in particular can best confront the perils posed by climate change, Harvard President Drew Faust announced today.

The discussion, to be introduced by Faust and moderated by Charlie Rose of CBS and PBS, will bring together President Barack Obama’s principal science adviser, the co-chair of a major international climate change group, and five leading scholars prominent in seeking solutions to climate change.

“As a scientific consensus has firmly established, climate change presents one of the world’s most urgent and demanding challenges. All of us share an interest and responsibility in confronting that reality and pursuing effective solutions,” said Faust, who on March 17 delivered an address on climate change at Tsinghua University in Beijing.

“I am pleased we will have the benefit of such a distinguished group of panelists to elevate attention to the need for action and to spur us all to focus even more intently on how society and universities, in particular, can rise to the challenge,” Faust added. “We have an extraordinary range of efforts already underway across Harvard, and the magnitude and complexity of the problem demand that we do even more.”

Panelists are expected to include:

In recent years, the University has substantially broadened and deepened its research and educational programs focused on climate change and on energy and the environment. Most recently, the University announced the first recipients of grants from the President’s Climate Change Solutions Fund, intended to catalyze a new generation of efforts to accelerate the transition to renewable sources of energy.

Last year, Harvard created a secondary field in energy and environment for undergraduates and launched the Center for Green Buildings and Cities at the Harvard Graduate School of Design. Across Harvard’s 13 Schools there are 239 faculty conducting research related to climate, energy, and the environment, and 243 courses are offered to students covering the topics of energy, the environment, or sustainability.

Showcasing such efforts in scholarship and thinking related to climate change, the Harvard University Center for the Environment will host a series of events during the week of April 6–10.

Please click here to request a ticket for the event.