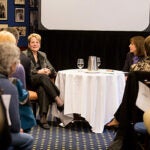 Three things make us human. We gaze at one another in a visual world, we inhabit mortal bodies, and we cope with feelings.

Philosophers grapple with the implications of these basic facts, including the special feeling that allows us to experience emotional synchronicity with others. In turn, these basics have acquired formal names for purposes of study: visibility, embodiment, and empathy.

On Friday and Saturday, philosophers and others will grapple with these durable issues during a symposium named for them. The organizer, Volkswagen Foundation Fellow Thiemo Breyer, who is just finishing a year at Harvard, is trained as a philosopher. At the University of Cologne in Germany, he is a professor of the “transformation of knowledge” and directs an interdisciplinary research team investigating the history of ideas, concepts of knowledge, and knowledge transfer.

But for the symposium, which is funded by the foundation and supported by the Mahindra Humanities Center at Harvard, Breyer went beyond philosophy to pull in experts from other disciplines, including history, psychology, anthropology, political science, and media studies. “It’s a first,” he said of the eclectic gathering.

In the past few decades, embodiment — “the body as a medium of expressing our intentionality,” said Breyer — has been a particular concern to philosophers. Visibility and empathy, meanwhile, have been treated separately from conceptions of the body, and by a wider mix of experts. (Brain scientists, for instance, are busy looking for the neurological centers where empathy resides.)

During about a dozen formal presentations, the symposium will bring all three concepts together in a framework of “fruitful inter-disciplinarity,” said Breyer. The 15 presenters are from across the United States, as well as Slovenia, Germany, Israel, and Britain. Homi K. Bhabha, an India-born scholar of post-colonial literature and director of the Mahindra Center, will provide the introduction.

“These concepts are very theoretical concepts, but they have to do with everyday experiences,” said Breyer. They traditionally have been moral investigations, but the naturalistic disciplines have a place, too. “To illustrate them, you need the empirical sciences,” he said.

The goal is to take the ideas and give them a practical edge. “Concepts don’t float about in an eternal heaven of ideas,” said Breyer, who imagines that one day even policy recommendations could come out of studying the issues behind seeing, being seen, speaking through bodily gestures, and cultivating empathy. “Concepts are practical entities, not theoretical entities.”

Yet for many centuries, a concept such as embodiment did seem afloat in that heaven of ideas. “From Plato onwards, [the body] was seen as a prison of the soul,” said Breyer, and the role of the philosopher was “to overcome the boundedness of the intellect to the senses.”

By the 17th century, philosopher René Descartes still hewed to the same dichotomy of body and soul. It wasn’t until the last century that phenomenology and pragmatism “attempted to bring the two together again,” said Breyer.

In the 21st century, except for the mind-centered domains of moral philosophy and ethics, many philosophers embrace “a naturalization of consciousness,” he said, looking for union with the sciences. “It’s more of a gradual model, where the mind is not a different kind of substance, but something that emerges out of the natural order.”

Entwined with the concept of embodiment is that of visibility, or what Breyer called in a forthcoming essay in his volume “Normativity in Perception” (Palgrave Macmillan) “an essential characteristic of being human.”

Central to that is the concept of the gaze. This glimpse linking one human to another can be welcoming, but also shaming, and dismissive. It can imply violence. It can be a tool of empathy, or the means to deny it. In part, the symposium will attempt to “discuss and systematize different types of social gazes,” he said.

Philosopher Lauren Freeman of the University of Louisville will look at visibility and racial oppression. Breyer mentioned a favorite novel exploring the same theme of social invisibility, “Invisible Man” by Ralph Ellison. “He beautifully describes the gaze,” he said, “as a means of letting people know they are not there for us.”

Developmental psychologist Henrike Moll of the University of Southern California, an expert on youthful perception, will examine the power of the gaze among children in “Seeing Each Other.” To Breyer, “the implications of the gaze” begin early, and are vital in forming healthy humans. “Being able to follow the gaze of another is a huge step in cognitive development,” he said. For infants, it is the first exercise in empathy.

Media anthropologists Martin Zillinger and Anja Dreschke, both scholars in Germany, will look at the gaze and visibility as they are mediated through technology. They are experts in how cameras and smartphones, used to film rituals and distribute them, are altering traditional experiences of the sacred.

With filmed ritual, the results generally create a social good. But “we should pay attention to these embodied forms of empathy mediated by smartphone,” said Breyer. He speculated that such devices increase social distance and could mute the power of the gaze. Reducing the number of face-to-face encounters between humans is “potentially dangerous,” Breyer cautioned, since it is already a struggle for people to hold onto empathy.

Leading off the symposium with him on Friday will be Slovenian psychiatrist Borut Skodlar, once a colleague at the Center for Subjectivity Research in Copenhagen. “Exchanging gazes is a preverbal way to let others know what we think of them,” said Breyer. But Skodlar will introduce the idea that to those suffering from certain mental illnesses, including depression and schizophrenia, the gaze can be threatening.

Within this idea is another that evolved while Breyer was at Harvard: that visibility and embodiment can express the potential for violence, that the gaze may be a portal for social and even physical mayhem. He has followed the Mahindra Center’s Mellon Fellowship program on violence and nonviolence this year, and delivered the first paper in a biweekly series of seminars.

“That changed my whole project,” said Breyer, and inspired two scholarly articles on bringing violence into the discourse on embodied empathy.