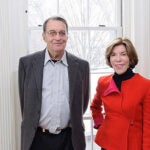 A different kind of drug research

The digital revolution has made fluency with numbers and science as essential in many fields as mastery of written and spoken language. Virtually every industry, from technology and health care to finance and entertainment, needs people with skills in areas such as statistics and computer science to fill the growing demand.

So why are women and girls often not in the equation, with only a small percentage pursuing career paths that require an education based in science, technology, engineering, and math (STEM)?

As part of Harvard Graduate School of Education’s (HGSE) yearlong focus on diversity, experts from computer science, engineering, and education gathered to discuss why the underrepresentation of women and girls, as well as African-Americans and Latinos, is so common. The participants also identified the barriers that often stop more women and girls from entering STEM fields, and offered ways to overcome them so women have the same access to career paths as men.

During Tuesday evening’s Askwith Forum, moderator Karen Brennan, an assistant professor at HGSE, asked why this gender disparity, which has existed for close to two decades, is suddenly getting attention from the business world and the media.

“One, there’s a huge demand. Two, we don’t graduate enough recipients of computer science degrees to meet that demand. And three, there’s a cap on the number of immigration visas that are available,” said Maria Klawe, a mathematician and president of Harvey Mudd College, an engineering school in California. Klawe is a former dean of engineering and professor of computer science (CS) at Princeton University.

“And so the tech industry and others who want to employ computer science grads have suddenly realized that if we had as large a percentage of female college grads … and African-American and Hispanic college students graduating with CS degrees as white and Asian males do, they would meet that demand,” she said.

Also contributing to the new focus, Klawe said, is that industry executives have begun to recognize that there are “incredible career opportunities” available to those with the necessary aptitude, and they want their own daughters to be able to take advantage of them.

“It really is important that others feel that there’s an opportunity in STEM and that they see it as a viable alternative as a career,” said Stephanie Wilson ’88, a distinguished NASA astronaut and the second African-American woman in space. “I think it’s important that we have someone to pass the torch on to.”

Not only is it good for industry to have women in technology fields, it is vital for society, the speakers said.

“It matters for what’s being invented and what’s being created. I think in today’s world, computer science especially is affecting every single solitary aspect of our lives, and it’s affecting our culture, and it’s affecting democratic participation,” said Jane Margolis, Ed.D. ’90, a senior researcher at the University of California, Los Angeles (UCLA), Graduate School of Education and Information Studies, who studies gender, segregation, and socioeconomic inequality in STEM education. “It’s a civil rights issue, and it’s a democracy issue.”

While women still out-earn men in getting bachelor’s degrees in fields such as biology and chemistry, their numbers have plateaued in engineering and dropped below 20 percent in computer science since 2000. “It’s the only area of science and engineering where participation by women has declined,” said Klawe.

For African-American women, the rates have declined even further, said Kimberly Bryant, founder of Black Girls Code, an international nonprofit that encourages and supports African-American girls to take up computer programming and technology entrepreneurship.

“It blows my mind that we’ve seen our participation and our levels in the industry decrease that much when the field is growing so much,” she said.

Why are so few women going into areas like coding and computer science? Non-existent or outdated technology in classrooms, a shortage of qualified computer-science teachers (who can find better-paying work elsewhere), and the sometimes off-putting way computer science and STEM subjects more broadly are presented to young students are all factors, the panelists said.

“I think that there’s such a myth that computer science belongs to people who are geniuses and super-smart. And in this society that’s identified with white and Asian males, and people of color and females are really doubted deeply for their intelligence, commonly,” said Margolis. “People saying, ‘It’s a meritocracy and anyone can do it’ is really minimizing the unequal opportunities that a lot of people have to get the preparation to go into this field and the culture that people face every step of the way, the culture that is doubting your right to belong if you’re female or a person of color.”

Wilson said the field of engineering has begun to take a different approach to marketing itself to middle-school girls, making it more social and appealing to them, a strategy that’s started to work.

“When we talk about engineering, we’ve started in recent years talking about it in a way that lets people know that engineers help people. We solve problems, we try to bring things to society that are very helpful … much like the medical industry has promoted itself that way,” said Wilson.

“When you make computer science about creative problem-solving, when you make it social, when it’s not scary and intimidating, and when you show people who look like real human beings rather than people who’ve been stuck in a basement … coding,” more girls will be attracted to it, said Klawe. “There’s really no reason you wouldn’t teach computer science in a way that is incredibly engaging for everybody, and yet most places don’t.”

Besides schools investing more time and effort drawing girls to STEM fields, technology companies have an important role to play.

“When we don’t have women at the helm of these tech companies, then it sends a message to women all along the pipeline that, ‘This is not a place for you,’ or ‘Your opinions and your ideas are not valued here.’ And I think that’s one of the obstacles that we have to change — making sure that women are represented all along this technology pipeline, and that we see clear pathways and models for how to get more women there,” said Bryant.

Instead of allowing tech companies to skim off the already high-achieving African-American and Latino high school students, as they are trying to do now, Bryant said businesses should be helping children much earlier in their education, children who are in underperforming, low-resource schools who could be high achievers if they were given the right tools, encouragement, and instruction appropriate for their needs.

“I want companies to do the hard work,” said Bryant. “I want them to solve the hard problems because I think that’s when we’ll really make change — we’ll see real change in this country,” she said.