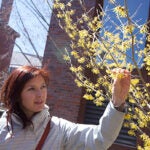 In the summer of 1948, Richard N. Frye was nearing the end of a postdoctoral fellowship in the Society of Fellows of Harvard University when he traveled to southern Iran, making his way by mule to the village of Sar Mashhad. Frye battled drought and sandstorms but, with the help of native Qashqai people, was able to climb a small cliff to collect an impression of an 800-word stone inscription written in ancient Pahlavi — one of the largest found in the Near East.

The discovery was one of many significant events during the trip. Though Frye fell severely ill from the intense heat of Buzpar, near the Persian Gulf, he also came across the only known replica of the tomb of Cyrus the Great at Pasargadae. Soon after, he traveled to Tehran, where he encountered scholars, politicians, and literati tasked with developing a modern Iran. One such scholar, linguist Ali-Akbar Dehkhoda, gave Frye the title “Irandust,” meaning “Friend of Iran.”

The professor took pride in the designation and sometimes used it as an added surname. Yet as a polyglot who was born in 1920 in Birmingham, Ala., and raised by Swedish parents in Danville, Ill., and whose scholarly career spanned six decades and half as many continents, Frye was in many ways a friend of the world.

Frye, the Aga Khan Professor of Iranian Studies Emeritus, died March 27. He left behind three sons, one daughter, and his wife, the Iranian-Assyrian scholar and Columbia University Professor Eden Naby.

Frye, who was sometimes called “dean of the world’s Iranists,” joined Harvard’s faculty in 1948, where he helped create the University’s Center for Middle Eastern Studies and in 1957 was named its first chair of Iranian Studies — a post he held until his retirement in 1990. Prior, he had earned a bachelor’s degree at the University of Illinois in 1939 and master and doctoral degrees at Harvard in 1940 and 1946. He spent a short time studying at Princeton University and the University of London, received an honorary degree from the University of Tajikistan, and held posts at Columbia, Frankfurt, Hamburg, the Hermitage Museum in Leningrad (now St. Petersburg), and Pahlavi University in Iran, where he directed the Asia Institute from 1970 to 1976. He also spent four years serving in the Secret Intelligence branch of the Coordinator of Information, the wartime agency that preceded the CIA.

“In his generation Richard Frye was a giant among scholars of Iranian studies. He spanned the entire range of Iranian studies from prehistoric times to the present day,” said Gurney Professor of Islamic History Roy Mottahedeh, who noted Frye’s participation in a variety of scholarly activities, excavations, and surveys, some of which remain standard in the field. “He was a colorful figure wearing plaid Russian shirts and carrying to seminars a sandwich in his pocket. We are unlikely to see again scholars of his breadth in the field of Iranian studies.”

Frye published more than 20 books and 150 articles, including the classic and illustrated “The Heritage of Persia” and the introductory “The Charisma of Kingship in Ancient Iran” (1964). Though his research focused on the cultural history and languages of Iran and Central Asia, it, like his travels, often crossed boundaries. In recent years, Frye wrote reflections on the distractions of modernity, on peace amid ethnic conflict and on preserving humanity and its varied cultures in what he called “the age of machines.”

“Richard Frye was one of the last, and one of the most colorful, of a number of Harvard teachers who came here just before or just after World War II and never left for long, if at all,” said Murray A. Albertson Professor of Middle Eastern Studies William Graham. “To sit in a class of his was always an adventure: He was a colorful man with many brilliant and sometimes quite quirky, but always stimulating, observations on history, religion, peoples, and places. He delighted in almost everything, from colleagues to languages — and he had a great many of both.”

Perhaps it would be fair to consider Frye home both at Harvard and in Iran, where he spoke of willing to be interred. Upon his return from that country in 1948, Frye settled into his study at Kirkland House to translate a squeeze-paper impression of his new-found Pahlavi inscription. His relationship with the Kirkland community, where he was an honorary associate, continued until his death.

“[Sprightly], witty, formidably informed, Richard Frye brought to Kirklanders — students and peers alike, tutors and members of the Senior Common Room — lucid assessments of the interactions of Islamic and Western culture,” said Master of Kirkland House Tom Conley, the Abbott Lawrence Lowell Professor of Romance Languages and Literatures and of Visual and Environmental Studies. “He had the gracious gift of drawing cultural lines of divide in pastel, never indelible ink. Richard was one of the very few persons we have known who brought intellectual delight in playing at being crusty and curmudgeonly, and all of us are the better for it.

“We dearly miss his radiant presence.”