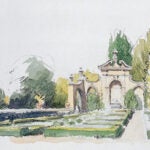 Black History Month has been on the calendar since 1976, the year of the nation’s bicentennial. But it got its start in an academic setting, at Kent State University in 1970, largely as a celebration of the historically neglected achievements of Black Americans.

Now, two Harvard graduate students, founders of a new lecture and performance series, are adding an element they say has been largely absent over the years: a look at art history from a black perspective, Africa included.

The result is Black History/Art History, a four-event series that combines traditional academic lectures (two) with nontraditional performances (two), a blend that the organizers hope will start a conversation about evolving black identity in an era of global exchange.

Among the questions are: How has Black History Month changed since 1976? How is it used in current intellectual circles? How does it account for “multiple histories”? After all, the organizers say on the event’s website, black history is white history, too, interweaving slave owners and abolitionists with Jim Crow supporters and liberals seeking civil rights. It is also European history, from the effects of colonization to present-day global exchanges that are multiracial.

Working with Bermeo in planning and executing the project is Kevin Dixon Tervala. a second-year doctoral student in the Department of African and African American Studies whose special interest is that fate of art and culture a century ago during the German colonization of what is now Tanzania. (The students’ Graduate School of Arts and Sciences‘ departments are major sponsors, along with Harvard’s Office of the Provost, the Carpenter Center for the Visual Arts, and the Hutchins Center.)

Bermeo and Tervala, who cooked up the series idea over coffee in September, hope that it becomes a February tradition at Harvard. They want to create cross-discipline conversations about the global black experience, “elastic and ever-changing.” That means reaching beyond U.S. borders. Two of the events, a lecture and a performance, are explicitly African. “We’re bringing the continent of Africa back into the picture,” said Tervala.

The two doctoral students also want to add fresh perspective. “Black history is also art history,” they wrote in an event statement. “Some of the most provocative discussions about visual representation have risen from the canvases and cameras of artists exploring black histories, identities, and experiences.”

Opening the series with a lecture last week was Deborah Willis, a New York University historian of black photography and a fellow at the Hutchins Center this semester. Her exploration of black beauty and the role of photography in constructing it was everything the inaugural event of an inaugural series should be: crowded, visual, pointed, fresh, and challenging. Willis, the author of 22 books, including the influential 1985 history “Black Photographers: 1840-1940,” led her audience at the Sackler Museum through decades of images that displayed a largely forgotten history.

“These were images never seen before” 1985, said Bermeo. “When we’re exposed to work like (Willis’s), we know it’s possible to rewrite history.”

“It’s about the elastic definition of blackness,” said Tervala of Willis. “She provides a grounding on beauty and body and skin color.” But it’s within an American context, he added, which will contrast with the next event on Thursday at the Sackler: a lecture on South African vernacular painting and photography by art historian John Peffer, author of “Art and the End of Apartheid” (2009).

The images that Willis discussed included the gracious and the striving: daguerreotypes of freed blacks on their way to Liberia; a proud washerwoman serving Union troops in 1863; and well-dressed Frederick Douglass, who Willis said cautioned black Americans that each photograph was “a biography through the lens.”

Other images were harsh evidence of cruel times: portraits of South Carolina slaves commissioned in an attempt to prove that blacks inhabited a remote and separate branch of the human tree; and lithographs of African-born slave Sarah Baartman, the “Hottentot Venus” of the early 19th century. She exhibited her full body in Europe, at one point in the employ of an animal trainer. (Later in the century, said Willis of sexualized exaggerations, Europe’s fashion response to Baartman was the bustle.)

Other images showed emerging pride in black beauty, as in black magazines and newspapers starting 100 years ago.

(In 1914, New York Age, a black newspaper, invited its female readers nationwide to submit photos in a competition to find the 15 most beautiful women.) In 1947 came the first of the “Miss Fine Brown Frame” local beauty contests. More potent and fraught reflections on beauty arose in the 1960s during the eras of civil rights and black power. “We see how communities are taking back this idea of beauty,” said Willis. But she added later, “I’m not defining beauty, but reflecting on the ways people pose beauty.”

Posing beauty is in the performance too, a kinetic component that Bermeo and Tervala want to make a regular part of the Black History/Art History event. “We’re trying to come up with new models of learning, for identity and global exchange,” said Bermeo.

The artists on hand this month expressed the same American/international divide as the lectures by Willis and Peffer did. The first performance in the series, on Feb. 13 at the Carpenter Center, was “Fairytale of the Black Mountain” by Mwangi Hutter of Berlin and Nairobi. It contained video and live art that was explicitly African, from a video group of men on a Kenyan beach to street theater recorded in South Africa to Ingrid Mwangi’s breathtaking live vocalizations and movement.

The fairy tale of race — a mash of truths and falsehoods — is “a topic we are busy with,” said Robert Hutter. “We see ourselves as artists, finding artistic solutions for situations we find in the world.”

Racial identity often relies on displacement, he added, “the experience you make when you go somewhere else.” Mwangi said, “I only became African when I moved to Germany.”

A performance scheduled for Feb. 28 will feature Shaun El C. Leonardo, a black performance artist, videographer, and illustrator whose work explores masculinity. His “One-on-Ones,” a riff on football drills that will feature Crimson players, reprises “Bull in the Ring,” a 2009 piece he did at the Los Angeles County Museum of Art.

All this live art is “to help think through blackness,” said Bermeo, but “just a series of lectures.”

Like performance art, the series is designed “to confront, challenge, and delight,” said Tervala, and to question “all identity categories,” black and white.