Art, turned on its ear 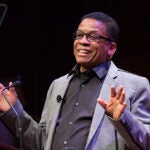 Photographer, curator, and arts scholar Deborah Willis, who normally hangs her beret at the Tisch School of the Arts at New York University, will be in residence at Harvard this semester.

Willis, the foremost U.S. historian of African-American photography, last Wednesday shared what she will explore this year as the inaugural Cohen Fellow at the Hutchins Center for African and African American Research. She’ll focus on how modern photo and video artists are revisiting iconic Western images, and recasting them with jarring depictions of races typically left out of the iconic art of ages ago.

“There is something to be said for historical returns,” said Willis, quoting art critic Okwui Enwezor, “the way past events play on our memories.”

Flashing on a screen during the lecture were a dozen or more familiar images, including Venus de Milo’s marble curves, da Vinci’s “The Last Supper” (1498), Johannes Vermeer’s “Girl with a Pearl Earring” (circa 1665), and Andrea Mantegna’s “St. Sebastian” (1480), which shows the martyred saint pierced by a thicket of fatal arrows.

But more interesting to Willis are the re-creations of these iconic images. Art photographer Awol Erizku, for instance, recast Vermeer’s famous beauty into “Girl with a Bamboo Earring,” a portrait of a black teenager from the Bronx. And, notoriously, photographer George Lois depicted Muhammad Ali in a pose like the tortured St. Sebastian for a 1968 Esquire cover, complete with arrows. (Ali had just emerged from his trial for refusing to be drafted into the military.)

“For some time now, I’ve been reconsidering history,” said Willis, “especially iconic moments in history.” This scholarly and artistic pursuit is what she called “an experience of borrowing” on the part of modern artists taking fresh looks at old art from a racial perspective.

Her noontime audience crowded into a nearly full Thompson Room, on the occasion of the first Hutchins Center colloquium of the semester. To center director Henry Louis Gates Jr., the Alphonse Fletcher University Professor and director of the W.E.B. Du Bois Institute for African and African American Research, she is “the great Deb Willis.”  To Harvard’s Robin Kelsey, the Shirley Carter Burden Professor of Photography and director of graduate studies in the History of Art and Architecture Department, she is an author so prolific that the list of her books “only seems to accelerate. The rest of us feel like we’re moving in slow motion.”

Kelsey mentioned a few Willis titles, including “Reflections in Black” (2002), a history of black photographers from 1840 onwards, and “Posing Beauty” (2009), an exploration of black images starting from the 1890s. In her work, said Kelsey, Willis focuses not on theory, but on “the individuality and the humanity of her subjects.”

This time, Willis’s subjects are those seen by an array of video artists and photographers, some of whom — as she said of Erizku and his Bronx teenager — are in pursuit of “excluded beauty.” Most of these artists are also after images that “explore a sense of desire,” said Willis, a onetime MacArthur Fellow. That can be social desire, as Singapore artist Ming Wong explored in his 2009 video installation “Life of Imitation.” (Willis played a few clips.) It’s a re-creation of the classic “Imitation of Life,” a 1959 film in which a mixed-race daughter rebuffs her black mother, along with her own racial identity. To add layers, said Willis, Wong used three actors, all men and none of them black. “It’s a witty piece,” she said.

After a short presentation, Willis opened the event to questions, so she edited down a long list of artists whose “historical returns” to old images she will explore this semester. But even a partial list reads like invitees to a party worth attending: Luis Gispert, Lorna Simpson, Kiluanji Henda, David LaChappelle, Joy Gregory, Sheila Pree Bright, Peter Lippmann, Carla Williams, and Carrie Mae Weems.

Many of the artists on her list “are not in conversation” about these visits to the past, said Willis, “but they’re all working on the same idea.”  That idea counters racial depictions excluded from most of art history. That makes these “historical returns,” she said, modern commentaries on long-ago injustices of “absence and disappearance.”

Due to adverse weather conditions, the Feb. 5 Hutchins Center colloquium has been canceled. “DNA Is Not Destiny, But What Happens When It Is?” will be rescheduled at a later date.