On the frontiers of learning 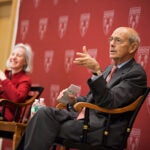 “This is the start of the golden age of education. This is as big as it gets. Never have I seen a time in my life where education has been this exciting,” said edX President Anant Agarwal. “This is a great time to be in education and a great time to make an impact.”

Agarwal, a professor of electrical engineering and computer science at the Massachusetts Institute of Technology (MIT) since 1988, delivered that bold message to a capacity house at Longfellow Hall Tuesday evening in an Askwith Forum hosted by the Harvard Graduate School of Education (HGSE) on how online education has begun to change the way that people think about learning.

Since the nonprofit partnership between Harvard and MIT launched last fall with its first course, a class on circuits that drew nearly 155,000 students, edX has grown to serve 1.4 million people who have participated in online courses offered by 29 collaborating universities around the world. HarvardX classes alone have drawn more than 500,000 registered users. Agarwal has often stated his personal goal of eventually reaching a billion students.

“Some people look at a number like a billion and see exaggeration,” said HGSE Dean James Ryan during his introduction of Agarwal. “I see it as the kind of aspiration we need to achieve universal access to education, to ensure every child and young adult around the world has the knowledge and skills necessary to lead a successful and fulfilling life.”

Already the massive open online course (MOOC) concept has transformed the way people around the globe can access education. Agarwal said it has the very real potential to do the same for the way educators think about and teach students, virtually or in person.

“Technology has absolutely changed the world, whether it’s health care, whether it’s communications, whether it’s transportation,” he said. “Everything is completely different. But education hasn’t changed.”

While standard educational modes — classrooms, lectures, textbooks, and homework — have evolved over the last 25 years ago, they have yet to catch up completely to the rapid rise of social networking and ubiquitous computing.

“The millennial generation is completely comfortable doing things online, and here we are in the classrooms fighting everything: Shut the laptop, I’m going to cut the wireless off,” Agarwal said. “Instead of fighting it, let’s embrace it and see if we can get them to learn with these new modalities and do better.”

With the dramatic swell of student participation in edX courses, and the large amount of data they generate, Agarwal said it’s now possible not only to refine edX to improve the user experience, but to tailor those refinements based on best learning practices and pedagogies as part of the platform user interface.

Since students tend to learn better when they form small study groups, he said, one possibility is to create an option for students to provide their location and then alert others in their area who are also taking a course. To identify which portions of a course are giving students the most trouble, one solution might be to review discussion forums, see what questions students are asking each other, and then put up video tutorials to address them. For students who need tutoring to complete coursework, a course could offer a button to connect instantly to a tutor service via chat or text.

The large swaths of edX data generated by student participation is being made available to researchers studying education, with the hope that by using this “big data,” researchers will be able to conduct studies that yield meaningful results about engagement and learning habits in a more timely fashion than has been historically possible, studies that don’t rely on the often flawed estimations of students. Andrew Ho heads up the HarvardX research effort that is helping to mine edX data.

Although the results aren’t in yet, Agarwal said he hopes that over time the data will help point to improved methods in teaching on campus, not just online.

As for edX competition, Agarwal said, “Fundamentally, I think this is a good thing. If it were only one person doing it, I think it wouldn’t be so exciting. The fact that there are multiple players, multiple people trying different things, different business models — for profit, nonprofit — I think it’s all a really good thing for education.

“And having many players in the mix creates more of a movement rather than a lone voice that cannot be heard.”