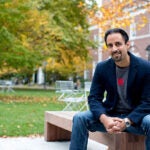 While online courses from HarvardX have reached more than half a million students globally, less than 1 percent of the participants are in China. Technology and culture may be partly to blame for the low early enrollments. YouTube and other popular social media sites are banned there. English courses offer Chinese subtitles, but primarily cater to audiences familiar with Western, liberal arts approaches to learning.

Starting Oct. 31, a new HarvardX course on China hopes to reach into the Asian nation by thinking like a local. Delivering a mix of history, politics, and philosophy, the team behind the ambitious course is doing as much to make Chinese civilization accessible to those who have never set foot in the world’s most populous nation as it is to garner interest among its residents.

Junjie Liu, a course developer at HarvardX, worked hard to make the class relevant to Chinese audiences. Liu, a native of China, recently completed his master’s degree in technology, innovation, and education at the Harvard Graduate School of Education (HGSE).

He has publicized ChinaX on three powerful social media websites: Renren, Guokr, and Weibo. The latter is one of the most popular sites in China, boasting a user base of more than 500 million, and with functionality more sophisticated than Twitter’s. The former sites cater to college students and the Massive Open Online Courses (MOOC) community, respectively.

Although MOOCS are not particularly well known in China, online lectures given by Harvard faculty members have in some cases reached cult status there, with Michael Sandel (of “Justice” fame) and Tal Ben-Shahar (of “Positive Psychology”) creating the two most popular lectures on the Chinese open learning site NetEase.

Liu is seeking to build on that notoriety to increase interest in ChinaX, using video clips to highlight the role of Harvard faculty in shaping the course.

“We’re planning on doing a ‘meet the professors’ video segment with Professors Peter Bol and William Kirby, which will be posted soon on social media platforms,” Liu said. “With the Oct. 31 launch, the course has already registered 22,000 students, and we’re expecting more enrollees from our social media efforts.”

But what might the college students targeted on Renren — who presumably have had lessons in their own history — gain from an American-based survey course on China? Using more than names and dates, the course team expects that even those well-versed in Chinese history will gain intriguing insights into how Western academics and laypeople view the 4,000-year-old civilization.

The desire for such a perspective is quite common, as revealed by the experiences of Meghan Morrissey, lead course developer for ChinaX, and a recent HGSE graduate. When she taught in central China, she said, her students “would often ask about America and were very curious to understand how Americans looked at China, how we learned about its history and China today.”

ChinaX is, however, going beyond just expanding access to knowledge, a tenet commonly associated with MOOCs, and instead pointing toward to a grander mission of intercultural understanding.

“We are on a path to make Harvard’s knowledge truly global,” said Robert A. Lue, faculty director of HarvardX. “This is not just translation, but transformation. I really applaud the efforts by the ChinaX team to reimagine everything.”

Lue, professor of the practice of molecular and cellular biology, is also the Richard L. Menschel Faculty Director of the Derek Bok Center for Teaching and Learning. The longstanding endeavor seeks to support faculty explorations of novel pedagogy closer to home — an effort not lost on the ChinaX team.

In fact, the online ChinaX course has already been transformational right on Harvard’s campus. A product of teacher-student collaboration, the origin of the course dates back more than a year to the input of students in the Chinese History 185 seminar, taught by Bol, the vice provost of advances in learning and Charles H. Carswell Professor of East Asian Languages and Civilizations.

In an early version of the course taught at the Harvard Extension School, video lectures were used to allow for more in-class discussion time.

“Our inclusion of online components actually first emerged as an attempt to do right by our Extension students,” added Bol.

Bol and the ChinaX team continue to harness technological innovations to improve the educational experience of knowledge-hungry students, be they in Harvard Square or Nanjing, Jiangsu province.