The watchword is innovation 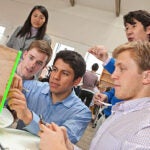 Where students own their education

Harvard Schools point toward future where creativity is king

This is the third of four reports echoing key themes of The Harvard Campaign, examining what the University is accomplishing in those areas.

Innovation? That was not always one of Harvard’s goals. When it opened in the 17th century, New England’s first college was an institution for educating ministers and lawyers, offering a sound classical curriculum, with facility in Latin required for entering freshmen.

In recent decades, “Harvard” and “innovation” have melded to such a degree that those two words might well be spelled the same. Pressing for the new to solve the old has entered the fabric of the curriculum, from Harvard’s strong humanities and the arts (where digital frontiers are being breached) to its probing sciences, whether pure, applied, or social.

“Harvard is about possibilities,” said President Drew Faust in her remarks Sept. 10 opening the academic year. “Here, it’s possible to change how our successors will think about learning and teaching.” She delivered similar comments in launching The Harvard Campaign last Saturday.

The Harvard innovation picture can reflect a solo effort, as in the case of Olenka Polak ’15, whose app, myLINGO, can translate foreign movies in real time. Or innovation can be a team effort — the mainstay of bench science — like the work of a group run by chemical biologist Xiaoliang Sunney Xie that is investigating life forces at the level of single molecules in live cells.

Some innovations are the province of Harvard institutions. They can have likely names, such as the i-lab, which stands for Harvard Innovation Lab, a University-wide, border-breaking engine of interdisciplinary creativity. Another is the Government Innovators Network at the Harvard Kennedy School’s (HKS) Ash Center. There are innovation-driven entrepreneurship centers at Harvard Business School (HBS), and the School of Engineering and Applied Sciences (SEAS).

In such places, Faust said, Harvard’s entrepreneurs “are building apps and businesses and cultural enterprises.”

HBS, in fact, pioneered the use decades ago of the case study method, which gives students real-world business scenarios and asks them to come up with their own solutions to problems. It is a system that dovetails well in encouraging an entrepreneurial mindset.

Engineers out at the edge

SEAS is pronounced “seize,” as in, seize every opportunity to make the new and remake the old. Research projects under way there include developing a soft and wearable “exosuit” that supports the human body while carrying heavy loads (from Conor Walsh) and adaptive camouflage inspired by cuttlefish (from Joanna Aizenberg). Over the summer, a new student group called Nanostart began creating a community around nanoscale innovation and entrepreneurship. Graduate students, researchers, and companies come together to brainstorm inventions.

Courses at SEAS point right at innovation. This semester, the traditional ES 96 (a required junior-level design course for concentrators in the engineering sciences) will take on therapeutic uses for manufactured human cells. The goal of ES 96, as always, is to teach design theory through a hands-on project.

That touches on another leitmotif within Faust’s semester-opening remarks, her call for “expanded opportunities for hands-on experimental learning.”

This fall, SEAS is offering a new course that points to the future: ES 27, “Digital Interfaces for Collaborative and Participatory Design,” a joint listing for SEAS and the Harvard Graduate School of Design (GSD).

As a design school, GSD is a place where the future of the built environment is first imagined. But it is also a place of teaching innovations. Many students are driven by an intensive system of required studio courses that demand an eclectic mix of experts, from engineering and ecology to model-building and drawing. (Next spring there will be a GSD course called “Landscape and Painting,” in which student designers sharpen their visual wits by working in oils and acrylics.) In the field, GSD is also breaking ground on some research study sites by teaming graduate students in anthropology and design.

At the core, collaboration

Faust reminded her audience of innovative learning collaborations like that novel pairing. She even gave Harvard’s academic collaboration a new locus of its own. Allston, said Faust, is “a place where we can experiment with the increased fluidity of boundaries between fields and Schools, and between the University and the wider world.”

In the names of still other Harvard institutions, innovation is implied. There is the Digital Arts and Humanities Committee, for instance, an arm of the Arts and Humanities Division. Not long ago, putting “digital” and “arts” together would have sounded like a typo, but today it describes a creative frontier of crisscrossing boundaries. There are 15 departments on that committee, along with 15 museums or other centers, five undergraduate degree concentrations, and a scattering of related programs.

Though the Semitic Museum often pores over the past, it offers digital exhibits — not bad for an institution founded in 1889 — and landmark initiatives in digital publishing for archaeology and data management, part of the Shelby White and Leon Levy Program for Archaeological Publications. The museum’s director, Peter Der Manuelian, the Philip J. King Professor of Egyptology, keeps the Harvard Giza Project on a digital cutting edge. Showing 3-D virtual worlds, he can lead students on tours of the Giza Plateau as it was 4,500 years ago, skimming over pyramids, then plunging into burial chambers.

Visualization is at the heart of another example of innovation, the interactive FloTree at the Harvard Museum of Natural History. This interactive touch-table allows users to explore interconnecting evolutionary patterns in flora and fauna with the swipe of a finger. It was developed at the Scientists’ Discovery Room Lab at SEAS, directed by Chia Shen, the principal investigator for the federally funded Life on Earth project.

In addition, at Harvard many small-scale, little-known innovations display boundless creativity. A springtime design and project fair in the Science Center Plaza, for example, showcased: a basketball hoop that keeps score; a laser harp; a mind-controlled car; a one-wheeled, self-balancing electric vehicle; an automatic fish feeder; and a math system for crowdsourcing stock picks. Students from the popular ES 50 course wandered through the crowd, wearing T-shirts that said, “Trust me: I’m almost an electrical engineer.”

Earlier this year, two students in the SEAS “Design Survivor” course created a tear-shaped travel mug that can’t tip over. Two undergraduates in a SEAS course called “Design of Usable Interactive Systems” created an apt app for their ages: It tracks drinking behavior.

Other Harvard innovations were more speculative, pointing to applications on a farther horizon. Consider Assistant Professor Sharad Ramanathan’s remote-controlled worms, for instance. His team at the Department of Molecular and Cellular Biology used targeted lasers to manipulate neurons in the brains of tiny, transparent C. elegans. Their novel investigation technique not only guided wiggling worms but also may help to unravel how the human nervous system works.

There have been innovations in pedagogy too. This spring, the Graduate School of Arts and Sciences (GSAS) introduced an innovation to make fledgling scholars better communicators. In September, GSAS underscored its commitment to innovation in research, graduate study, and the changing future of dissertations. It held an open house about its new Ph.D. secondary field degree in critical media practice, which encourages digital projects that complement written work and break the mold of a text-bound scholarly hurdle as old as print and paper.

Then there is metaLAB@Harvard, a place for creating, as its mission statement says, “innovative scenarios for the future of knowledge creation and dissemination in the arts and humanities.” Last fall, metaLAB affiliates created the “Labrary,” a student-designed, pop-up space on Mount Auburn Street. On display were artifacts hinting at what libraries of the future might look like. There was a retreat-like, inflatable Mylar tent, a bench that was part boom box, and a one-legged “unsteady stool” to keep the user alert.

In April, the Digital Public Library of America launched a beta version of its discovery portal, opening a free-access digital archive of 2.4 million works. The project, a virtual network of national and local libraries, started two years ago at Harvard’s Berkman Center for Internet and Society, itself an innovation machine.

The Berkman Center developed H2O, an educational exchange platform for creating, editing, and sharing course materials electronically in collaboration with the Harvard Law School Library. But H2O will not always be “law-specific,” said law professor and center co-founder Jonathan Zittrain. Available in sharable electronic form, the new format could offer what he called “an intellectual playlist” of online materials widely used — and collaboratively assembled and vetted — by students and professors in any discipline.

“Technology promises both wondrous possibilities and profound dislocations,” said Faust in her semester-opening remarks. Then she mentioned two entities that foster innovation.

The Harvard Initiative for Teaching and Learning, now in its third year, is designed to accelerate the new and the best in those areas. So far, 150 faculty, students, and staff have gotten support from HILT. Then there is HarvardX, now in its second year. So far, nearly 60 faculty members are either offering or preparing courses widely available on line.

This fall the Harvard Kennedy School will offer HKS211.1X, an eight-week, experimental-format class open to 500 students online and to 50 in the traditional classroom setting. The idea is to investigate and analyze options for addressing three of America’s most pressing foreign policy concerns, “each of them, in effect, problems from hell,” said co-teacher Graham Allison in an introductory video: a possible incursion into Syria, concern over Iran’s nuclear program, and the rise of China to mighty power.

As for the new format, Allison, director of the Belfer Center for Science and International Affairs and the Douglas Dillon Professor of Government, added a comment that sums up both the hope and the trepidation that innovation contains. “The ‘X’ in the course,” he said, “stands for experimental.”

In her remarks, Faust picked up on the same two-edged threshold that connects the sturdy past to the innovative future. Teaching and learning at Harvard will “both preserve what Harvard has been,” she said, and “evolve to meet the demands of these changing times.”