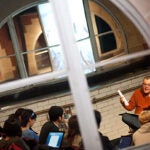 New media is becoming a touchstone in some dissertations

We all know the look of a doctoral dissertation: thick, heavy, and tightly bound. Inside it are phalanxes of paragraphs. Words march past by the thousands.

Text-heavy dissertations, after all, are artifacts of a medieval university culture that gave the printed word scholastic pre-eminence.

But Harvard anticipates scholarship that goes beyond the written word. It welcomes film, photo, audio, and other means of cultural expression, without abandoning the traditional rigor of academic investigation.

One sign of this new wave came last fall, when the Graduate School of Arts and Sciences (GSAS) approved a secondary Ph.D. field in “critical media practice,” proposed by Harvard anthropologist Lucien Castaing-Taylor and Joseph Pellegrino University Professor Peter Galison. For the first time, doctoral students can now incorporate video, film, photography, exhibition, hypermedia, the Internet, and other sources of nontextual information into their academic work. Students can apply starting this semester.

They are required to take two core courses, two electives, and do a “capstone” media project that complements the written dissertation. In a few years, Harvard will graduate its first Ph.D.s who create these scholarly hybrids.

One of the new secondary field’s required core courses was offered last fall at the Harvard Graduate School of Design (GSD). GSD 3418, “Media Archaeology of Place” (jointly offered as ANTH 2837 and VES 162), was an experiment in breaking boundaries and blending disciplines. The course website told its students, “Nothing like this has been done here before.”

A mix of graduates and undergraduates signed up from anthropology, design, music, and film. Their task was to “excavate” learning in a new way, by searching for “the media archaeology” of Boston. They used old and new media that revealed regional portraits not seen before.

In part, the course was the latest flowering of experimental media archaeology work done over the past 10 years by Jesse Shapins, a GSD instructor in architecture. He and others developed collaborations that used digital media to capture street-level, multisensory portraits of city life and history.

Among the interactive database projects created were The Colors of Berlin, Yellow Arrow, Capitol of Punk, and The Secret New York.

The media archaeology course was offered with Harvard’s Sensory Ethnography Lab, a collaboration between the Department of Anthropology and the Visual and Environmental Studies program (VES).

In the spring, the exhibit will be released as a “DVD publication” funded by the Provostial Fund for Arts and Humanities. It will be distributed to libraries, just like a book or a journal. “The idea is to experiment with new forms of multimedia scholarly publications,” said Shapins.

Around the same time, in April, the first issue of Sensate will appear. The online journal will be the first at Harvard that invites scholars to use audio, video, and other nontraditional media. Sensate is a graduate student collaboration between Harvard and the Massachusetts Institute of Technology.

As the first “Media Archaeology” class unfolded last fall, each student became an authority on an undiscovered corner of the Boston area. Their final projects were presented in December at Gund Hall before a battery of critics.

Julia Rooney ’11, a VES concentrator, studied Somerville, Mass., by exploring the facades of its houses. Her impressionistic stills, set against street sounds, were lush and intimate: rooflines, siding, gables, fencing, and foundations.

“I abandoned myself to looking,” said painter and project critic Matt Saunders ’97, a visiting lecturer at VES.

Overlaying Rooney’s painterly images were schematic fire insurance maps from a 1933-50 Somerville catalog. Once into the project, she said, “I became interested in making a deeper annotation of these residential structures.”

In another instance, Robert Pietrusko, a GSD master’s student in architecture, used old video footage, archival interviews, maps, old posters, and a trove of zines to excavate a “Boston Musical Undercommons” — “rich historical moments,” he said, of a long-vanished Boston punk rock scene that was “sweaty, active, and aggressive.”

McMurray invited everyone to “pile in other data,” a collaborative, interactive notion that informs media archaeology. It’s still scholarship, but it has some of the restlessness of the road.

This semester, the same course themes will be expanded in GSD 3448, “The Mixed Reality City,” co-taught by Shapins and Burns, the economics student. Students will “excavate” Harvard Square, seeking how it has been recorded and represented in film, pictures, and other media. “The emphasis this time,” said Shapins, “will be on producing projects that use mobile devices such as iPhones to layer stories in physical space.”

Other signs of the same awakening to multimedia scholarship are evident on campus. On Feb. 10, the Humanities Center at Harvard will present “Digital Humanities 2.0,” a public conversation on the arts and humanities in the information age.

Listeners are invited to read a manifesto of the same name beforehand. “Print is no longer the exclusive or the normative medium in which knowledge is produced,” the document said. “Knowledge assumes multiple forms.”