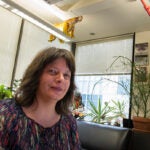 A marker for breast cancer

A team at the Wyss Institute for Biologically Inspired Engineering at Harvard University has received a $5.6 million grant from the United States Food and Drug Administration (FDA) to use its organs-on-chips technology to test human physiological responses to radiation and evaluate drugs designed to counter those effects. The effort will also be supported by a team in the vascular biology program at Children’s Hospital Boston.

The multiyear project will investigate whether organs-on-chips — tiny, microfluidic devices that are lined by living human cells and mimic complex organ physiology — can be used instead of animals to evaluate the efficacy and safety of medical treatments for radiation sickness, or acute radiation syndrome (ARS). Animal models often fail to accurately predict human responses, and human subjects cannot be tested with exposure to lethal radiation.

ARS occurs when the body receives a high dose of radiation, usually over a short period of time. Symptoms range from loss of appetite, fatigue, fever, nausea, vomiting, and diarrhea to seizures, coma, and death. The project is part of the FDA’s Medical Countermeasures Initiative (MCMi), which it launched in 2010.

“One of the fundamental goals of the MCMi is to ensure that we are prepared to respond effectively to acts of terrorism that may involve radiological or nuclear attacks, and to incidents such as the Fukushima nuclear disaster in Japan in 2011,” said Luciana Borio, head of the FDA program. “We have a lot to learn about the human physiological response to radiation, and are excited to explore the potential of the Wyss Institute’s novel human organs-on-chips in filling that knowledge gap in a safe and cost-effective way.”

Combining microfabrication techniques with modern tissue engineering, lung-on-a-chip offers a new in vitro approach to drug screening by mimicking the complicated mechanical and biochemical behaviors of a human lung. This extended version of the video includes Wyss Institute findings when its researchers mimicked pulmonary edema-on-the-chip.[/gz_video]

Earlier this year the institute’s lung-on-a-chip received the 3Rs prize from the U.K.’s National Centre for the Replacement, Refinement, and Reduction of Animals in Research (NC3Rs). The award followed a landmark publication in Science Translational Medicine demonstrating the team’s success using the lung on a chip to model human pulmonary edema (commonly known as fluid on the lungs) and to test potential new drug therapies under development.

“We currently have over 10 different organs-on-chips in development, and are excited to work with the FDA to explore a new way to rapidly identify radiation countermeasures without having to rely on animal studies,” said Wyss Institute Founding Director Donald Ingber, who leads the organs-on-chips effort at the institute.

The FDA-funded project will study three organs on chips. The three devices mimic the structure and physiology of human bone marrow, gut, and lung. These organ systems are the most susceptible to the toxic effects of radiation in humans, because of exposure to airborne particulates in the case of the lung, and extremely high cell turnover rates in the cases of the gut and bone marrow.

“Our organs on chips enable us to investigate how specific human cell types and organ systems respond to radiation — something very difficult or impossible to mimic in animal studies,” said Wyss senior staff scientist Anthony Bahinski, who is helping lead the project. The effects of radiation and organ-level responses to potential radiation therapies can be observed in real time; the microdevices, about the size of a memory stick, are made of a clear, flexible polymer and can be attached to sophisticated imaging equipment.

The lung-on-a-chip re-creates the way the human lung physically expands and retracts when breathing, and the gut on a chip mimics the peristaltic motions of the gut. This ability to replicate the physical microenvironment of living organs enables the organs on chips to recapitulate functions with a fidelity not possible in conventional culture systems, and it represents a key advantage of these novel bioinspired microtechnologies.

The bone marrow chip employs a unique approach to organ-chip design in which the team uses tissue engineering to form a whole bone with an intact marrow in vivo — and then surgically removes it and places it under microfluidic conditions in the laboratory. From there it can undergo testing in response to radiation and radiation therapies.

“We should have a much better understanding of how our bones, intestines, and lungs respond physiologically to radiation and radiation therapies at the conclusion of this project,” Bahinski said.

In addition to the FDA, the Wyss Institute acknowledges support that led to the development of the organs-on-chips technology from the Defense Advanced Research Projects Agency and the National Institutes of Health.