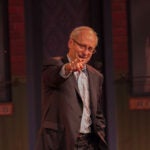 Summer writing program looks at news through the filter of film

The first of the free weekly offerings, on June 25, drew an audience of 50 to Hall A in the Science Center. “Page One: Inside The New York Times,” a 2010 documentary, offers a rare inside view of how news is gathered and tweaked and filtered at the famous Gray Lady.

More importantly, the hourlong film looks at the single most pressing question for traditional media outlets today: Will they survive the slings and arrows of the new media age? Tweets, blogs, news-aggregating websites, and other information alternates are raining down on Fortress Newsroom nationwide, knocking profits awry, killing ad revenue, and picking off veteran staffers.

At the Times, according to voices in the film, the answer is yes — it will change and grow and survive. It was the Times, for one, that pioneered a system of paying for online content. The paywall is slowly restoring lost profits, and with them the hope that traditional newsgathering and authoritative editing will survive.

A working journalist will introduce each film in the series and lead a discussion afterward. For “Page One,” the commentator was Alex Jones, Nieman ’82. The former Times staffer, who was actually featured in the film, is now Harvard’s Laurence M. Lombard Lecturer in the Press and Public Policy and director of the Joan Shorenstein Center.

The voice in “Page One” that delivers the strongest message of survival and hope for news traditions is the Times media and culture columnist David Carr. The raspy-voiced former cocaine addict is the film’s unlikely oracle, often seen walking stoop-shouldered through the newsroom with a bottle of caffeinated soda on his way to grab a cigarette.

Carr respects the collective portraits of a situation that Twitter and other new media can contribute. But at the same time he is a pen-and-paper guy who in the film confronted two new reporters busy reading texts. Carr threatened to fling the devices over a fence. Aware of digital pressures, he said at one point: “I would consider it unspeakable if The New York Times ended up a diminished place.”

After the film, Jones answered questions about newsroom culture, with its surprises and long hours; he defended professional newsgathering; and, toward the end, drew a comparison between his former and current employers. “Harvard and the Times are practically blood brothers,” said Jones of institutional fame and the hubris that sometimes comes with it. “At the same time, they are what they are — institutions of great power.”

As for the future, he added, many institutions might just melt away in the heat of the coming digital age, but “Harvard will be like The New York Times: the last iceberg.”

Up next in the 6:30 p.m. film series (on July 2) is “The Paper,” a 1994 Ron Howard comedy about 24 hours at a fictional tabloid. It’s worth a watch just for Michael Keaton’s portrait of a caffeinated metro editor who finds his moral center — and gets into a pressroom fistfight to prove it. Introducing the film will be Laura Wides-Munoz, Hispanic affairs writer for the Associated Press.

The series wraps up July 30 with “His Girl Friday,” a 1940 Howard Hawks newsroom comedy starring Cary Grant and Rosalind Russell. How do you spell “zany”? Grant, the editor, might help you out, but don’t believe anything else he says.