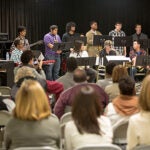 The manhunt for a bombing suspect shut down the Boston area on Friday. With Harvard temporarily closed, a pair of two-day scholarly conferences had to be compressed into Saturday alone. But by chance, both provided perspective on the area’s brush with terror.

“Confronting Evil: Interdisciplinary Perspectives,” sponsored by the Mahindra Humanities Center, was about the rhetoric and psychology of evil, what it is like to witness it, and how society should respond to it. Scheduled months ago, the conference of international scholars at Emerson Hall — interrupted by real-life terror — acquired a sudden, local immediacy.

During the morning, in a presentation about the cognitive neuroscience of morality, behavioral psychologist Joshua Greene, Harvard’s John and Ruth Hazel Associate Professor of the Social Sciences, referred to what can seem like “the badness of others and the goodness of us.”

In the afternoon, Jacqueline Bhabha, University adviser on human rights, introduced a panel on witnessing evil, calling it “very decidedly present” in the light of events in Boston. University of Oxford scholar Linn Normand looked at demonization as a default setting. Panelist Richard Shweder, a University of Chicago cultural anthropologist, warned of what could seem like evil to some: pushing Western values too hard in faraway places.

Panelist and Radcliffe Fellow Gazmend Kapllani, a novelist who grew up in the state-terror regime of Iron Curtain Albania, set aside his formal remarks to recall the eerie quiet of Brattle Street in Cambridge the day before. “The emptiness of the street will stay with me for a long time,” he said. “It was a symbol of the fragility of good.”

The second conference was “Proust and the Arts,” an interdisciplinary gathering at Boylston Hall that marked the centennial of “Swann’s Way,” the first volume of “In Search of Lost Time.” This work by Marcel Proust is the longest novel in Western literature. Transacted half in French, the conference might have seemed remote and arcane at that moment. But the reclusive French novelist turned out to provide an apt antidote to terror in America.

Proust used 1,200,000 words in seven volumes to convey a message that can be compressed into just a few: Slow down, observe, engage, and remember. Love life. Its moments — fleeting and delicate — soon belong to the past. Only dreams, or the exquisite pain of memory, can bring them back.

“Life would suddenly seem wonderful to us if we were threatened with sudden death.” Marcel Proust

Proust, an avid collector of sensory exactitude, prized life’s moments, from the boyhood sound of his mother’s footsteps to the sip of lime-flower tea that inspired “the vast structure of recollection” that became “Swann’s Way.” Why cling to such moments? Proust once wrote, “Life would suddenly seem wonderful to us if we were threatened with sudden death.”

Sindhumathi Revuluri, an associate professor of music at Harvard, presented “Sound and Music in Proust.” Aside from allusions to actual scores, she said, the novelist saw music as sometimes simply the quotidian sounds of a household: an old aunt snoring, the clatter of kitchen utensils, or “the double peal — timid, oval, gilded — of the visitors’ bell” that always announced Swann’s arrival to the house in fictional Combray. These sounds, and music too, “open memory,” said Revuluri, and invite transcendence.

Then there is Proust’s celebration of life through relationships, starting with his mother and extending to “irregular kin,” the title of a paper by conference co-organizer François Proulx. The paper was about the writer’s relationship with his lover Reynaldo Hahn, and the mother-daughter pair of French socialites who concealed and enabled this forbidden love from 1894 to 1896. (“Private Proust,” on display in the Houghton Library’s Amy Lowell Room, is an exhibit of related correspondence. The display is just one component of Proust-related exhibits, concerts, screenings, and lectures at Harvard this spring.)

And then there is laughter, a terror-dispelling act that Proust was said to appreciate, though his writing is not famous for its humor (unless bemusement counts). Columbia University scholar Elisabeth Ladenson presented a paper on “Proust and the Marx Brothers.” Harvard College’s Virginie Greene, professor of romance languages and literature, drew laughs with her five-part paper on art and craft in Proust. She titled the first “The Man Who Could Not Make His Bed.” He also could not wield a hammer, cook, or launder, she said.

Proust scholar Antoine Compagnon of the Collège de France and Columbia may have come closest to providing a healing antidote to the week that shook the Boston area. His paper “L’art de l’ échec” (“The Art of the Setback”) ended the conference with a deep reading of changes that Proust made to the manuscript of “Swann’s Way” on April 19-20, 1913. Exactly 100 years before the conference’s original schedule, it turns out, Proust went from seeing himself as a failure (for his oft-rejected novel) to an achiever. Boston, perhaps, might do the same.