Borders, books, and the Balkans 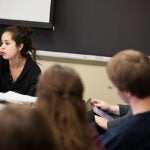 Albanian novelist, a Radcliffe Fellow, draws inspiration from his nation’s ink-dark past

As a boy in sealed-tight Communist Albania, Gazmend Kapllani grew up in a house with two libraries. One was a “window library” for show, mostly containing works by political icons Karl Marx, Vladimir Lenin, and Albanian party leaders. (Three whole shelves were devoted to the 80 books by the Balkan nation’s enigmatic leader, Enver Hoxha.) In his parents’ bedroom was a second library, concealed in two black suitcases. These were the “damned books,” forbidden by a totalitarian regime so isolated and repressive that Kapllani has called it “the North Korea of Europe.”

The same boyhood house in Lushnjë had two aerials. One was on the roof, for show, angled to receive official state television broadcasts. The second, hidden inside, was designed to pick up signals from forbidden foreign stations. Included was Italian public radio, which Kapllani credits with inspiring his literary education — a consequence of his learning, on the sly, Italian and French.

“I learned foreign languages in order to catch images of this world beyond the border,” said Kapllani, who is now a novelist and the Rita E. Hauser Fellow at Radcliffe.

During the era of Iron Curtain Albania, the border was a formidable double line: one to demark the national border and another to enclose restricted villages uncomfortably close to freer nations. As a boy, Kapllani went on a school trip that at night brought him within sight of the glittering lights of the West. (The story, and the wonder of it, is recounted in his 2009 “A Short Border Handbook,” which he cautioned is an interweaving of memories, fiction, and testimony he gathered as a journalist, his original profession.)

“I grew up in a small country with a totally shut border,” Kapllani said. “You could not even approach the border, and you were in serious danger if you even talked about borders.” By age 11, “that terror I began feeling on my skin,” he said. “You understood the people who ruled your country are violent; they are paranoid. The whole country was like a prison.” As a teenager, Kapllani was required to complete two weeks of military training a year, during which young Albanians were told to prepare for hordes of invaders. “You look around,” said Kapllani, remembering those days. “You don’t see any enemies. They’re imaginary enemies.”

A short riff on this invasion paranoia comes up in “A Short Border Handbook,” when the Hoxha regime builds hundreds of bunkers along the Adriatic and Ionian seas. They remain empty, and young lovers soon appropriate them for trysts.

There is a present-day example of the same intense isolation, terror, and paranoia, he said: North Korea, which holds onto a national vision of apocalyptic war and pervasive enemies, a cultural narrative that reason cannot penetrate. “The regimes of these countries cannot live in a peaceful way with the world,” he said of the Albania of his boyhood and of today’s North Korea. “Peace to them means the end of their world.”

Kapllani said his childhood gave him the gift of his three literary obsessions: borders, books, and the Balkans. The last, he said, is a fractured region that not long ago contained both the physical terrors of totalitarian regimes and the dream-like proximity to nations representing liberty.

Listen to Gazmend Kapllani discuss the parallel lives of the Albanian communist dictator Enver Hoxha and Albania’s first woman writer, Musine Kokalari, who was imprisoned by the dictator’s regime.

“We are all survivors,” he said of those who grew up in places where state-sponsored violence was common. But his upbringing also gave him, paradoxically, a sense of love, affection, and belonging. His father was a surveyor, and his mother was an elementary schoolteacher “who taught everything.” Both belonged to the Bektashi Order, a branch of Sufi-inspired Islam famed for its tolerance. They raised him in a household full of warmth and attention.

And Lushnjë itself, a small agricultural city in south-central Albania, embodied an accidental tolerance. His grandparents had been banished there for having been small landowners, and therefore politically suspect. The government exiled many dissenters and political outcasts to Lushnjë, and it became a kind of cultural gulag populated by the open-minded and the well-traveled, who celebrated freedom in hidden ways. “There was an underground, thriving cultural life in the city,” he said.

Kapllani’s very name contains echoes of tolerance. In the month and year he was born, August 1967, Albania — “at the peak of its paranoia and repression,” he said — forbade the practice of religion, and of giving the newborn religious names. (Albania was then an enclave of Christian, Muslim, and Jewish traditions.) So his parents invented a new first name, “Gazmend,” which in Albanian means “joyful mind.” His last name is an expression of tolerance since it is widely used in Arab, Jewish, and Muslim cultures. But “Kapllani” is also an expression of power, meaning tiger.

A journalist, poet, novelist, and human rights activist, Kapllani remains a joyful-minded tiger. In 1991, at age 24, he fled across the border to Greece, one of many Albanians who were not sure how long the gates to the West would remain open. (In “A Short Border Handbook,” testimonies reflect a dark side of this mass border crossing. Many refugees were shot at random, and women — suddenly vulnerable outside a structured homeland — were routinely raped.)

In Greece, the young Kapllani worked as a builder and a kiosk attendant, mastering Greek quickly and studying to earn a Ph.D. in political science. He also experienced an irony familiar to new immigrants: Things are not always so different on the other side of the border. In Greece at the time, he said, Albanians were widely disparaged as a dirty, uncultured, and seething criminal class.

As a journalist, Kapllani had escaped Communist persecution, only to confront fascist persecution — from Golden Dawn, a right-wing, anti-immigrant party. Kapllani, a journalist and commentator, was targeted for his views in favor of national diversity, justice, and human rights. In 2003, two plainclothes Greek police officers sympathetic to Golden Dawn took him into custody without a warrant. “I was threatened, I was humiliated, they tried to destroy me and my personality,” said Kapllani. His plight captured the attention of international human rights groups, and he was released.

In 2006, he crossed another border, into fiction writing. “Journalism helped me a lot in learning how to do field research,” said Kapllani, whose three novels since then reflect his love of facts and testimony. But in fiction “I learned to activate the imagination,” he said. “I felt the language being freed.”

During his year as a fellow at the Radcliffe Institute of Advanced Study, Kapllani is working on another novel, “Tales of Extreme.” Starting in 2009, he visited Albania’s state archives to explore the enigma of Hoxha, who he calls “my tyrant.” The dictator routinely exiled, imprisoned, or killed Albanians for their reading habits, but all the while indulged in a secret weakness for Western literature. By the time of his death in 1985, Hoxha had amassed a library of 20,000 titles, purchased at the rate of tens or hundreds of titles a month. Kapllani opens the novel with the future dictator walking into a Paris bookstore in May 1934 to buy “Journey to the End of the Night” by Louis-Ferdinand Céline, “one of the most beloved books of his life.”

Kapllani would know. For four years he has studied 1,000 photocopied pages of Hoxha’s book acquisitions going back to 1954, showcasing obsessions that include Symbolist poetry, biographies of American presidents, and detective fiction. Along the way, Kapllani interviewed people who “in the past belonged to the powerful and pitiless class,” he said. Among them were labor camp guards, state investigators, “other minions in a paranoid system,” a daughter-in-law, and Hoxha successor Ramiz Alia, who has since died.

“Judging them is not enough,” Kapllani said during a recent Radcliffe talk. “I have to understand them.”

Along the way, he discovered what has become a cliché regarding the tumbled elites of former dictatorial regimes: No one is ready to apologize. “They never repented,” said Kapllani of his interview subjects. “They were unable to carry a sense of guilt.”

But Hoxha and his class occupy only half of the projected novel. The other belongs to Musine Kokalari, Albania’s first female author, who was arrested as an “enemy of the people” in 1946, imprisoned until 1964, and then interned in a northern town until her death in 1983. In her last 19 years, still forbidden to write, she was a street-sweeper. “I got sick,” Kapllani said of looking at her file in a secret archive.

The catch in the coming novel is that both Hoxha and Kokalari were raised in the same southern Albanian town, Gjirokastër, and were less than 10 years apart in age. It’s a book about dual lives, and opposing visions — one of the world that came to be and one of a world that might have been.

Kapllani will teach at Emerson College beginning in the fall. As a writer, he seems poised to cross another border. “I’m going through a linguistic crisis here in the States,” said Kapllani, in his spare, sunny office in Byerly Hall. “I am writing now mostly in Greek, but with many passages in Albanian and English.”

He sat back in his chair and mused: “Perhaps English is my next linguistic utopia.”