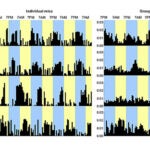 For decades, scientists have studied Caenorhabditis elegans — tiny, transparent worms — for clues about how neurons develop and function. A new Harvard study suggests that the nervous system of the worm is much more complex than previously thought, allowing it to monitor its own motion. The findings suggest a path for research that may shed light on disorders such as schizophrenia.

While most research into the worms’ neurons has shown that each performs as a single functional unit, Yun Zhang, associate professor of organismic and evolutionary biology at the Center for Brain Science, together with her colleagues Michael Hendricks, Heonick Ha, and Nicolas Maffey, has uncovered evidence that different compartments of a single neuron exhibit activities independently of one another. These activities represent self-motion signals. The work is described in a paper published on May 13 in Nature.

Such “compartmentalized” neural activity is typically found only in higher organisms; however, Zhang and her colleagues have demonstrated that the simple unbranched axons of nematode neurons can also generate such compartmentalized local activity. In the interneurons that the researchers study, named RIA, the worms use these local activities to encode “corollary discharge” — a phenomenon in which motor neurons send a “copy” of a motor instruction back to the central nervous system — to monitor their body position and guide their movement about their environment.

“The simplest behaviors to understand were the first ones that were studied in C. elegans: something painful happens and it backs up,” said Hendricks, a research associate and co-author of the paper. “It looked like there was a very clear A-B-C order to its behavior, but when we began to look at these motor outputs, we found that these signals have feedback loops in the system.”

Said Zhang: “What we found is that, in some neurons, the synapses are highly organized at the sub-cellular level, and that organization is associated with local neural activity. In C. elegans, most neurons have one or two unbranched processes which have different synapses located one next to the other. How can these synapses maintain any functional specificity? There almost has to be local activity. But such compartmentalized independent activity in one single neurite was never demonstrated in the worm neurons before.

“Why is that important? C. elegans has only 302 neurons,” she continued. “Before, people simply thought each neuron was one functional module, so all the brain’s computations depended on those modules. What we found is that there are, potentially, many more functional units. That hugely enlarges the computational capability of this relatively simple neural system.”

Because many higher organisms also exhibit compartmentalized neural activity, Zhang said, the finding makes the worm an ideal candidate to study how complex nervous systems work. Among the key questions researchers hope the worm may help them answer is how the corollary discharge phenomenon works, and how it aids in neural plasticity.

The worms typically interact with their environment by sweeping their head back and forth to collect sensory input, such as odor and salt. The corollary discharge is critical because it allows the worms to know how much they have turned their head in a particular direction, and to use this information together with the sensory input to direct their next move.

“Corollary discharge is the reason you can’t tickle yourself,” Zhang explained. “You’ve already sent a copy of the motor command back to your brain telling it what you’re doing. The fact that this phenomenon takes place in a creature like C. elegans is important because it’s been hypothesized that the voices and delusions of people suffering from schizophrenia may be related to impairment in this system.”

By studying that system in C. elegans — how it works, how it can be damaged, and how it might be repaired — Zhang said researchers will be able to gain more understanding on neurological disorders, such as schizophrenia, which may help with ways for treatments.