The record of Japanese disaster 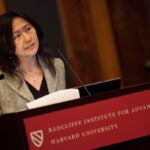 Last year’s set of triple disasters in Japan produced destruction almost past comprehension and sorrow beyond measure. The impact of the earthquake, tsunami, and nuclear accident were enormous, and drew the interest of scholars trying to make sense of what was happening.

In an increasingly dominant Internet age, Harvard experts were among those who quickly grasped the need to preserve the digital ephemera of March 11, 2011, including the tweets, blogs, websites, YouTube videos, and audio recordings, as well as the official records of government agencies and nonprofits. All of that material can provide insight for future researchers and historians — that is, if it can be preserved and made accessible in creative ways.

This week, after months of intensive work, the Edwin O. Reischauer Institute of Japanese Studies and other partners are ready for the initial version of the Digital Archive of Japan’s 2011 Disasters to go live. Users may register at jdarchive.org. A fuller, public rollout is expected this summer.

“It’s been a difficult year, but I think we are doing something that will prove valuable and meaningful to many people,” said Reischauer Institute Director Andrew Gordon, the Lee and Juliet Folger Fund Professor of History, during a March 9 panel discussion on the massive undertaking.

Gordon was joined by Kyle Parry, who is project manager and digital researcher at the metaLAB (at) Harvard, and Eric Dinmore, Reischauer Institute postdoctoral fellow and assistant professor of history at Hampden-Sydney College. With Theodore Bestor, chair of the Department of Anthropology, as moderator, the panel discussed the logistical, legal, and ethical challenges posed by designing an interface for the vast reams of information, some of it highly personal, produced by the disaster.

“Why do we need to do a digital archive? Why not use Google?” Gordon asked rhetorically to kick off the discussion. He answered that Google does not capture tweets. Websites disappear — or change so rapidly that moments in time are lost. Digital photos on Facebook or videos on YouTube are vulnerable to loss. Preserving digital records is a different task than preserving paper material.

Gordon knew that Harvard was in a position to take the lead on creating a digital archive but soon realized the magnitude of the effort was too large for any one institution. Thus, the Reischauer Institute formed partnerships with groups such as Internet Archive — which took action within hours of the initial earthquake — Archive-It, National Diet Library, Tohoku University, Yahoo! Japan, and All311, to name a few.

The scope of the archive efforts includes Chinese and Korean websites, sound recordings, maps embedded with geodata, as well as the tweets, re-tweets, and Facebook posts. No one group can claim ownership of the material, Gordon said, and material should be accessible via portals in many regions.

Building supporting software and search functionality have been daunting tasks. Gordon and his partners wanted something more than a multisite portal or “just a slide show.” They wanted to allow users to add content and create a public space for analysis and debate. As Dinmore noted, “The collection has the potential to move beyond a collection of records to be a public forum.”

Parry detailed how metaLAB is working out technical issues. The search function has been designed to allow researchers to filter material by date, time, and location as well as through tags and media type. “It doesn’t limit you by forcing you to come up with the right keywords,” Parry said. Researchers can access maps enriched with geographically located data for alternative perspectives and meanings.

“By putting together different media sources, images as well as blogs, I can formulate new and interesting connections,” Dinmore said.

The project jumbles the conventional division of scholarly labor in which something happens, and then people comment on the something that happens, and then other people collect those comments and put them in a library, and then archivists catalog them. This raises the question: “What does ethnography mean in a digital, virtual world like this?“ Bestor asked. Access to tens of thousands of tweets, for example, provides “an incredible sense of how people are interpreting a disaster as it happens. … What do you grab? Who do you hug?”

Gordon also hopes to avoid preconceptions on what kind of material to preserve, alluding to a “Field of Dreams” metaphor, and suggesting simply to “build it, and they will come.”

Despite the achievement of the archive’s launch, the participants were aware of the terrible costs of the Japanese tragedies. The session ended with a moment of silence for the victims.