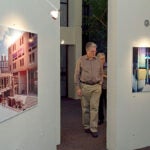 ‘The Creation of Mather’

In 'Henry V,' lessons on authority, identity, and vision

It is the morning of the Battle of Agincourt, Oct. 25, 1415. King Henry V of England has spent the night visiting his soldiers, many of whom believe they will soon die at the hands of the French. When he returns to his tent, Henry’s nobles are waiting. They also despair of the battle to come and talk about the dangers they face. The English are outnumbered five to one. The French troops are fresh, whereas the English are exhausted after months of war. Worst of all, Henry’s army is far from home and can expect no reinforcements.

The king realizes that his troops need something more than arms or numbers; they need inspiration. He speaks to his weary countrymen as they prepare to meet the enemy:

We few, we happy few, we band of brothers;
For he to-day that sheds his blood with me
Shall be my brother; be he ne’er so vile,
This day shall gentle his condition;
And gentlemen in England now-a-bed
Shall think themselves accurs’d they were not here,
And hold their manhoods cheap whiles any speaks
That fought with us upon Saint Crispin’s day.

Nearly 50 Harvard College students sat spellbound as Richard Olivier, son of famed actor Sir Laurence Olivier, delivered the St. Crispin’s Day speech from William Shakespeare’s “Henry V” in Sever Hall on Monday, a day short of the anniversary of England’s victory in battle. The presentation was part of “Negotiation and Conflict Management,” a course that focuses on the emotional and identity-based aspects of conflict that often confound easy resolution.

Assistant professor of psychology Daniel Shapiro, the director of the Harvard International Negotiation Program and the course leader, says he asked Olivier to lead one of the classes in order to teach students about the role of identity in conflict.

“Richard draws on ‘Henry V’ to help students gain insights into the processes of leadership and negotiation,” Shapiro said. “He uses great stories from Shakespeare and draws on his theatrical expertise to create a transformational experience in the classroom.”

Olivier calls his form of teaching “mythodrama,” a leadership development technique that he created in 1997 while at Shakespeare’s Globe Theatre in London.

“We take a myth and we dramatize it,” he told Shapiro’s class. “You won’t have to speak in iambic pentameter, but we will ask you to imaginatively live through the story and to consider three questions: Who are you? Why are you here? And what are you going to do about it?”

For the next three hours, Olivier discussed Shakespeare’s play, breaking the five acts down in the language of identity and leadership. In Act 1, Henry develops his vision: to realize the myth of Albion and unify England, Scotland, Ireland, Wales, and France. In Act 2, the king prepares for war with France, marshaling his resources and dealing with traitors in his midst. In Act 3, Henry meets challenges that force him to change his strategy several times. In Act 4, he faces a “dark night of the soul” at Agincourt and must reconnect with his original vision in order to inspire his men to victory. In the final act, the king has won the battle, but still must decide to end the war and “turn the battlefield into a garden” in order to achieve his vision.

Olivier told the class that the key to Henry’s success was his ability to be an inspirational leader, rather than a charismatic one.

“The charismatic leader will often use people to reflect glory and greatness upon themselves,” he said. “The inspired leader may not be able to pack a football stadium full of 100,000 people chanting their name, but they don’t care about that. The inspired leader wants to get a few people engaged to make a difference to something important. They’re here for a while to do their best. If they can leave the world a bit better, that’s enough.”

When Henry gives the St. Crispin’s Day speech, Olivier said, he shares with his troops what inspires him: not gold or glory, but honor for everyone in his army, both noble and commoner. He invites any soldier not committed to the cause to leave, offering to pay their way home. Even after the 8,000 English turn back 40,000 French at Agincourt, Henry gives credit to God and to his men, not to himself.

“I’m in this for the greater honor of us, England, Albion, St. George,” Olivier said, paraphrasing Shakespeare. “And I invite you to come with me.”

Shapiro says that this sort of inspirational leader – someone who knows him or herself, someone driven by the common good, rather than ego – is best able to engage in successful negotiation and conflict management. Leaders in government and politics could learn a lot from Henry V, he says.

“What makes Henry so effective is that he’s building an incredible amount of affiliation,” Shapiro says. “He respects the autonomy of his soldiers to the nth degree. He tells them, ‘Look, you can fight or not. In fact, if you don’t want to fight, I’ll pay you.’ Now you look at the way that our government’s dealing with its issues. Have the sides been negotiating with that sort of respect? I fear they have not.”

Papa Chakravarthy ’12, an economics concentrator who’s applying to medical school, had never read or seen the play, but said that Olivier’s presentation gave him a lot to think about.

“I was intrigued,” he said. “I was interested in Henry’s ability to put the needs of people that he didn’t know above the needs of those who supported him. It seems like Shakespeare created this perfect model for a leader. I took a lot of notes during class and I’m going to think about them over the next few days. I really got a lot out of this class.”