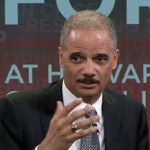 In her Fellows’ Presentation, Nancy E. Hill, the Suzanne Young Murray Professor at the Radcliffe Institute, attempted to do what she herself acknowledged is almost impossible. That is, step outside one’s own cultural belief system to dispassionately analyze data about parenting styles.

As she explained after her May 11 presentation, “Everyone operates from an implicit cultural belief system that shapes how we think and who we are and what we value and what’s important.”

People don’t always realize this “because their own implicit beliefs feel natural. And when they are around people who are like them, [beliefs] feel universal — but they are not.”

In her talk — “Cultural Worldviews and Belief Systems as Lenses to Understand Ethnic Variations in Parenting and Children’s Development” — Hill described her work disentangling cultural, structural, and economic sources of parenting beliefs and practices across ethnicities. The presentation — the last of Radcliffe’s 2010-11 series — covered Hill’s research into socialization and cultural development as seen through the lens of parents’ interaction with children and how this interaction varies across geography, income levels, and ethnicity.

Hill, a professor at the Harvard Graduate School of Education and a psychologist by training, said she came into the field of psychology “because I wanted to understand the origins of people’s values and belief systems.” This was triggered by her fascination with the history of the 1960s, a time when people changed cultural paradigms, altering the belief systems that direct how they see the world.

Socialization, the process by which people acquire beliefs, behaviors, and values, is not innate even though it may seem to be. “You’re not socialized if you have to actively think about it,” Hill said.

Socialization begins with parenting, which does not occur in isolation but in cultural context. While, as Hill said, “I never met a parent who didn’t have great goals for their kids,” parents in different communities respond to children’s needs in different way.

Hill described different ways to view factors such as income level. Economic stress, for example, may “not depend on how much you make but the amount of stress you feel about the level of money you make.”

There is, she said, “no such thing as an objective worldview.”

Compare the opening ceremonies of the Olympics in Beijing and Vancouver, Hill said. The first emphasized precise, coordinated movements among masses of people; the second emphasized individuality.

Take the question, “Am I allowed to go through my daughter’s book bag?” That, too, depends on a worldview about privacy and protection. In some cultures, parents orient children to toys; in others they orient children to themselves. Or they might value personal choice, or they might emphasize the social good of fitting in with group behavior, Hill said.

“If we understand the belief system that drives different practices, we could better support children and families,” Hill explained.

Yet cultural beliefs are constantly shifting. “Culture allows us as a species to evolve before biology catches up with us,” Hill said. Consider how once in the United States, students never dared call a teacher by the first name; now this happens more frequently.

In the question-and-answer period, Radcliffe Fellow Lynne Jones, a child psychiatrist, relief worker, and writer, asked Hill about what public policy might emerge from her research.

Hill said her aim is to increase the understanding of how culture drives beliefs and behavior.

“One policy implication to think about is how people receive and validate information,” she said. “Who do they consider expert? If my goal is to support parenting practices, and I want to give them right and valid information but they see me as a cultural outsider that they don’t trust, they are never going to believe what I say.”