Leno is Man of Year 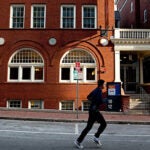 Join Harvard on the Move

The Hasty Pudding Theatricals of Harvard University has named comedian and talk show host Jay Leno as its 2011 Man of the Year. He joins Julianne Moore, recently chosen 2011 Woman of the Year.

The Man of the Year festivities will take place on Friday (Feb. 4). Hasty Pudding producersNikolus Ray ’11andMatthew Whitaker ’12 will roast Leno and present him with his Pudding Pot at 8 p.m. in the New College Theatre, prior to the start of the opening night performance of the 163rd production, “Kashmir If You Can.” A press conference will be held at 8:30 p.m.

Leno is a television icon and dedicated live performer who has entertained millions of people over his long career in comedy. Before he became host of the highly rated “The Tonight Show with Jay Leno,” he honed his comedy in clubs all over the country, often exceeding 300 dates per year. After moving to Los Angeles, Leno began his career in television and film, both writing behind the scenes and making appearances in shows such as “Good Times” and films including “American Hot Wax.”

In 1977, Leno made his first appearance on “The Tonight Show Starring Johnny Carson,” who was the 1977 Man of the Year. Leno took over as full-time host in 1992. He has never stopped touring on the comedy circuit and still averages more than 150 gigs a year, including weekly shows in Las Vegas. By keeping in touch with people, he continues to exude an “everyman” style and personality.

Leno has authored two children’s books, “How to be the Funniest Kid in the Whole Wide World (Or Just In Your Class)” and “If Roast Beef Could Fly.” A book on anecdotes, called “Leading with My Chin,” came out in 1998. He also has published four versions of “Headlines,” featuring his favorite funny newspaper clippings, and “Police Blotter,” of clips involving police stories, with proceeds going to various charities.

The awards are presented annually to performers who have made lasting and impressive contributions to entertainment. Established in 1951, the Woman of the Year award has been given to such notable entertainers as Meryl Streep, Katharine Hepburn, Julia Roberts, Jodie Foster, Elizabeth Taylor, and, most recently, Anne Hathaway. The Man of the Year award, established in 1963, has been given to Clint Eastwood, Bob Hope, Robert De Niro, Steven Spielberg, Harrison Ford, Anthony Hopkins, Bruce Willis, and, last year, Justin Timberlake.

For more information about the awards event, please contact press and publicity manager Learah Lockhart at 917.399.4627 or at press@hastypudding.org.