A march toward the arts 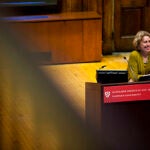 The announcement that the Silk Road Project will relocate to Harvard is the latest example of the University’s closer embrace of the arts since a presidential task force called in 2008 for a concerted effort to increase the presence of the arts on campus.

Merritt Moore ’11, a physics concentrator who took the 2008-09 academic year off to perform with the Zurich Ballet, said that break “gave me time to realize there is a change, a great change” in the profile of the arts at Harvard. “The hardest thing now is to say no to things, since there is so much opportunity, and it keeps on growing.”

Moore, one of three students on a new arts committee established at the recommendation of the Task Force on the Arts, is no longer shy about going from a physics lab to a dance rehearsal, she said, because the arts have support from Harvard’s administration.

“It gives encouragement to all the students to pursue something that a lot of times we would do under the table,” said Moore.

Harvard President Drew Faust, who established the task force, and noted cellist Yo-Yo Ma ’76 announced April 13 that the Silk Road Project, founded by Ma, would move its administrative offices from Rhode Island to Allston this summer.

The move means much more to the University than a new organization in Harvard’s property in Allston. It’s one more step to bring arts-making fully into the life of the University.

“This is an exciting moment for Harvard, the Silk Road Project, and the surrounding community,” said Diana Sorensen, dean of the arts and humanities, James F. Rothenberg Professor of Romance Languages and Literatures and of Comparative Literature, and member of the Harvard University Committee on the Arts (HUCA).  “This partnership between the University and the project will make it easier for Silk Road musicians and artists to collaborate with Harvard scholars, performers, and students, and is another example of the ways the arts are increasingly visible on campus and more present in teaching and learning.

Ma himself, a frequent visitor to campus, has already inspired a series of Silk Road-style courses at Harvard — classroom explorations of how the material, visual, and audible facets of art enhance traditional scholarship.

A class, taught by Harvard Shakespeare scholar Stephen Greenblatt, John Cogan University Professor of the Humanities, is featured in “Translating Encounters,” a student-organized exhibit of 17th century objects and documents that opened March 25 at Harvard’s Peabody Museum of Archaeology and Ethnography.

Lori Gross, Harvard’s associate provost for arts and culture, said the list of new arts-related projects, spaces, and additions to the curriculum has been growing rapidly since the release of the task force report. “The task force inspired and catalyzed people and organizations throughout the University,” she said.

One example is HUCA, the cross-disciplinary collection of 31 scholars, students, curators, arts practitioners, and administrators that has met regularly since December.

There have also been several new Web offerings launched since last spring: a University-wide arts portal that centralizes the arts calendar, a new site for Harvard’s Office for the Arts, and Poetry@Harvard.

Museum directors at Harvard also formed a group to boost collaborations between University collections and the curriculum. The Harvard Art Museum added a new position, a director of academic partnerships.

“My sense is the culture is changing,” said historian Robin Kelsey, chair of HUCA and the Shirley Carter Burden Professor of Photography at Harvard.

A cascade of practicing artists have visited Harvard since last fall in the Learning From Performers series at the Office of the Arts. Among them were Blair Underwood, Fred Ho, and Suzanne Vega. This spring, soprano Renée Fleming stopped by, along with musician-composer James Moody and Judith Jamison.

Zachary Sifuentes ’97-’99, an Adams House arts tutor who arrived on campus in the fall of 1993, has seen the same upward shift in support for the arts at Harvard. Arts-making was always there for those who wanted to do it, he said, but today it’s more available to “people who don’t consider themselves artists.”

The expanded presence is reflected in Harvard’s curriculum: Arts practice is now a part of 12 new General Education and departmental courses, and 15 freshman seminars. The courses, Gross said, “are making both the professors and students think differently.”

Kelsey taught “Photography and Society” last fall, a Gen Ed course that required an arts-practice component. His students had to set up an exhibit of either new or found photographs, accompanied by a “photo script,” a detailed conceptual plan for how the photos would be used.

The course was popular and effective, said Kelsey, and the creative component gave him a sharp tool for assessing how well his students were grasping the material.

In addition, more space in more buildings is being freed up, much of it to showcase student arts, in addition to exhibition spaces at the Graduate School of Design, the Carpenter Center, the Center for Government and International Studies (CGIS), and elsewhere. There also are rotating exhibitions at Massachusetts Hall, the 18th century building in Harvard Yard that is the seat of University administration.

One recent example of how an arts presence can electrify and energize a physical space on campus was the  “Bizarre Animals: An Evening of Contemporary Art Interventions” on March 26 at the Harvard Museum of Natural History.

Video, painting, and performance artists — many of them graduates of Harvard’s Visual and Environmental Studies (VES) program — took over the galleries to create artistic explorations of the animal world, real and imagined.

“Bizarre Animals” included a man cooking a steak and a woman in camouflage inside a dinosaur skeleton. It was organized by Carlin Wing ’02, a VES artist-in-residence last fall. A “quieter event” came the next day, Kelsey said, when a panel of practicing artists talked about the challenges and glories of making a living in the arts.

“These practitioners had learned, and learned as Harvard undergraduates, that arts practice is an intellectual inquiry, with every bit as much intellectual rigor as what academics engage in,” said Kelsey.

“And it’s an important message for all our undergrads to hear,” he said, “that this is not a career that’s about technique and craft so much as it is a career about deepening one’s understanding of certain intellectual problems, and doing it through material or visual means.”

Other examples of the stepped-up physical presence of the arts at Harvard abound across the campus.

An alternative space for performance, exhibition, and collaboration opened last November as the Laboratory@Harvard in the new Northwest Science Building on Oxford Street. There will be a  “silent rave” there on April 30 that combines science, theater, and art.

The American Repertory Theater, under the new direction of Diane Paulus ’87, brought its actors into Harvard Yard for a series of “happenings” last fall: dance numbers, movement classes, and one rave-like musical-chairs event.

This mobile public art took place amid new, intentional “Common Spaces” in Harvard Yard, including a “chairs” installation that lasted until the first snowfall. The  colorful, light chairs go back out into Harvard Yard in mid-April, some of them wearing lines from poems by Emily Dickinson.

As people use the chairs, they will be mixed up every day. So the lines of Dickinson’s poetry will “start to create new poems by themselves,” said Zachary Sifuentes, the idea’s creator. “People who use the chairs will be part of the art-making process themselves.” (He plans to record the new “found” poems every day.)

Inside Lamont Library’s Poetry Room, Sifuentes, who also teaches freshman composition at Harvard, will have a companion exhibit on Dickinson, complete with telescopes to peer at fragments of her work hidden in the exterior landscape.

Other telescopes, 19th century models from Harvard’s Collection of Scientific Instruments, will be on display. (Sifuentes said Dickinson, a famous recluse and agoraphobic, had a deep interest in science, and it informed her poetry.)

Gross called the Poetry Room installation an example of how the arts smooth the pathways between the arts, the sciences, and other disciplines.

Combining arts practice with academics makes sense at many levels, said Moore, the undergraduate dancer, whose physics studies now center on nano-materials and quantum computing. “The arts in general really allow one to try to break boundaries, and be daring and creative,” she said.

“Dance always helps the physics,” Moore added. “If I’m not dancing, my grades go down.”