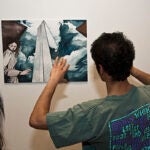 Reclusive and shy, Dickinson was rarely published in her own lifetime (she died in 1886), and seldom left her family home in Amherst, Mass. But she is world-famous today for an oblique, vivid style whose interiority and unconventional punctuation anticipated the modernist poetry of T.S. Eliot, Ezra Pound, Mina Loy, Marianne Moore, and others.

Dickinson, 31 years old when she began writing to Higginson, included four poems with her first letter. It began with a now-famous question: “Are you too deeply occupied to say if my Verse is alive?”

At Harvard, her verse is alive all over again, courtesy of “Fugitive Sparrows,” an exhibit of Dickinson poems rendered as visual art. It is on display in the Woodberry Poetry Room in Lamont Library through May 2.

The creator of the installation is Adams House art tutor Zachary Sifuentes ’97-’99. “Her lines behave like large flocks of sparrows,” he wrote in one exhibit card, “fugitive from apprehension.”

Last year, Sifuentes, who is also a preceptor in Expository Writing at Harvard, was reading an index of first lines, which is the only way to access Dickinson’s untitled works. He discovered that the first lines, read together, “create new poems by themselves.”

With many of her poems, added Sifuentes, “You can read the lines out of order, and they still make sense — to the extent Dickinson makes sense.”

He attended an opening reception for the installation on Tuesday (April 6). With him were about 30 other people, old and young. Unlike many other forms of art, said Poetry Room curator Christina Davis, “Poetry is something you can age into.”

In brief opening remarks, Davis — a poet herself — said the exhibit had inspired her to reread Dickinson’s letters. She quoted the poet’s famous opening question to Higginson, then reminded listeners of Dickinson’s not-so-famous following line, which itself anticipates a modernist literary sentiment: “The mind is so near itself — it cannot see.”

Dickinson employed dashes abundantly in her poems, said Sifuentes. This graphical oddity of expression was like the poet “skipping a stone across a pond,” he said, not “delving into a subject so much as grazing it from different angles.”

Sifuentes used different angles of his own — lenses, telescopes, a large-scale drawing, audio, a computer — to renew a reader’s experience of Dickinson’s poems.

Three poem fragments, on placards under trees outside, are only seen through telescopes set up in the Poetry Room, whose windows overlook green space outside Houghton Library. “We noticed smallest things,” one fragment reads, peered at from afar. “Things overlooked before / By this great light upon our Minds … .”

Two other poems, set in miniature type, can only be read through two vintage lenses in a display case. Included is a favorite of Sifuentes, one that “still terrifies me,” he said. “Drowning is not so pitiful,” it begins, “As the attempt to rise.”

Another Dickinson poem, the familiar “This is my letter to the World / That never wrote to Me,” was set in type by Sifuentes, who teaches letterpress classes at Bow & Arrow Press in Adams House. The result is a “metal book,” he said, that can only be read in an accompanying mirror.

The old lenses and spyglasses on display in the exhibit are on loan from the Collection of Historical Scientific Instruments at Harvard University. Sara Schechner ’79, A.M. ’82, Ph.D. ’88, the collection’s David P. Wheatland Curator, was on hand for the opening, ready to give a stand-up lesson on the old instruments.

“I like my collaborations with other parts of Harvard,” she said of the first-time project on Dickinson. “It was fun to mix with poetry here.”

Schechner, a historian of science, said the vintage lenses were variously meant to gather in, magnify, and project light. Pointing to one, she said, “it takes a lot of light and puts it in a small place,” acknowledging the apt analog to a great poem.

One of the spyglasses belonged to the late Frances W. Wright, who taught astronomy and celestial navigation at Harvard from 1928 to 1971. Dickinson, a close observer who wrote 200 poems that touch on science, probably would have liked the idea of lenses and scopes being turned on her elusive work — so little spied in her own time.

But unlike science, Dickinson’s poems hold back from an attempt at full revelation. Schechner observed that, as with telescopes so it is with poems: “One can get close — but only so close.”

Scholars say her poems use science to amplify the wonder of nature, not to define its reductive essence. To Dickinson, that essence remained ineffable. “This World,” she wrote in one poem, “is not Conclusion.”

The technical intercessions in “Fugitive Sparrows” are intended to interrupt “our normal ways of approaching and reading a poem,” said Sifuentes. The telescopes bring “you close, but you still have to focus and work and strive to actually read.”

He focused and worked and strove on his own to complete the exhibit’s most ambitious rendering of Dickinson into visual art. It’s a 90-inch by 45-inch drawing made entirely from her 1,775 poems — all 160,000 words and 450,000 letters, with each line handwritten separate and apart.

The project, said Sifuentes, cost him four months of effort — three or four hours a day, seven days of every week.

“It became an impressionistic process,” he said, and one energetic enough to use up 73 pigment pens. The completed work resembles — well — a flock of sparrows. The result, Sifuentes wrote on an exhibit card, has a way of “turning sight into a metaphor for reading.”

The lines in the drawing “behave the way her poetry does,” he also wrote of Dickinson, “tangential, acoustic, dwelling in a long and layered conversation. They take the form of hubbub on the eye.”

Starting April 14, the Dickinson exhibit will get a kind of second life, with lines from her poems printed on the colorful plastic chairs that are scattered over Harvard Yard in good weather as part of the University’s “common spaces” initiative.

“You can shuffle her lines around, and still create a poem,” said Sifuentes, who plans to record the rearranged chairs’ found poems every day.

In the preface to an 1890 volume of Dickinson’s work, published posthumously, Higginson wrote that “she habitually concealed her mind, like her person, from all but a very few friends.”

“Fugitive Sparrows,” supported by Lori Gross, associate provost for arts and culture, may help to reveal what Dickinson has concealed, and may make the shy poet a few more friends. Besides, the secret of Dickinson’s genius is well out, impossible to conceal again.

Making that point, Davis quoted another of the poet’s incisive lines: “No bird resumes its egg.”

The Poetry Room is open weekdays during Lamont Library hours, but is only staffed 9 a.m.-5 p.m.