In the clutches of the Taliban 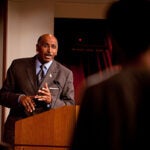 Listen to the people

Never has the path of international journalism been more perilous, says a Pulitzer Prize-winning reporter who was held captive by the Taliban for seven months in the mountainous tribal areas of Afghanistan and Pakistan.

During the Nieman Foundation’s annual Joe Alex Morris Jr. Memorial Lecture on Thursday (Feb. 4), New York Times correspondent David Rohde described his kidnapping within a wider context of increased threats to journalists who are now less likely to be seen as neutral observers by violent fundamentalists.

“Both what I found in the tribal areas and having that unfortunate kidnapping showed me the importance more than ever of the need for journalistic institutions that can send people out to do irreplaceable reporting on the ground and also support reporters if they’re kidnapped,” Rohde said.

The Internet’s instant platform has lured young journalists overseas, but “if something goes wrong, those journalists don’t have the backing of major institutions. I was lucky in my case; I did have that backing.”

Rohde was a seasoned reporter when he accepted an invitation to interview a Taliban leader in November 2008, just an hour outside Kabul. He had covered the Balkans conflict and had won a Pulitzer for describing the mass execution of 7,000 Bosnian Muslims. He won a second Pulitzer in 2009 as part of a New York Times team that covered Afghanistan and Pakistan. He returned to Afghanistan to work on a book.

In retrospect, he said, he should have realized that his kidnapping had long been planned. In harrowing detail, he described his captivity, including his young, fanatical Afghan and Pakistani guards who, through a lack of education and fervor, lived in an “alternative reality” in which America was waging war against Islam, neckties were a secret symbol of Christianity, and Christians sought to live for 1,000 years — which revealed their lack of faith in God.

Even though the United States had a policy against paying ransom, his captors believed that the U.S. government would be willing to shell out millions and release Islamic prisoners from Guantanamo Bay to gain Rohde’s release. When he tried to tell them about being held captive by Christian fundamentalists for his work exposing Muslim executions, his captors simply concluded they could get even more money for him.

While his captors had beliefs far outside mainstream Islam, he found that the Taliban were able to openly control large areas of Afghanistan and Pakistan, creating a “Taliban mini-state” with their own police patrols, schools, and road construction crews.

“What I realized very quickly in Pakistan was that the Taliban regime that the United States thought it had toppled in 2001 was alive and thriving; it had simply moved a few miles to the east,” he said.

Yet mainstream Afghans and Pakistanis do not necessarily support the Taliban. “The Taliban are oppressive when they rule,” he said, describing several executions. The only way to defeat them, however, is to destroy their safe havens in Pakistan, he said.

The Times and other media did not report Rohde’s kidnapping; he managed to escape in June 2009. He freely admitted that the news blackout raised troubling questions about favoritism for kidnapped journalists when others, such as contractors, are also nabbed.

During a lively question-and-answer period, Shankar Vedantam, a Nieman Fellow and Washington Post reporter, noted that many crime or kidnapping victims also prefer that “we don’t write about them at all, but we choose to write about them because we say it’s in the public interest.”  He added that many governments believe intense media coverage encourages terrorism.  “How do you wrestle with it?” he asked Rohde.

“Not very well,” Rohde acknowledged. He said he even has qualms about describing his captors, saying the Taliban may love to be perceived by Westerners as fanatical and greedy. “They want to be seen as irrational, they want to be terrifying,” he said. “I wrestle with whether I serve their purposes in writing their story. I don’t have a good answer.”

Rohde, who wrote a five-part Times series on his kidnapping, is on leave writing his book and working to help news organizations and families deal with kidnapping and to promote training for reporters in hostile areas. “I hope to help other journalists avoid the mistakes I made,” he said.

The annual Joe Alex Morris Jr. Memorial Lecture honors a Los Angeles Times reporter who was killed in 1979 while covering the Iranian revolution. For more information about the Nieman Foundation for Journalism at Harvard.