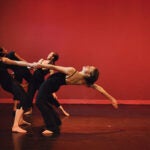 Uncovering the power of ritual in ‘The Rite of Spring’

In 1991 the Baseball Hall of Fame in Cooperstown, N.Y., paid homage to players from the Negro Leagues, an artifact of segregated America that had faded away three decades earlier.

During the event, a singularly magical moment was captured on audio tape. From the back of a room full of old ballplayers came a high, breathless voice: Toni Stone, the first woman to play professional baseball.

As if to summarize her life, she began, “I would like to say something.”

Journalist and Mount Holyoke College gender studies professor Martha Ackmann, a Radcliffe Fellow this year, is trying to bring that little-known voice back into the mainstream of American consciousness — to say something about the woman who broke racial and gender barriers in her pursuit of an athletic dream.

Ackmann outlined her pursuit of this offbeat baseball story to an audience of 50 this week (April 13) at the Radcliffe Gymnasium. Ackmann, whose previous book told the story of America’s first female astronauts, is at work on “Curveball,” the story of Toni Stone (1921-1996).

“Her story is as much about Jim Crow as about baseball,” Ackmann said — a tale of “determination and disobedience.”

It is also a story of loss, she added – a loss “of identity, self-respect, of what she loved the most.”

An athlete all her life, Stone cut short her professional career after just five seasons in the Negro Leagues. By 1954, she was back in Oakland, Calif., working as a nurse’s aide and caring for an ailing husband.

Stone — who also went by her married name, Marcenia Lyle Alberga — grappled with what Ackmann called her “imperfect opportunity” to chase a dream.

In Minneapolis, Stone grew up with the nickname “Tomboy” — a “special child,” said Ackmann, who liked to get into fights (with boys) and who excelled in every sport she tried, though “it was baseball she loved the most.”

Stone was 10 when her parents called in Father Keith, the parish priest, to talk her out of playing baseball. He ended up signing her up in the Catholic Midget League.

By age 15, Stone was playing with a men’s traveling baseball team, the Twin City Colored Giants, as well as in games in the local men’s meatpacking league. She studied baseball strategy from library books and hung around the ball field where the St. Paul Giants practiced, coached by Charles Evard “Gabby” Street, a one-time major league catcher.

The Alabama-born Street, pestered by the quick little infielder, let Stone practice with local boys at his baseball camp. Though reputedly a member of the KKK, he was so impressed with Stone that he gave her her first set of cleats.

When her younger brother Quentin talked about getting into sports, Stone lashed out. “You get your own dreams,” she said. “I’ve got mine.”

Her dreams took her to wartime San Francisco, where she moved in with a sister and started playing ball for a boys’ American Legion team and a club that “barnstormed” — that is, traveled great distances to play games.

The West Coast city, said Ackmann, was where people sometimes went to reinvent themselves. Stone, drawn to a black enclave called Jack’s Tavern, shaved 10 years off her age, met the man who was to become her husband, and — in time — started a professional baseball career.

In 1949, she signed on with the San Francisco Sea Lions of the West Coast Negro Baseball League, her first professional team. It paid $200 a month, with $2 a day for meals.

“She set herself up as a novelty,” said Ackmann — a role that she would sometimes reluctantly play throughout her baseball career. In New Orleans, Stone played for the Creoles, another men’s Negro League team.

Players went from town to town on a bus, careful not to violate Jim Crow rules that kept them out of gas station restrooms and locker rooms for white players.

Bus drivers traveled with the “green book,” said Ackmann — a guide to safe places to eat and sleep in the Deep South.

In 1953, Stone signed on with the Indianapolis Clowns as a second baseman. It was a team that mixed broad racial clowning with playing professional baseball. They were the Harlem Globetrotters of the baseball world. (Earlier Clowns players dressed up in fright wigs, whiteface, and grass skirts.)

The antics put Stone on the spot, said Ackmann. She knew she was there to be part of the fun, but she also wanted a part in the high-level play the Clowns represented on the field. (Hank Aaron had her spot on second base two years earlier, and as a hitter Stone faced the legendary Satchel Paige on the mound.)

Ackmann played some rare footage of a Clowns warm-up. Stone crouches wide and low in the batter’s box and takes a few strong cuts. She catches and throws with the easy grace of a professional.

“The play on the field was the least of Toni Stone’s concerns,” said Ackmann. “She dealt with loneliness and the double [difficulties] of racism and sexism.” She was resented by some fans, by baseball writers, and even by some of her fellow players, who bristled at her taking a man’s spot on the team.

To escape the rancor of other players, Stone took to staying overnight in bordellos wherever the team traveled — an “underworld of hospitality” that was a backup accommodation for blacks traveling in racially segregated areas, said Ackmann.

Despite the hardships, Stone endured, gaining during her playing days a measure of reluctant fame.

“They thought I was going to leave baseball and not come back, since things was so tough,” said Stone on that day in 1991. “Uh, uh. Baseball was right there.”