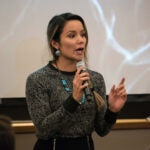 For decades, stories of drug trafficking and violence associated with illegal drug industries have influenced the international public perception of both Colombia and Mexico. On Nov. 17, 2017, two leading policy analysts and historians, Lina Britto and Froylán Enciso, who center their research on Colombia and Mexico, respectively, convened at the David Rockefeller Center for Latin American Studies to consider the longer histories of the two countries that paved the way for the emergence of booming drug industries. With a focus on regional conditions, Britto and Enciso discussed the factors that made Sinaloa in Mexico and La Guajira in Colombia especially vulnerable to trafficking economies and, thus, were transformed into hubs of illegal activity that spawned the extensive networks of illicit drug trade.

In the joint presentation, Britto and Enciso took turns discussing how the formation of illegal drug industries in Colombia and Mexico relates to the history of agrarian modernization, U.S. relations, and popular culture in each country. Both regions developed sophisticated international trade networks in the 20th century, whether from the Green Revolution in Sinaloa that followed the crash of the mining industry in 1907 or the sequence of booms and busts of the coffee, banana, and cotton industries in the Sierra Nevada Valley near La Guajira. When the agricultural industries faltered, these networks could be easily repurposed to circulate illegal drugs to international markets.

The scholars agreed that the role of the U.S., though it often goes unacknowledged, was critical in the development of drug industries in both countries. In Colombia, Britto explained that it was “the banana elite,” or merchants of the Boston-based United Fruit Company who had plantations in the Sierra Nevada and La Guajira zone, “who were experiencing the decline of the banana industry, and who established networks and routes of exportation of marijuana in the 1960s.”

Similarly emphatic in the conviction that international pressures fueled the establishment and consolidation of the Sinaloan drug industry, Enciso theorized several waves of what he terms “narco-imperialism.” Starting with the Inquisition, which used the control of spiritual practices as the pretext for persecuting indigenous people for their use of marijuana and peyote, “Mexico has been a playground for others to judge drugs,” Enciso stated. Dispelling the notion that the drugs implicated in the most notorious trade circuits emerged endemically, Enciso also clarified, “The first cocaine smuggling cases were not from Pablo Escobar. I found a case in the 19th century in Sinaloa of cocaine that was from the company Merck. It was German cocaine.”

Following the presentation, moderators Ana Villarreal, Professor of Sociology at Boston University, Ieva Jusionyte, Assistant Professor of Anthropology and Social Studies at Harvard, and Kirsten Weld, Associate Professor of the Social Sciences at Harvard, brought expertise from their research, posing questions to explore complementary topics. These included the role of the state in the drug industry of each country and the imprecision of the term “narcotrafficking” that has become a provocative buzzword that is used interchangeably with “the illegal drug industry” in popular discourse.