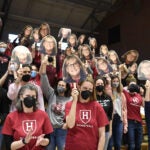 Kevin Young ’92 — poet, author, poetry editor at The New Yorker, and Andrew W. Mellon Director of the Smithsonian’s National Museum of African American History and Culture — released his first book for children, “Emile and the Field,” this month.

The lyrical picture book, illustrated by Nigerian American artist Chioma Ebinama, follows a young boy named Emile as he experiences changing seasons at a beloved local field in his neighborhood. In the story, Emile relishes the solitude of the field during the spring, summer, and fall. But as the field’s terrain changes and other children appear to use the space in winter, he must learn to share and invite others in. Young’s lyrical prose and Ebinama’s illustrations celebrate the connection between children and the natural environment.

Young has published 14 books of poetry and prose and edited nine volumes. A recent edited volume is the critically lauded anthology “African American Poetry: 250 Years of Struggle & Song.” Prior to his position at the Smithsonian, Young served as the director of the New York Public Library’s Schomburg Center for Research in Black Culture. He holds an Master of Fine Arts degree from Brown University and a bachelor’s degree from Harvard.

Young was the featured speaker for the 151st Annual Meeting of the Harvard Alumni Association (HAA) in 2021 and spoke to the Gazette in 2020 about his experiences on campus and goals for telling rich stories of “Black lives and history.”