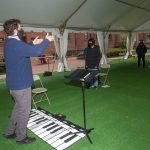 A taste of the old normal

Award-winning poet, editor, and recently-named Andrew W. Mellon director of the Smithsonian’s National Museum of African American History and Culture, Kevin Young ’92 will be the featured speaker for the 151st Annual Meeting of the Harvard Alumni Association (HAA).

Most recently, he edited the acclaimed anthology “African American Poetry: 250 Years of Struggle & Song,” “an implicit but unassailable case that Black poetry is central to American literature,” according to the New York Times Book Review.

“Kevin Young is not simply one of the most talented poets of his generation,” said HAA President John J. West Jr., M.B.A. ’95, who will host the event. “He is a chronicler, curator, steward and teacher of history, using his significant intellectual and creative powers to safeguard, celebrate, and tell the stories of America’s difficult past. We all benefit from his voice, his wisdom, and his leadership.”

“It’s an honor to return to talk to the Harvard Alumni association about my time at Harvard and our own tumultuous times,” said Kevin Young. “I am eager to speak to the challenges and opportunities facing our cultural institutions, as well as read poems that take in history and Harvard too.”

In January, Kevin Young took the reins as the new director of the Smithsonian’s National Museum of African American History and Culture, the nation’s largest museum dedicated to telling the African American story and the newest museum in the Smithsonian complex. The museum has welcomed more than 7.4 million visitors through its doors since it opened in 2016 and has engaged millions more through digital programs and resources reaching a global audience. It will launch its new Searchable Museum Initiative this fall,  a complementary digital experience to the museum’s inaugural exhibitions, as well as debut a new in-person exhibition, “Make Good the Promises: Reconstruction and Its Legacies.”

Young spoke with the Gazette last fall about taking on the museum directorship, his passion for language, his Harvard years, and his goal of telling more “stories of Black lives and history.”

A professor of English and creative writing for two decades, Young began his career in museums and archives at Emory University in 2005, first as curator of the Raymond Danowski Poetry Library (believed to be one of the world’s largest private libraries before coming to Emory) and later as the curator of Literary Collections, while serving as Candler Professor of English and Creative Writing.

He later served as the director of the New York Public Library’s Schomburg Center for Research in Black Culture,considered the nation’s leading library for research on global Black culture.

Young’s published works span thirteen books of poetry and prose and nine edited volumes. His most recent collection, “Brown,” was published in 2018. Bunk: “The Rise of Hoaxes, Humbug, Plagiarists, Phonies, Post-Facts & Fake News” (2017) was longlisted for the National Book Award and a National Book Critics Circle Award in nonfiction; both volumes were named New York Times Notable Books. His third poetry collection “Jelly Roll: a blues” (2003) was a finalist for both the National Book Award and the Los Angeles Times Book Prize. His nonfiction debut “The Grey Album: On the Blackness of Blackness” (2012) won the PEN Open Award, with the judge saying Young shows “us how Black identity is indispensable to American culture.”

In addition to his degree from Harvard, he earned a Master of Fine Arts from Brown University. He received a Stegner Fellowship at Stanford, as well as fellowships from the Guggenheim Foundation and the National Endowment for the Arts. He is active in the national arts and culture community, serving as chancellor of the Academy of American Poets since 2020 and as a member of the American Academy of Arts and Sciences and, most recently, the American Academy of Arts and Letters.

While at Harvard, Young was one of the youngest members of the Dark Room Collective, an influential group of Boston-area Black writers. He met and befriended fellow undergraduate Colson Whitehead ’91 (who has become a twice Pulitzer Prize–awarded novelist) while helping to revive “Diaspora,” a Black student literary magazine whose former contributors have also gone on to earn MacArthur “Genius” Grants and Academy Awards.

Now Young will reconnect with his fellow alumni as the featured speaker at the upcoming virtual alumni association meeting this year, where all members of the Harvard alumni community, including the most recent graduates in the class of 2021, will gather remotely on June 4 at noon.

HAA organizers anticipate a robust turnout for the virtual event, building on a year of successful engagement with alumni that led to record-breaking participation in virtual programs of all kinds.  “The annual meeting is a highlight of the year for our alumni, with all of its traditions, pomp and circumstance,” said Philip Lovejoy, executive director of the Harvard Alumni Association. “We look forward to the time when we all can again gather in person and renew and celebrate the special bonds that connect them to each other and to this institution. And yet, we approach this year’s meeting having seen this community meaningfully adapt to a virtual world — with creativity, collaboration, and a spirit of inclusivity that brought more alumni together from all over the globe than ever before.” Lovejoy noted that the event has the potential to be the largest-ever gathering of alumni.

In addition to Young’s address, and remarks by President Larry Bacow, the program will recognize Chief Marshal Anurima Bhargava ’96  and honor the Harvard Medalists from 2020 as well as this year’s medalists. The Harvard Choir, Harvard Radcliffe Orchestra, and Harvard Band will provide musical features.

The 151st Annual Meeting of the Harvard Alumni Association will take place virtually on Friday, June 4, starting at noon E.S.T.