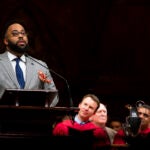 The Harvard Art Museums announce a transformative gift of 21 works of 18th-century American silver from the collection of Daniel A. Pollack and Susan F. Pollack. The gift comprises a range of finely made vessels and table implements intended for domestic use, including cups, bowls, spoons, tankards, and teapots crafted by noted silversmiths from Boston, New York, Philadelphia, and Trenton, New Jersey. There is also a stunning caudle cup, an example of ecclesiastical silver made by Edward Winslow and believed to have been used during communion at First Congregational Church in Milford, CT. The Pollacks’ gift strengthens the museums’ noted holdings of 17th- to 20th-century silver and comes at a time when curators and postdoctoral fellows are working to reimagine the balance among paintings, sculptures, and design objects on view in the galleries.

Highlights of the gift include, from Boston-based silversmiths, a pair of ragout (serving) spoons from 1786 by Paul Revere, Jr., and a c. 1765 rococo-style cream jug and c. 1775 porringer (small bowl) with a keyhole-pattern handle by Benjamin Burt; a soup ladle with a shell-shaped bowl from c. 1772 and a waiter (small salver) from c. 1765 by the pioneering Jewish silversmith and philanthropist Myer Myers of New York; and an apple-shaped teapot from c. 1745 by Joseph Richardson, Sr., for prominent Quakers Hannah and William Logan, as well as a coffeepot by Richardson’s sons, Joseph Jr. and Nathaniel, both of whom trained with their father in Philadelphia. These are the first works by the Richardsons to enter the museums’ collections. The earliest object from the gift is the aforementioned caudle cup from 1707 by Edward Winslow of Boston.

Over the next six months, select objects from the Pollack gift will be installed in galleries on level 2 of the museums. By mid-March, the Winslow caudle cup and the Myers soup ladle, among other objects, will be installed in the silver cabinet. By mid-May, the case featuring design objects in the museums’ Atlantic World gallery will highlight a rare two-handled silver punch strainer designed in the 1760s by Daniel Parker of Boston. By late July, the Pollack Arcade gallery on the second floor will host a case of 14 objects from the gift. Interpretive labels for the case will address Daniel Pollack’s longstanding commitment to American art at the Harvard Art Museums while also foregrounding the global threads of racialized labor and colonial trade at the heart of America’s colonization and our national becoming.

This gift of silver follows Daniel Pollack’s passing in October 2019 and builds upon a number of other significant gifts and generous support from the Pollacks over the last 17 years. An ardent supporter of the museums, Daniel was a member of the Director’s Advisory Council and served as chair of the American Art Curatorial Committee. The couple’s commitment also includes contributions toward the renovation and expansion of the Harvard Art Museums (which reopened in the fall of 2014) as well as the naming of four arcade galleries on the second floor overlooking the Calderwood Courtyard.