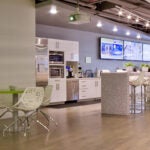 The Department of Defense recently announced the winners of their 2020 Multidisciplinary University Research Initiative (MURI) program. The agency received 365 proposals and awarded 26 grants. In a rare feat, they selected two professors from the Department of Chemistry and Chemical Biology — Daniel Nocera and Kang-Kuen Ni — to lead multi-disciplinary teams in designing the next generation of military and commercial technology.

“Modern science and engineering problems often intersect more than one scientific discipline,” said Bindu Nair, the deputy director for basic research at the Department of Defense, in a press release. Multidisciplinary effort “accelerates research progress to enable more rapid R&D breakthroughs by cross-fertilization of ideas, and can hasten the transition of basic research findings to practical applications.”

Daniel Nocera, the Patterson Rockwood Professor of Energy, will use his MURI to work on oxygen harvesting and storage in the ocean. For example, if a diver descends into the deep sea with a limited amount of oxygen, could a tool let them extract oxygen from the surrounding waters and stay down there longer?

Nocera and his multidisciplinary, cross-institution team of experts, which includes Jarad Mason, assistant professor of chemistry and chemical biology will design technology to harvest pure oxygen from undersea environments of different temperatures and depths. Ultimately, their work could help create the next generation of diving suits capable of extracting and storing oxygen mid-dive.

Kang-Kuen Ni, the Morris Kahn Associate Professor of Chemistry and Chemical Biology and of Physics, will work on a problem of precision. A pioneer of ultracold chemistry, Ni has used colder and colder temperatures to forge molecules from atoms that would otherwise never react. Cooled to such extremes, atoms and molecules slow to a quantum crawl, their lowest possible energy state. There, she can manipulate molecular interactions with utmost precision. Recently, her lab performed the coldest chemical reaction and saw, for the first time, a slowed-down version of two molecules breaking and forming bonds.

With her MURI, Ni has formed a team of experts from chemistry, quantum information, precision measurement and physics to take this work further and achieve the same level of control over molecules as she has over individual atoms. With that power, she will investigate how specific molecules behave in the quantum realm, which could lead to far more sensitive sensors, processors and transducers, as well as advanced material science and drug design. Her team’s work will also add more rungs on the ladder to quantum computers.

Previously, the MURI helped launch technologies like laser frequency combs — now the gold standard in frequency control for precision in navigation and targeting — atomic and molecular self-assembly projects, which advanced nano-manufacturing, and the entire field of spintronics.

This year’s 26 winning teams earned an average of $7 million for their five-year research projects. Nocera and Ni’s teams include collaborators from nine different institutions including Harvard.