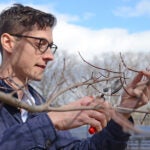 Harvard Astronomy department chair Abraham Loeb has been nominated to the President’s Council of Advisors on Science and Technology (PCAST). The council advises the president of the United States on science and technology.

Loeb is the Frank B. Baird, Jr. Professor of Science and the longest-serving chair of Harvard’s Astronomy department in the Faculty of Arts and Sciences. He was also the founding director of the Harvard Black Hole Initiative. Among a slew of accolades and appointments, Loeb was chosen in 2012 as one of TIME Magazine’s 25 most influential people in space. He has written six books and over 725 papers on topics ranging from black holes to the first stars to the search for extraterrestrial life.

“I am delighted to join PCAST, especially at this challenging time — when scientists must help the fight against COVID-19 and do their best to boost our nation’s health and prosperity,” Loeb said.

He noted the service will not interfere with other academic or research commitments.

The council will ultimately include 16 chosen members. Kelvin Droegemeier, the director of the White House Office of Science and Technology Policy, will serve as the chair and 17th member. Droegemeier visited Harvard in January and held a closed door event on the U.S. research environment.