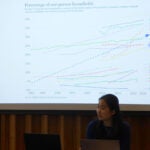 “Steel,” a six-part American history cycle, will bring to life the Age of Steel between the Civil War and World War I. It will be directed by Claire van Kampen, who directed “Nice Fish” for the Guthrie in 2013 and the A.R.T. in 2016. Van Kempen has since directed at Shakespeare’s Globe and received great praise for her original West End and Broadway play “Farinelli and the King.”

At the core of “Steel” is the 1892 Battle of Homestead (Pennsylvania) when, during a lockout, thousands of workers at Carnegie Steel Co. clashed with privately hired security guards. The battle resulted in numerous deaths and is considered pivotal to the history of U.S. labor relations.

Tony, Olivier, BAFTA, and Academy Award-winning Rylance began reading about the Homestead strike in 2003 while touring with the Shakespeare’s Globe production of “Twelfth Night.”

“I was looking for a story for Shakespeare’s Globe with two strong protagonists,” said Rylance. While in Pittsburgh, he visited the home of Henry Clay Frick, and “that was the beginning.” Frick, the King of Coke, and his boss, Andrew Carnegie, the King of Steel, are two of the most successful industrialists and philanthropists America has ever produced. Over the years, Rylance and Reder have returned to Pittsburgh many times to better understand the conditions that produced such remarkable industry and the related costs.

The co-commission provides for the development and realization of the first two parts in a six-part series. “It’s a story worthy of Shakespeare,” said Rylance. “We should never forget the role of labor and industry and what it’s done for a nation. This story is essential to American culture. It shaped where we are now.”

Rylance has a long history with both theaters. In 1991, he appeared as the title role in “Hamlet” and as Treplev in “The Seagull” at the A.R.T. Rylance first appeared at the Guthrie in 2003 as Olivia in the Guthrie WorldStage Series presentation of “Twelfth Night.” In 2013, he returned to write and perform in the Guthrie-commissioned production of “Nice Fish,” which was inspired by poet, Louis Jenkins. A new production of “Nice Fish,” directed by van Kampen and starring Rylance, premiered at the A.R.T. in 2016 and transferred to Brooklyn Academy of Music and London’s West End later that year where it was nominated for the Olivier Award for Best New Comedy.

“I’m delighted for A.R.T. to be collaborating again with Mark, Claire, and the Guthrie on this project that will explore the stories of these complex men whose actions left indelible marks on the United States,” said Borger.