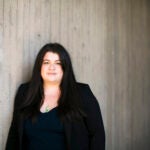 Creative process and Jewish tradition were central to a lively conversation last Tuesday, as Nobel Prize-winning poet Louise Glück delivered the Center for Jewish Studies’ annual Doft Lecture. The poet was welcomed to Harvard by David Stern, director of the center and a professor of comparative literature, and John Coogan University Professor of Humanities Stephen Greenblatt.

Following Stern’s introduction, Greenblatt discussed the push and pull of Judaism in his own life. Seeing something of this “enigmatic relationship” in Glück’s work, he spoke of the weight of Judaism’s cultural and literary inheritance. Finally, admitting that he might be reaching too far to try to connect Glück’s work with religion, he praised the Cambridge-based poet for the achievement and intensity of her art. “It is she who is doing us a singular mitzvah,” Greenblatt said.

Glück, whose paternal grandparents were Hungarian Jews, responded that some of her work does engage with the inheritance noted by Greenblatt. The father of the twin infant protagonists of her new work of short fiction, “Marigold and Rose,” for example, is only half Jewish, but “has been afflicted with the full complement of Jewish guilt.”

Glück proceeded to read a selection of her work, from some of her earliest poems through “Marigold and Rose.” “Legend,” from the 1985 collection “The Triumph of Achilles,” seems to reference her family’s experience directly:

My father’s father came
to New York from Dhlua:
one misfortune followed another.
In Hungary, a scholar, a man of property.
Then failure: an immigrant
rolling cigars in a cold basement.

… in such a world, to scorn
privilege, to love
reason and justice, always
to speak the truth —

which has been
the salvation of our people
since to speak the truth gives
the illusion of freedom.

Kicking off the question-and-answer session, Greenblatt asked the poet about her experience of Judaism as a child.

“Briefly, all of it,” Glück said, describing herself as “a child who had many lessons.” However, unlike her piano, flute, and ballet lessons, the religious teaching didn’t stick. A student who was “not good at languages” was not going to excel at Hebrew school.

“This was deeply troubling to me,” she continued, “so I tried being the worst at it.”

Although Glück failed in her effort to become the terror of the classroom (only succeeding in “being unpleasant”), her parents eventually gave in and allowed her to quit. Away from school, she attended High Holy Day services and fasted on Yom Kippur, the Day of Atonement, “sometimes.”

Questions from the audience focused on composition. But if anyone hoped to learn of an organized system that could be duplicated, they were out of luck.

“Every single poem has its own story,” Glück said. “Some take three minutes. Some take years.”

Nor does she follow a strict writing regimen. “I don’t sit at my desk and engage in my practice,” she said. That is not to say she never tried, only that she found the effort unproductive. “The anxiety was worse than the anxiety of doing nothing,” she said.

On the topic of revision, she acknowledged occasional frustration. “Sometimes I realize a poem is nowhere near finished, but I’ve played all my cards,” she said. Among other tactics, she might change the syntax: “It will jar the poem. Maybe.” Beyond that, listening to readers or adding another voice sometimes helps, she said.