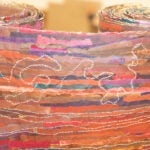 Book as tree, inside and out

As a child in Costa Rica, Irene Soto Marín was seemingly “always asking the wrong questions.”

Once a Sunday school teacher told the story of how a mourning Job scraped his skin with pottery shards. Soto Marín found it puzzling. “Was that a normal way to mourn?” she asked. That’s not the point, her teacher said, he’s suffering. A few classes later, Soto Marín moved on to finances in Jesus’ time: “What was the actual market value of 30 pieces of silver back then?” she wondered. “How much money was he making?”

Today, Soto Marín is still curious about ancient pottery and money, but now she’s digging up answers herself. An economic historian, archaeologist, and numismatist, Soto Marín joined Harvard as an assistant professor of classics in July. By studying small artifacts from Late Roman Egypt — coins, rope, textiles, ceramics, papyri, and even ancient wine turned to sludgy gunk — Soto Marín tries to understand daily life in Ancient Egypt but also bigger ideas, like the colony’s economic role in the Roman Empire (which might be greater than previously thought), early currencies, and tax systems. She also has a few thoughts about modern monetary systems, like the eurozone and cryptocurrency.

“You have to look at the minute to be able to understand the big picture,” Soto Marín said.

She probed the minute throughout most of her studies, which included an undergraduate degree in ancient studies and anthropology from Barnard College and master’s and graduate degrees from New York University’s Institute for the Study of the Ancient World. And tiny, ancient coins hold a special interest for her. “One individual coin is not going to give you much information,” she said. “But when you look at them in patterns, and as a series, you start seeing clues about what the monetary economy was like.”

“You have to look at the minute to be able to understand the big picture.”
— Irene Soto Marín

Unlike the ornate coins from ancient Syracuse or Greece, the ones Soto Marín studies are “not so beautiful.” But their appearance didn’t affect their value, and neither did the material (mostly silver and gold) from which they were made. During the period Soto Marín studies, when the Roman Empire took over Egypt and forced it to adopt their coinage, coins slowly lost their nominal value,  and in the case of small denominations, only the state guaranteed its worth.

They were also one of the best forms of propaganda.

When a new emperor or usurper took power in Egypt, one of their first acts was to mint coins with their likeness to broadcast their authority throughout their empire and beyond, said Soto Marín. It is a practice that somewhat continues today, most notably in Great Britain. Not surprisingly, Soto Marín has had some questions about this, particularly now that Queen Elizabeth II is gone. Will they melt down her image to make way for King Charles III? Yes, her British colleagues told her. But coins from King George VI still popped up in the 1970s, 20 years after his death. “It’s something that you see also in the Roman Empire,” Soto Marín said. “Coins of emperors continue to circulate even long after they’re dead.”

Ancient coins can reveal far more than who was in charge, and Soto Marín has been especially interested in Egypt’s role in the Roman Empire’s economy. “Most of the books about the Roman economy very tangentially touch Egypt, as if the main Roman economy was only Western Europe, Greece, Turkey, and North Africa,” she said. “Egypt gets left aside, but I think it was one of the big, exploited provinces that were able to give a lot of stability and goods to the Empire.”

Egypt, known as the Roman Empire’s “breadbasket,” produced much of the empire’s grain. But it also provided Romans with military uniforms, glass, and rope, Soto Marín said. Because of its location, the colony acted as a crucial trade hub. Spices were ferried across the Red Sea from India, and traders trekked from the sub-Saharan kingdom of Aksum or further south. Referencing a database of about 45,000 coins of different lands from her chosen period, Soto Marín can track how much Egyptians engaged in foreign trade — and it turns out it was a lot. About half the coins found in Egypt were foreign, indicating a high rate of exchange of goods. Soto Marín is currently writing a book about the province’s role in the Roman Empire’s economy.

Although much of Soto Marín’s work is with coins, they aren’t her favorite historical tidbits. “There is a sweetness in the papyri that I don’t get from coins or pottery,” she said. “It’s this sense that humans are still humans.” Scraps of papyri preserve Ancient Egyptian chatter in the form of ancient Post-its, shopping lists, dinner invitations, and letters. Mothers chastise their sons for not writing. Teenage boys complain their fathers won’t take them to the capital, Alexandria. Many have timeless concerns about rent and marriage. “They are people just like us who didn’t have iPhones,” Soto Marín said. “I tend to think that anything from antiquity can be brought to today.”

As for cryptocurrency, another modern trend that sidesteps physical money altogether, Soto Marín has doubts whether it will last. “Whether they come and go, my hunch is people are tied to things. Paper is still important to us; coins are still important to us. Even with emojis, you see gold coins or the pot of gold. I think this is embedded culturally. It might have started just for gold’s longevity, but I think now there’s a cultural trust in gold.”

Next, Soto Marín will co-direct an excavation at a site called Karanis in the Fayyum Oasis of Egypt — the first time she’ll be leading a dig. “We’re an almost all-female team, so that’s really empowering,” she said.

Others have studied the site before but, as usual, Soto Marín has a few more questions to ask.