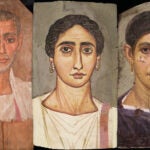 Face to face with ancient Egyptians

It was a powerful night at Sanders Theatre on Thursday as the Hutchins Center for African and African American Research returned after three years to award the W.E.B. Du Bois Medal to seven luminaries, honorees who exemplified the award’s theme of extraordinary commitment to social justice.

“I’m deeply overwhelmed by this moment for so many reasons,” Laverne Cox, actress, LGBTQ activist, and honoree, told the exuberant crowd, before quoting renowned author and activist bell hooks. “She was aware that she knew that all of us have the capacity to become oppressors … and she always encouraged us to think critically and always live in a space of self-interrogation around ways in which we can become oppressors. She was a love warrior. Bell said that ‘there can be no love without justice.’”

The W.E.B. Du Bois Medal is the highest honor given by Harvard in the field of African and African American Studies.

“It’s been a long three years since we last gathered here at Sanders Theatre for the shining ceremony, and we’re thrilled at long last to be able to celebrate in person at our annual rite honoring excellence in and outstanding contributions to Black society and culture,” said Henry Louis Gates Jr., the Alphonse Fletcher University Professor and director of the Hutchins Center.

The night was emotional but not without laughs. Adichie shared how she got her young nephew to attend the event. “I must tell you that when I called [my nephew] to ask if he would like to come, I said, ‘This is a big deal. I’m very excited about it.’ He said, ‘Mmm, Auntie, I don’t know.’ So, I said, ‘Well, Kareem Abdul-Jabbar is going to be there.’ And then he said, ‘What time, Auntie?’” She then asked Abdul-Jabbar if he would take a photo with her nephew.

Abdul-Jabbar was the final honoree of the night. The towering legend recounted the story of the Pan African Congress in 1921, which was attended by his great-uncle, physician and racial equality activist John L. Alcindor. That event prompted Du Bois to write his manifesto to the League of Nations about inequities in the distribution of wealth.

“That same statement could just as easily have been written today,” Abdul-Jabbar said. “During our struggles with COVID-19, that disparity only increased. I mentioned this because it’s important that we keep alive the spirit of Dr. Du Bois not just by honoring his name, but by continuing his fight for equality for all people.”

The basketball great added that although he did not know the great-uncle who attended the Congress with Du Bois, “it brings me great pleasure to think that he would be proud that I carried on the family tradition of speaking out for social justice.”