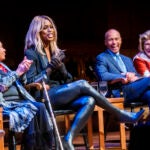 On the 100th anniversary of discovering Tutankhamun’s tomb, an Egyptian jewel comes to Harvard Museum of the Ancient Near East

One hundred years ago this November, archaeologists discovered the tomb of King Tutankhamun. The 18th Dynasty king (1336–1327 B.C.), who came to the throne at the age of 8 or 9, was buried with more than 6,000 objects. One of the most spectacular, a lion-legged throne, gilded and inset with precious stones, was reproduced in 1929 in teak with ivory and mother-of-pearl inlays, faithfully replicating the detailed iconography of the original. In celebration of the centennial of that discovery and the bicentennial of the deciphering of Egyptian hieroglyphs, that 1929 reproduction, fully restored, has come to the Harvard Museum of the Ancient Near East (HMANE).  The museum is building a display case for the throne, which is scheduled to go on view to the public by the end of the year.

“The craftsmanship of this modern Egyptian furniture maker has created a stunning piece,” explained HMANE director Peter Der Manuelian. Commissioned by American businessman Thomas Jefferson Penn, the throne is one of two copies rendered by Cairo artisan Elias Hatoun. Although the reproduction lacks the glitter of the original, the 1929 throne replicates both its style and symbolism. (All the original Tutankhamun objects went to the Egyptian Museum in Cairo and have now moved to the new Grand Egyptian Museum, due to open this fall.)

To illustrate, Der Manuelian, the Barbara Bell Professor of Egyptology, pointed out the portraits of King Tut and Queen Ankh-es-en-Amun on the chair’s back. Both have the elongated almond-shaped eyes of the original, and Tut, depicted lounging on his throne, also displays a distinctive body type, with long, loose arms; heavy thighs; and a slight pot belly. While the androgynous features and exaggerated body have led some to suggest that the boy king had pituitary gland problems, Der Manuelian dismissed that outdated theory, pointing out that the image is, instead, a highly accurate reproduction of the artistic style of the age.

“Everyone at this period was represented that way,” he said. “It’s an art style that Tutankhamen’s father ushered in to try to differentiate himself from previous eras. It’s an unmistakable phase in Egyptian art.”

Unmistakable as well is the history portrayed on the throne. On the piece’s back and sides, different cartouches — ovals containing royal names in hieroglyphs — represent the “rival elements of Egyptian religion duking it out” during Tut’s reign, as Der Manuelian put it. One cartouche, visible on the chair’s side, contains a wide, white disc representing the sun; it depicts Tut’s original name: Tutankhaten. This name, which translates as “living image of [the sun god], Aten,” reflected the new solar-focused religion that Tut’s father, Akhenaten, tried to establish. Aten worship is also reflected in the rays of the sun on the chair’s backrest, which end in hands, one of which offers the ankh symbol — representing “the breath of life,” said Der Manuelian — to Tut.

That religion failed during Tut’s 10-year reign, however, and the worship of the traditional god Amun was re-established, prompting the pharaoh to change his name to Tutankhamun (“the living image of [the god] Amun”). This name, in which the sun is replaced by different hieroglyphs (including the chessboard-like game of senet), is depicted in the cartouche above his head and crown.

“This throne embodies that tumultuous history,” noted Der Manuelian. (The museum is waiting for the completion of a display case for the throne, and Der Manuelian hopes to display it by the end of this centennial year.)

Other details reflect the sprawling kingdom over which Tut ruled. Heraldic plants representing upper and lower Egypt are bound together on the chair’s leg bracing. (This traditional binding is missing on the original, possibly lost to time, and was filled in by Hatoun in 1929.) The serpent goddess, who spreads her wings on the throne’s arms, wears a double crown, representing both parts of his realm. On the chair’s back, four serpents guard the king from any unseen evil.

“Covered in lavish detail, the throne is an exquisite example of what the royal workshops were capable of during one of ancient Egypt’s most prosperous dynasties,” said Der Manuelian. “Hatoun has done justice to the ancient craftsmen, and the throne is a contribution to Egyptology and to Egyptomania at the same time.” 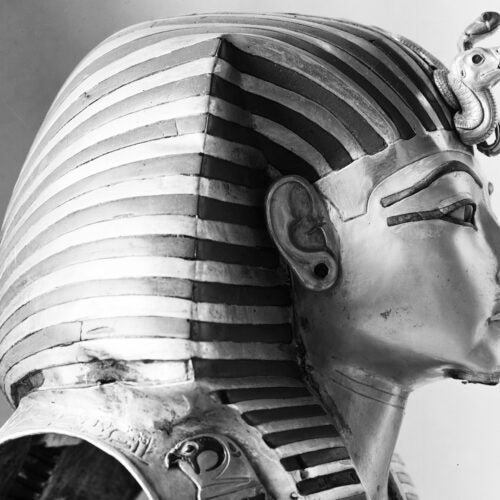 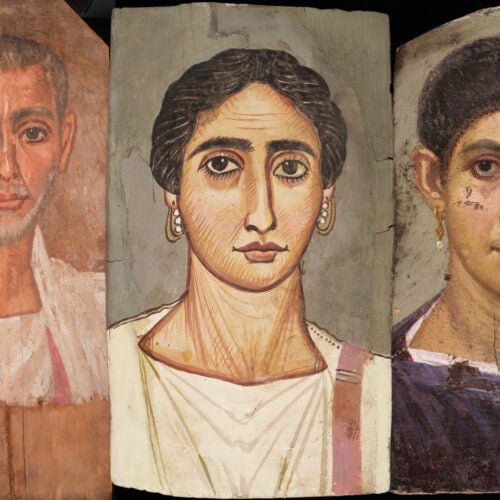 Face to face with ancient Egyptians 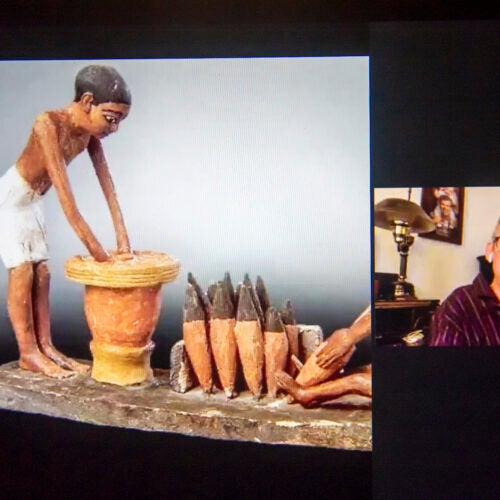